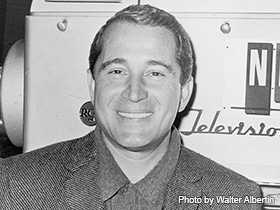 Perry Como was born in Canonsburg, Pennsylvania. His parents were Italian immigrants, and his dad worked as a mill hand to support the family. Perry was the seventh of thirteen children; he worked for a barber to make extra money. In 1933, he auditioned for Freddy Carlone's band while vacationing in Ohio. Later, he was one of the vocalists for Ted Weems' band. After Ted Weems broke up the band, Perry went on to be on the Supper Club. After making three movies and realizing he didn't enjoy acting, Perry went back to television. He also continued to record songs, and he became the first recipient of the "Gold Record" Award. Como died on May 12, 2001, after sixty successful years in show business.

Born Pierino Ronald Como on May 18, 1912 in Canonsburg, Pennsylvania, Perry Como became one of the other original "pop-stars." His father, Pietro, was a mill hand who immigrated from Palena, Italy with Perry's mother, Lucia. Perry was the seventh of thirteen children and he had to work after school at a local Canonsburg barber shop. When he was younger, Perry enjoyed performing at local weddings, but he was more interested in becoming Canonsburg's best barber. During high school, Como operated his own barber shop, and in 1933 he married his high school sweetheart, Roselle Belline. After Como became famous, the couple managed to keep their three children out of the spotlight. When talking about his wife, Como said "Roselle always stood by me" (Mondello). They remained married for sixty-five years, until Roselle's death in August of 1998.

Como's journey to fame began in 1933 when he auditioned for Freddy Carlone's band while vacationing in Ohio. While in the band, he received a salary of twenty-five dollars a week. However, Como didn't become popular until he joined Ted Weems' band three years later (Ted Weems was also a Pennsylvania native), and became their feature vocalist. The band was already successful by the time Perry joined; his first record with the band (also his first record ever) was "You Can't Pull the Wool Over My Eyes." The nationally-know band made weekly radio broadcasts in the 1930s. Ted Weems' band was an important stepping stone in Como's long career.

After Weems dissolved the band in 1942, Como went to CBS. He sang on CBS for a couple of years, but he didn't achieve extraordinary success there. Como was on the verge of giving up his singing career. He wanted to return to his family and his original profession, but he wasn't destined for an early retirement. NBC offered Como a contract to star on NBC's Supper Club (a radio show broadcast Monday through Friday) along with Jo Stafford. The show became popular, and it was moved to Friday night in the late 1940s; Como continued to be a featured vocalist on the show, he was also supported by the Mitchell Ayres Orchestra and the Fontane Sisters. The shows consisted of comedy routines, dancing, and singing, which allowed Perry to showcase his charismatic personality. When the show was starting out Como had to wear neckties and business suits, he later wore cardigan sweaters (nicknamed "Perry Como" sweaters by his fans). The program was moved to half-hour Sunday slots to compete with Ed Sullivan's program, Toast of the Town. Perry Como liked to keep himself busy; in addition to Supper Club, he performed at the Paramount Theatre in New York City and the Steel Pier in Atlantic City. According to David Hamid, part owner of Steel Pier, "Perry Como was the heartthrob of the ladies..." (Mondello). Even Hollywood approached Perry, trying to capitalize on his popularity. He starred in three movies: Something for the Boys (1944), Doll Face (1945), and If I'm Lucky (1946). Como didn't have any delusions of grandeur about his movie career, "I was wasting their time and they were wasting mine" (Mondello).

Television was another story; his singing style and personality were perfect for this new medium in entertainment. "His baritone voice, intimate and personal, complemented his affability and sincerity" (Mondello). According to Tom Shales in the Washington Post, "What Perry Como did week after week on his TV shows was not so much sing to his fans as have a continuing conversation with them, a conversation in song."

In 1945, Como recorded a successful pop song "Til the End of Time." Como became the first artist to have ten records sell more than one million copies. His television show also received extremely high ratings. On March 14, 1958, the RIAA (Recording Industry Association of America) certified Como's single "Catch a Falling Star" as its first "Gold Record." A Gold Record means that an album has sold 500,000 copies. Como shared the Gold Record honor with other famous singers such as Elvis, who also received this success later in the year. Not only did he sell thousands of copies of this single, but he won the 1958 Grammy for it.

In 1950, Como went to CBS and spent five years hosting his own show. After his brief hiatus from NBC, he returned in 1955 to star in a weekly Perry Como Show (later known as The Kraft Music Hall ). During this period, Como won five Emmy Awards for excellence in television. His ABC-TV Christmas specials and his Christmas albums also became a part of popular culture at the time. The specials were finally canceled in 1987; the cancellation of the special was compared to Santa Claus being removed from the Christmas experience. Como, one of the most successful artists of the twentieth century, is probably best recognizable to modern youth by "Papa Loves Mambo." Some of his other most famous numbers were; "Dream Along with Me," "Don't Let the Stars Get in Your Eyes," "Temptation," "Because," "Prisoner of Love," "And I Love You So," and "It's Impossible." In 1973, he was nominated for a Grammy as best male pop vocalist for his song "And I Love You So."

By the 1980s Como was becoming dissatisfied with the change in the recording business. His recording sessions, which were previously filled with laughter, were turned into much more somber occasions. In the early 1980s Como finally walked away from his final studio-produced recording. However, in 1987 he returned to record another album, this one was to be his final mainstream album. His recording "Wind Beneath My Wings" was semi-autobiographical, it was a positive end to a long and successful career. In 1994 Como did record for his private Christmas Concert in Ireland (it was a concert for a television special).

Perry Como is truly a Pennsylvania success story. His long life of hard work, success, and happiness finally ended on May 12, 2001 in Jupiter, Florida. However, his memory is still alive in movies, songs, and in the NBC storage room, as well as at 1708 Vine Street, the location of his star on the Hollywood Walk of Fame. This Renaissance man, who was able to sing, read music, play the organ, and the baritone horn, is a man who the new generation can aspire to emulate, and the older generation can be proud to claim.