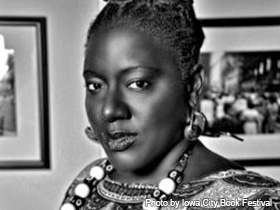 Tameka Cage Conley is an award-winning Pittsburgh writer of fiction and plays whose debut play Testimony has been produced multiple times.

Literary artist, Tameka Cage Conley writes fiction and plays, and has published over 20 poems including "People Die in Their Fifties, or Vanity," which appeared in a 2014 feature presented by the Southeast Review in response to the Ferguson protests. Her debut play, "Testimony," was written with the support of an August Wilson Center Fellowship in Literary Arts and was later produced at the Center in 2011, as well as performed in Los Angeles and by the Darlinghurst Theatre Company in Sydney, Australia. Conley is the recipient of many awards, including a Pittsburgh Foundation Eben Demarest Trust Fund Grant and a Truman Capote Fellowship in Fiction at the Iowa Writers' Workshop. She was selected as one of the four poets for the 2015 Public Poetry Project of the Pennsylvania Center for the Book. Conley has held teaching positions at Bucknell University and the University of Pittsburgh, among others, and co-lead (with Derek Nnuro) The Reclamation Workshop: A Cultural & Literary Intensive at the Englert Theatre in Iowa City in April 2018.

Native Louisianan, Tameka Cage Conley, was born on April 23, 1977, in Shreveport. She earned a BA from Dillard University in 1999, and went on to earn her PhD in English from Louisiana State University in 2006, where she received the Huel Perkins Doctoral Fellowship and the Lewis Simpson Distinguished Dissertation Award.

Conley began her literary career as a poet and has published over 20 poems, including "People Die in Their Fifties, or Vanity," which appeared in a 2014 feature presented by the Southeast Review in response to the Ferguson protests. "When I'm in a rhythm," she tells Pohla Smith of the Pittsburgh Post-Gazette, "I write anywhere from three to five hours a day. When I'm not, I'm always thinking of writing, so when I get to my computer, I know exactly what to do."

Conley's poem "Losing," from Fledgling Rag Issue 11, was selected for publication by the Public Poetry Project of the Pennsylvania Center for the Book in 2015.

She also writes fiction and plays, and has held teaching positions at Bucknell University, Duquesne University, the University of Pittsburgh, the Community College of Allegheny County, and Chatham University. For a time, she worked for The Neighborhood Academy, a college prep school for low-income students in the East End of Pittsburgh, Pennsylvania, and serves often as a facilitator of community youth workshops.

"I thought Pittsburgh would be a good place to get a university job because of the number of colleges and universities here, she tells Smith. "I don't think any other city could have fostered my growth as an artist in quite the way Pittsburgh has. ... I've found a great deal of generosity here, particularly from the arts community. There are so many great young artists here, and I sense there is a neo-renaissance for artists of color, which is exciting to be a part of."

In 2010, Conley was awarded the August Wilson Center Fellowship in Literary Arts, where her first play, "Testimony," was later produced in 2011. According to the August Wilson Education Project web site, the play has also been performed in Los Angeles and at the Darlinghurst Theatre Company in Sydney, Australia. An excerpt of the play appeared in the anthology 24 Gun Control Plays.

"When I wrote [Testimony]," Conley writes in an essay for Theatre Communications Group (TCG) Artistic Innovation Salon. "I hoped to spark conversations about violence in urban communities around the United States, including Pittsburgh, where I reside, about Black men dying at the hands of each other, at the hands of cops, or being carried off to jail while still in adolescence. [T]o get people invested, I felt I had to give them something tangible and visual, to stir and revive, to make people care about what they had forgotten, no longer (or never) cared about—the legacy of Black male death in these United States. ... I was certain, then...that if a life in the audience of the August Wilson Center for African American Culture...was impacted, if one young man of color (or any person, frankly), heard, felt, or saw something on the stage that compelled him or her to think, 'What I am witnessing is part of me,' or 'I know this story, because it is mine,' I had succeeded."

Writing fellowships awarded to Conley include those from Cave Canem (2012), the Vermont Studio Center, the Virginia Center for the Creative Arts, and the Squaw Valley Writers Conference and Workshops. The Pittsburgh Foundation awarded Conley a $12,435 grant from the Eben Demarest Trust Fund in November of 2013. Each year, the fund supports the creative and intellectual independence of an artist or archaeologist, according to the Pittsburgh Foundation web site, and Conley is using it to write her first novel.

"How can we, as artists, make new that which has already been made...?" Conley poses in her essay. "... If we waited for the absolute new, we would be waiting forever. ... I expect to write nothing new, but I do expect to be unique, to floss a fresh voice, to be proverbially 'nice with mine,' to let the words that ring out speak not in one tongue only, but many, to be sacred. And I want to join with other voices, too. And, therein, be joined."

Conley earned her MFA in Fiction from the Iowa Writers' Workshop in 2018, and was a recipient of both a Truman Capote Fellowship and Graduate Fellowship during her studies.

At the time of this writing, Tameka Cage Conley's novel-in-progress, "This Far, By Grace," follows the stories of over six generations of an African American family, and an excerpt has been published in issue three of Huizache: The Magazine of Latino Literature.

"As artists," she says. "[W]e hope our audiences will laugh, weep, shiver, think differently, think more critically, be overwhelmed and be grabbed, be moved and moved again by our work...the way I feel when I walk away from an August Wilson play...that feeling that something in my spirit has transcended..."