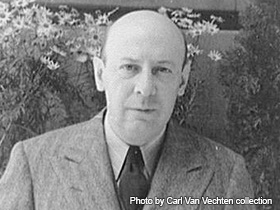 McKeesport's Marc Connelly won the 1930 Pulitzer Prize in Drama for The Green Pastures.

Marc Connelly was born in 1890 in McKeesport, Pennsylvania. Connelly attended Trinity Hall, in Washington, Pennsylvania, from 1902 to 1907. Connelly was a journalist in Pittsburgh early in his career and went on to be a playwright who is most famous for his Pulitzer Prize winning play The Green Pastures in 1930. Late in his career he wrote memoirs and novels. Connelly died in 1980 in New York, New York.

Marc Connelly was born on December 13, 1890, in McKeesport, Pennsylvania. Connelly was the son of Patrick Joseph, an actor and hotel owner, and Mabel Louise, an actress. Connelly attended Trinity Hall, in Washington, PA, from 1902 to 1907. Connelly also taught drama courses at Yale University later in his life. Early in his career, however, Connelly spent several years working as a journalist in Pittsburgh. Marc Connelly then moved to New York and became a New York theatre critic. Connelly was shortly married from 1930 to 1935 to silent film actress Madeline Hurlock, but they divorced five years later.

Connelly's career as a playwright quickly followed as he collaborated with George S. Kaufman. Their work included such Broadway hits as Dulcy in 1921, To the Ladies in 1922, Merton of the Movies in 1922, and Beggar on Horseback in 1924. All of these plays were later made into films. Connelly is best known for his Pulitzer Prize winning play The Green Pastures (1930). This play was a based on Roark Bradford's book Ol' Man Adam an' His Chillun from 1928. The play was a fantasy of biblical history presented in terms of the religious life of Southern African Americans. The play has two parts: the first part is from the Creation to the Flood, and the second is from the story of Moses to the Crucifixion. The play has a series of biblical stories that are told from an African American perspective. The theme throughout the play is that man eternally sins and is either punished or renounced by God. The play had seventy-one performances at the 44th Street Theatre in New York, New York. Later, Warner Brothers asked Connelly to direct the 1936 film version of this play, although he played little part in the production. Although the play had initial success, the play's revival 15 years later closed quickly. Even by current standards of criticism, what distinguishes the play is its scope, and it holds a position as one of the important plays in American drama.

From this success, Connelly moved onto the next stage of his life as an actor. In the late 1950s Connelly made his on-camera debut in Tall Story. Connelly was nominated for a Tony Award in 1959 for Best Featured Actor in a play. Connelly lost to Jason Robards Jr. for his role in The Disenchanted.

Connelly wrote his memoirs in 1965. That same year he also published his first novel, A Souvenir from Quam, which mocked spy stories. Connelly will always be remembered for his Pulitzer Prize-winning play The Green Pastures in 1930.