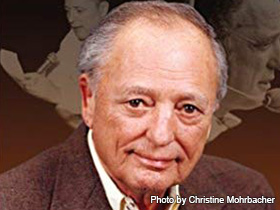 Born in Pittsburgh on January 23, 1929, Myron Cope is one of the best-known voices of sportscasting on both radio and television. Most famous for his sports commentary on the Pittsburgh Steelers, he is also an acclaimed sportswriter. His book, Myron Cope: Double Yoi! (2002), is a memoir that goes behind the scenes of his legendary career. Cope announced Steelers' games from 1970 until 2005. He passed away in 2008 in Mount Lebanon.

Myron Cope, originally Myron Kopelman, was born on January 23, 1929, in Pittsburgh, Pennsylvania, to Ellis and Elizabeth Kopelman. He attended the University of Pittsburgh, where he graduated with a BAin Arts and Sciences in 1951. He married Mildred Lindberg on December 28, 1964, with whom he had three children: Martha (who died shortly after birth), Daniel, and Elizabeth. Daniel was born with severe autism and was sent to live in a special home where he could receive the care he needed. Mildred died on September 20, 1994, after a long battle with cancer.

Cope began his sports-writing career in 1951, right before his graduation from college. He was hired at the Pittsburgh Post-Gazette as a "stringer," or part-time correspondent, on the college scene. Looking for a more substantial position in a newsroom, Cope left for Erie, Pennsylvania and joined the Erie Times. While he was there he tried his hand at magazine writing for the first time and had a short story published in Sir Magazine. Less than a year after he joined the Erie Times, Cope received a telegram from the Pittsburgh Post-Gazette informing him of an opening for a general assignment reporter. He packed his bags that night and was back in Pittsburgh in a matter of hours for his first day on the job.

At the Post-Gazette, Cope was told by his manager that it would be wise to change his last name because it sounded "too Jewish," as there was fear of an anti-Semitic response from readers. His byline became Myron Cope, instead of Myron Kopelman, from that day forward.

Throughout the 1960s, Cope contributed regularly to various magazines as a freelance sportswriter, including The Saturday Evening Post and Sports Illustrated. He interviewed many prominent sports figures, including Muhammad Ali, Roberto Clemente, and Howard Cosell. In 1962 he received the E.P. Dutton Prize for outstanding sports magazine writing. In 1964 he published his first book, co-written by Jim Brown, called Off My Chest. In this book, Brown voiced his opinions on the social injustices experienced by African Americans in the sports world, which created a stir among athletes and the general public.

In 1968, Cope's career changed from sportswriter to broadcaster—a move that would turn him into a Pittsburgh legend. One February morning of that year, he received a call from the director of the local radio station, WTAE. He was asked if he would be interested in broadcasting a brief sports show during the early morning commute times spanning four or five minutes. Cope was skeptical at first but decided to try the move from writer to broadcaster. Because of his loud and harsh voice, listener feedback was not positive during the first few months of his radio show. But as the show continued to run every morning and things began to change, his audience not only warmed to his style but grew in size. Listeners recognized that he was an authority on sports, and they began to listen more to what he had to say than to his voice itself. Cope did not give up his love for writing, though, and in 1968 he published his second book, Broken Cigars.

It wasn't long before Cope was offered the job of color analyst for the Pittsburgh Steelers on WTAE-TV in 1970. His commentaries were known for their honesty, insight, and wit; his popularity grew. In 1971, the American Federation of Television and Radio Artists gave him the award for outstanding sportscaster in Pittsburgh. In 1973, he began hosting his own radio talk show, in which listeners got to know Cope and his personality a little better. Words and expressions he'd use in his broadcasts—like "Yoi," an expression of disbelief or astonishment, and "okel-dokel"—became popular terms used by Steelers fans and Pittsburgh citizens alike. His third book, The Game That Was: The Early Days of Pro Football, was first published in 1970, and was revised in 1974 for a second edition. In 1975, Cope made one of his greatest contributions to sports broadcasting when he invented the Pittsburgh Steelers' Terrible Towel—their famed good-luck symbol. Over the radio and television he implored his audiences to embrace the new gimmick, which became extremely popular and is recognized today throughout the world.

Cope continued broadcasting for the Steelers until 2005. He also filmed commercials and worked for his favorite charities, including the Pittsburgh Autism Society and the Allegheny Valley School (where his son Daniel lives). In 2002, he published his autobiography, Myron Cope: Double Yoi!, a touching and often humorous memoir about his beginnings in sports, his career, and his life.

Myron Cope died of respiratory failure on February 27, 2008, at a Mount Lebanon nursing home. Gene Collier of the Pittsburgh Post-Gazette wrote at his passing: "Myron Cope was the much-decorated master of the written word, the ever-celebrated sand-blaster of the spoken word, and a pre-eminent Pittsburgh symbol not only of our selves but also of our hopes and our innate joyfulness."