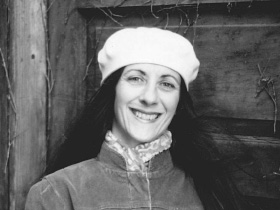 Paola Corso was born in the Pittsburgh area where her Italian immigrant family found work in the steel mill. A New York Foundation for the Arts Poetry fellow and Sherwood Anderson Fiction Award winner, she is the author of Catina's Haircut: A Novel in Stories on Library Journal's notable list of first novels in Fall 2010; Giovanna's 86 Circles And Other Stories (2005), a John Gardner Fiction Book Award Finalist; and books of poems: Death by Renaissance (2004); Once I Was Told the Air Was Not for Breathing (2012); and The Laundress Catches Her Breath (2012), winner of the Tillie Olsen Award for Creative Writing from the Working Class Studies Association. At the time of this writing, she lives in Pittsburgh after living in New York City for nearly 20 years and is a Lecturer in Chatham University's MFA Program in Creative Writing. She is married to Michael Winks, and together they have two sons, Giona and Mario.

Paola (PJ) Corso was born in the Alle-Kiski Valley of Allegheny County, Pennsylvania and grew up in Harrison Township and the river town of Tarentum. She is the daughter of Vincenza Marie Calderone and Mario Procopio Corso. Corso attended Highlands High School in Natrona Heights and matriculated at Indiana University of Pennsylvania. She is a graduate of Boston College, San Francisco State University and the City College of New York. Corso is married to Michael Winks; the couple has two sons, Giona and Mario.

Corso's Italian-American heritage has been a powerful force in her writing. Among her most important literary influences were Italian authors such as Grazie Deledda, Carlo Levi, and Italo Calvino. She first published in VIA: Voices in Italian America and Italian Americana. Corso was also the first runner-up for the Bordighera Poetry Prize for 2003's "Oxygen for Two" and 2004's "The Laundress Catches Her Breath." The Bordighera Prize honors Italian-American poets and has their work translated into modern Italian. Her early novel manuscript, San Procopio, won her the DeJur Award in Creative Writing. She also won the 2000 Sherwood Anderson Fiction Award and a New York Foundation for the Arts poetry fellowship.

Her upbringing in Tarentum along the Allegheny River in an Italian-American family was also a driving force and inspiration behind her writing. Much like William Carlos Williams did with his hometown of Paterson, Corso has created fictional versions of Pittsburgh, one poem and short story at a time. As Ann Curran's review of her second volume of poems, Death by Renaissance (2004), in the Pittsburgh Post-Gazette states, "you can take the poet out of Tarentum or any of 'the Pittsburgh river towns,' but you can't take the town out of the poet." Corso told Italian Americana that she "write[s] as one who left for those who stayed." In one of the poems in this volume, "The Same Fish Twice," Corso seeks to "navigate the course of development and its consequences in Pittsburgh river towns."

In 2005, she published her first volume of short stories: Giovanna's 86 Circles and Other Stories. The stories in this volume use magical realism, an unconventional mode of storytelling that has been associated with Latin American authors like one of her major influences Gabriel Garcia Marquez (One Hundred Years of Solitude). Corso told Tamara Kaye Sellman in an interview for MARGIN that magical realism is her effort to "capture the magic of the river's flow in my stories, which are primarily set in a working-class world on the decline that in many ways is like a box of restriction—the work uniform, the time clock, the assembly line, the pay-cuts, the layoffs, foreclosures. It's a far-fetched idea that you can control what you have no control of, somehow free yourself from what's pinning you down, even for a brief moment in a daydream or a little folktale." In an interview with Pittsburgh Magazine she likens the magical stories she tells to the tall-tale tradition, "something that working-class folks can pass down."

The volume contains ten stories, including the title story that focuses on the generative powers of an old woman's tears and a young girl's kiss. Sellman praises the collection in MARGIN, saying that it "couldn't be a finer display of urban American magical realism, exploring the twists and turns of sooty river country in the heart of the American Rust Belt." Giovanna's 86 Circles was: named one of the Best Short Stories in The Montserrat Review, on the Pennsylvania School Librarian Association's Top 40 Young Adult Fiction List, a John Gardner Fiction Book Award Finalist, and a Sons of Italy National Book Club Selection.

In 2010, Corso's first novel, Catina's Haircut: A Novel in Stories, was published. The novel captures the lives of four generations of a peasant family who are faced with horrific poverty, both in Italy and in an immigrant's United States. According to the Corso's website, the novel incorporates magical realism and oral tradition that help the characters' generational tale of "resistance andtransformation." It made the Library Journal's "First Novels, Fall Firsts" notable list and was a Sons of Italy Book Club Selection.

Penn State's own Associate Professor of English and Women's Studies and author, Julia Kasdorf, says of the collection: "This is a song of lament for all labor and the earth made outrageous with a magical imagination. It is a crazy, gorgeously-crafted romance of the American worker. And just the thing for these evil times. Good job, Paola Corso!

Corso tells Nin Andrews of CavanKerry Press that her fascination with her grandmother's ritual, and then her mother's and cousin's ritual, of hanging clothes on the line was the origin of the laundress in her book. "I wrote a poem about my cousin and had no idea that her voice would take such a hold on me through a full-length collection."

Her poetry book Once I Was Told the Air Was Not for Breathing, also published in 2012, is split into two sections that explore the realms of male steel workers in Pittsburgh and female garment workers in New York City.

In discussing her gravitation towards short stories and poems vs. 300-paged novels, Corso says of her recent writing, "It's as fractured as I am splitting myself as mother, teacher, writer. My latest work in progress, Bad Mothering, crosses genres. It's part novel in various forms and lengths of prose, but also in poems and drama."

Her unpublished poetry collection, Oxygen for Two, won first-runner up for the Bordighera Poetry Prize. Corso's other work has been featured in several anthologies, and she has also published articles and columns. She is co-editor, along with Dr. Nandita Ghosh, of the International Feminist Journal of Politics special issue, "Politics of Water: A Confluence of Women's Voices," published by Routledge Press (2007).

Corso has taught writing in the community with the National Endowment for the Arts, WritersCorps administered by the Bronx Council on the Arts, the National Writers Union New York Local, and at the university level as a writer-in-residence in Western Connecticut State University's Low-Residency MFA Program in Creative and Professional Writing. At the time of this writing, she continues to actively articipate in workshops and panels and to travel the country giving readings of her work.

After living in Brooklyn for nearly 20 years, Corso returned to her native Pittsburgh with her two sons and, at this time, continues to be a Lecturer in Chatham University's MFA Program in Creative Writing.