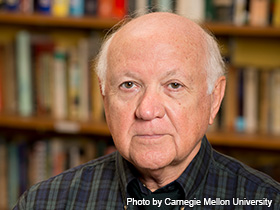 Prize-winning poet and Carnegie Mellon professor Gerald Costanzo is among the 2013 poets selected for the Public Poetry Project of the Pennsylvania Center for the Book.

Gerald Costanzo was born in 1945 in Portland, Oregon, to parents James and Verna. He has one brother, named Douglas. Costanzo attended Harvard University as well as Johns Hopkins University. In 1970, he moved to Pittsburgh to begin his teaching career.

Costanzo has been writing since the early 70s; his first work, Badlands: First Poems, was published in 1973 by Copper Canyon Press. Since, he has since published other collections of poetry and edited anthologies. Two anthologies, which he co-edited, include Three Rivers, Ten Years: An Anthology of Poems from Three Rivers Poetry Journal and American Poetry: The Next Generation. His first poetry collection, In the Aviary, won the Devins Award, and he has been honored with other awards for his writing and editing from the Coordinating Council of Literary Magazines, The Falk Foundation, and the Pennsylvania Council on the Arts. He also received two National Endowment for the Arts (NEA) Creative Writing Fellowships, as well as two Pushcart Prizes for his poetry.

In 1972, Costanzo founded the Carnegie Mellon University Press (then called Three Rivers Press), which publishes books in the fields of contemporary poetry, short fiction, memoir, history, art history, education, and business. The Press continues to publish award-winning books; perhaps one of the most notable is Rita Dove's, Thomas and Beulah, which received The Pulitzer Prize for Poetry in 1987.

His poem "Braille," from Nobody Lives on Arthur Godfrey Boulevard (BOA Editions, 1992), was selected for publication by the Public Poetry Project of the Pennsylvania Center for the Book in 2013.

At the time of this writing, Gerald Costanzo teaches writing and poetry courses at Carnegie Mellon University and continues to serve as the Director of the University Press. He has lived in the Pittsburgh area for over forty years and currently resides in Mt. Lebanon, Pennsylvania.