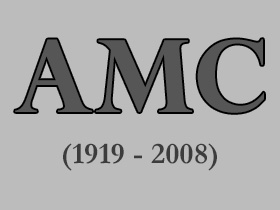 Composer Alexander Courage is best known for composing the theme for Star Trek.

Alexander Courage was born on December 10, 1919, in Philadelphia, Pennsylvania. He began his career composing radio shows for CBS, and this eventually led to his success at MGM studios writing and orchestrating some of America's greatest classical musicals. Courage is probably best known for composing the opening theme for Star Trek: The Original Series. In his later years, Courage was noted for his orchestration of famous films such as Fiddler on the Roof, The Poseidon Adventure, Hook and Jurassic Park. Courage died May 15, 2008, at the "Sunrise" assisted-living facility in Pacific Palisades, California.

Alexander Courage was born on December 10, 1919, in Philadelphia, Pennsylvania. Growing up, Courage had only one sibling, George, who died at the age of seven. His father, Alexander Courage, traveled to the United States from Scotland during World War I and produced tools for the French army. This is where his parents met and were later married.

As a child, Courage developed an immediate connection toward his musical abilities. According to his mother, when Courage was four, he discovered the piano during one of her mandolin gatherings. As his mother played music, he would sit by the piano and try to play the tunes.

At the age of eight, Courage went to his uncle's camp near Chester Springs and started playing the bugle. This inspired his parents to buy him his first cornet, which in turn, introduced him to the world of music. By the time Courage reached high school, he developed an interest in the French horn and held the position of first chair for the New Jersey State Symphony Orchestra. After flunking twice as a composition major, Courage finally graduated from the Eastman School of Music in 1941. During his college studies, he also became interested in conducting and enrolled in several classes under the instruction of Paul White, an American composer.

After graduating, Courage enlisted in the army and served as an Air Force bandleader at various California bases during World War II. After his discharge, he began composing and conducting for CBS Radio for shows such as Hedda Hopper's Screen Guild Theater, This is Hollywood, and The Adventures of Sam Spade, Detective.

In 1948, Courage began working for MGM, where he arranged and orchestrated many of America's classic musicals. In the musical, The Band Wagon (1953), Courage composed "I Guess I'll Have to Change My Plan." Courage also orchestrated several songs in Seven Brides for Seven Brothers (1954) and also in It's Always Fair Weather (1955). Some of his other work at MGM can be heard in musicals such as Show Boat (1951), Guys and Dolls (1955), Gigi (1951), and others. During this time, Courage also worked with Paramount on their production of Funny Face (1957). It was here that Courage composed one of his favorite and most memorable pieces of his career: a bullfighter themed pas de deux for Fred Astaire, an Academy Award-winning film and stage dancer. In the late 1950s, Courage scored a handful of films such as Arthur Penn's The Left Handed Gun and Andre de Toth's Day of the Outlaw; however, his primary focus for composition became television.

In the early 1960s, Courage became involved with writing some of the first original music to be heard on television shows. Courage wrote the music for various episodes of M Squad, Wagon Train, and The Alfred Hitchcock Hour at Universal Studios, and National Velvet at MGM.

In the mid 1960s, Lionel Newman, musical director for 20th Century Fox, invited Courage to join his studio. Courage was assigned to write music for The Pleasure Seekers, Voyage to the Bottom of the Sea, Daniel Boone, Lost in Space, and other series. During an interview, Courage was asked about his overall feelings toward scoring television series. In response, Courage said, "I never had time to take it seriously." Between the scoring of musical films to his weekly orchestrations, Courage found little time to focus on his television scores.

In 1965, writer and producer Gene Roddenberry asked Courage to write a theme for a television series about a star ship and its crew. Not having any interest in science fiction, Courage sat down and composed a theme that he later referred to as "marvelous malarkey." Little did Courage know, the "marvelous malarkey" that he rushed to complete would become one of the most recognized themes in all of television. Courage's theme for Star Trek took on a life of its own. According to Jon Burlingame, writer for the Film Music Society, "Courage's eight-note brass signature for the Enterprise may be the single best known fanfare in the world."

As the show continued to air, Courage only composed four other additional episodes of Star Trek. One of the reasons Courage decided to leave was partly due to tension that built up between himself and Roddenberry. In the attempt to gain extra compensation, Roddenberry wrote lyrics to the Star Trek theme without Courage's knowledge and also without any intentions of having them performed. This allowed Roddenberry to wrangle fifty percent of the royalties every time the theme was played. Completely disgusted with Roddenberry's greed, Courage immediately left the series.

While still working at Fox, Courage continued composing the music for hundreds of episodes of different shows including Lost in Space, The Waltons, and Eight Is Enough. The only other theme song he composed in his career was Judd for the Defense, which aired on ABC in the late 1960s. In the meantime, Courage and Newman received an Academy Award nomination for their work on Doctor Dolittle (1967). Courage also did orchestrations for other musicals in the 1960s, such as My Fair Lady (1964) and Hello, Dolly (1969).

During the 1970s, Courage continued composing for The Waltons, and by 1981, he had written music for more than 100 episodes. Courage also received two more Emmy nominations for his work in Medical Center in 1973 and another for ABC's Liberty Weekend as an arranger. In Luciano Pavarotti's 1981 film, Yes, Giorgio, Courage can be seen onscreen as a musical conductor. As Courage's work on the television set continued to dwindle, he began orchestrating for famous composers like John Williams and Jerry Goldsmith. For Williams, Courage orchestrated Fiddler on the Roof, The Poseidon Adventure, Hook, and Jurassic Park. Courage also orchestrated work in Superman IV: The Quest for Peace, and wrote several arrangements for the Boston Pops from 1980 to 1993. Some of the films Courage orchestrated for Goldsmith include Basic Instinct, First Knight, The Mummy, Air Force One, Mulan, and, ironically, Star Trek: First Contact and Star Trek: Insurrection. In 1988, he shared an Emmy Award for his work on the Julie Andrews...The Sound of Christmas television special.

During his early life, Courage married twice, each time ending in divorce. His third wife, Shirley Pumpelly Courage, whom he married in 1980, died in 2005. Courage had four stepchildren.

Alexander Courage died May 15, 2008, at the Sunrise assisted-living facility in Pacific Palisades, California. Courage died at the age of 88, and had been in declining health since 2005. After his death, composer John Williams commented:

He made a very big contribution to the musical life of Hollywood from the end of the second World War to recent years. He was known to most musicians in the community as having been one of the architects of what we used to refer to as the MGM sound, which meant that most of the musical films from MGM had a particular style of orchestration, which was an extension and development of what was done in the theater in the 1920s. They actually took that to a very high art form...