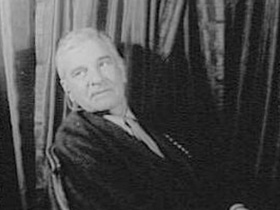 Malcolm Cowley, one of the most important literary historians of the 20th century, was born in Belsano in 1898.

Born in Belsano, Pennsylvania, and raised in Pittsburgh, Malcolm Cowley became the preeminent American literary critic and editor of his lifetime. His analysis and editing of William Faulkner's work established Faulkner as a great American writer and saved his work from obscurity. Cowley was himself an accomplished poet and essayist whose work was awarded the Harriet Monroe Memorial Prize for Poetry and the National Book Award.

Malcom Cowley was born in Belsano, Pennsylvania, to William and Josephine (Hutmacher) Cowley. In 1919, he married Marguerite Francis Baird, but the couple divorced in 1932, and in June of that year he married Muriel Maurer with whom he had one son, Robert William.

Cowley attended high school in Pittsburgh, where he developed a lifelong friendship with fellow writer Kenneth Burke. He joined the American Field Service in 1917, interrupting his studies at Harvard University, and served in France, driving munitions trucks and ambulances. He returned to Harvard in 1919, earning a BA the following year. His critical career began as a student, contributing literary reviews toThe New RepublicandThe Dial.Following his graduation, he and first wife Marguerite moved to France where Cowley was attracted to the intellectual world developing there following World War I. In Paris, Cowley became connected to writers of the "Lost Generation," including Ernest Hemingway, F. Scott Fitzgerald andGertrude Stein. He returned to the United States in the 1920s, and worked as a writer and translator for Sweet's Architectural Service in New York City between 1925 and 1929. For 11 years, starting in 1929, Cowley was the literary editor ofThe New Republic.Beginning in the mid-1940s, he became an editor at Viking Press where he worked until 1985.

In addition to his work as an editor and critic in literary journals, Cowley distinguished himself as a poet, publishing his first volume of poetry,Blue Juniata, in 1929, and a second collection of poems,The Dry Season, in 1941. He is probably best known for the editing ofThe Portable Faulkner (1946), a collection of William Faulkner's short stories and excerpts of longer works that lifted the author out of obscurity and established his reputation as a great writer. Faulkner later acknowledged Cowley's contribution to his career: "I owe Malcolm Cowley the kind of debt no man could ever repay."

Cowley received recognition for his work at every stage in his career. In 1939, he was awarded the Harriet Monroe Memorial Prize for verse printed inPoetry.He was given the National Book Award for Biography in 1980 forAnd I Worked at the Writer's Trade (1978), and the following year he won the National Institute of Arts and Letters Gold Medal.

Cowley passed away after suffering a heart attack on March 27, 1989, at New Milford Hospital, near his home in Sherman, Connecticut.