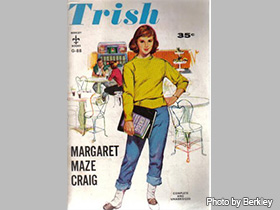 Born in 1911 in Ridgway, Pennsylvania, Margaret Maze Craig not only became a successful novelist, but she was also involved in several women's organizations. She was also recognized for her accomplishments as a teacher of Home Economics and was named one of the top ten Homemaking Teachers of the Year in Seventeen in 1962. Her books were published all over the world, such as in Japan, Germany, and Sweden. She died in 1964.

Margaret Maze Craig was born on January 16, 1911, in Ridgway, Pennsylvania. Her parents were Henry Riley and La Belle Sutton Maze. In 1937, she married Roy H. Craig, with whom she had two children.

Craig attended Indiana University of Pennsylvania (formerlyIndiana State College) and graduated with a BS in 1934. From 1934-1937, she worked as a Home Economist teacher for West Penn Power Company in Pittsburgh, Pennsylvania. Between 1950 and 1962, Craig worked as an author and published six books, including Trish (1951) and Three Who Met (1958), while at the same time working intermittently as a teacher in Oil City, Pennsylvania.

Craig was involved with many organizations such as the Belles Letter Club, the Young Women's Christian Association, the Parent-Teacher Association, and the Hospital Auxiliary, and she was the Treasurer for the National League of American Pen Women from 1952-1956. In 1962, Craig was named one of the top ten Homemaking Teachers of the Year in Seventeen. Her books were published all over the world, such as in Japan, Germany, and Sweden.