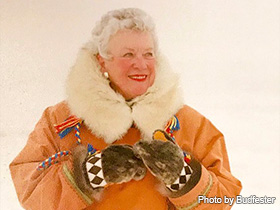 Born and raised as a naturalist, Jean Craighead George strives through her books and articles to educate both adults and children about the environment. She worked as a reporter and artist for many years and was married to John George from 1944 until 1963. My Side of the Mountain (1959) gained her recognition as an author, but Julie of the Wolves (1972) established her reputation as an insightful children's book author. George passed away in 2012 in Mount Kisco, New York.

Jean Craighead George was born on July 2, 1919, in Washington, DC, to Dr. Frank C. Craighead Sr. and Carolyn Johnson. Her interest in writing began at the age of eight while in third grade. The environmental subjects of her writing were the result of her personal experiences as a child. Her father, a chief entomologist for the Forest Insect Control Bureau, introduced her and her twin brothers, John and Frank, to the wonders ofnature. Studying under Pulitzer Prize-winning poet Theodore Roethke, George attained bachelor's degrees in both science and English from The Pennsylvania State University in 1941. As an undergraduate student, she served as editor-in-chief of Portfolio magazine and as secretary of the junior class.

Continuing her education, George went to Louisiana State University for graduate studies. But instead of completing her degree, she decided to pursue a writing career and moved back to Washington, DCto find work. She began her journalism career working as part of the White House Press Corps. George was a reporter for the International News Service (1942-1944), The Washington Post (1944-1946) and the Times-Herald. After marrying Dr. John L. George in 1944, she extended her career to include both art and writing. She worked as an artist and art director for Pageant magazine (1946-1947), as a staff writer and editor for Reader's Digest (1969-1982), and then began her path toward writing books. In collaboration with her husband, she wrote six children's books, illustrating all of them herself. Dipper of Copper Creek(1956) was her first real moment of recognition as a writer when she won the Aurianne Award for Literature. The Georges had three children—Carolyn, John,and Thomas—before getting divorced in 1963.

Throughout her life, George maintained her love for the environment and made it the center of her writings. George researched book subjects and traveled to possible book locations to inspire her writing of outdoor adventures. Her books often personify animals—such as butterflies, owls, foxes, deer, birds,and coyote—making learning about nature exciting for children. With her children, she has raised over 173 wild animals, many of which became characters in her books. She has written over seventy magazine articles for publications such as Better Homes and Gardens, National Wildlife and Audubon. She has also penned over one hundred books—mostly juvenile novels and children's books. Several of George's books have been critical as well as popular successes. My Side of the Mountain (1959), a Newbery Medal runner-up and American Library Association's Notable book, was made into a motion picture. Julie of the Wolves (1972)—her most famous work—earned her the Newbery Medal in 1973, was named as one of the ten Best American Children's Books in 200 years by the Children's Literature Association, and was a finalist for the National Book Award. Each of the two books has sold over eight million copies.

Reflecting on her divorce, her life as a single mother, and her writing career, George wrote her autobiography, Journey Inward, in 1982. She was a grandmother and resided in Chappaqua, New York, where she lived for over 47 years and continued to travel and write. Her last work, The Last Polar Bear, was released in 2009. Throughout her writing, George worked to help kids better understand the world in which they live, so that when they are adults they will take better care of it. George died in Mount Kisco, New York on May 15, 2012.