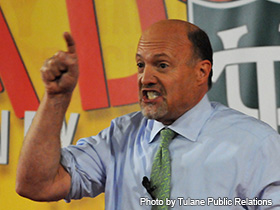 Jim Cramer was born on February 10, 1955, in Wyndmoor, Pennsylvania. He graduated from Harvard in 1977 as a journalist. He eventually went back to Harvard for a law degree which he completed in 1984. He decided that being a prosecutor was not his future and attended a summer program at Goldman Sachs. He became a broker there and eventually started his own hedge fund company and retired 14 years later in 2001. In 1996, he started TheStreet.com, and eventually got his own show on CNBC, Mad Money with Jim Cramer. Cramer is also the author of several financial books.

James (Jim) Cramer was born in Wyndmoor, Pennsylvania, on February 10, 1955. There he lived in a house at 1401 Cromwell Road, where every day he would come home and check how the stock market did the previous day. By sixth grade, if he had invested in the stocks that he picked, he would have made a couple of million dollars. He devised a strategy to pick stocks: pick active stocks and defensive stocks and try to make small gains from them. When entering middle school, however, he stopped his stock obsession because his father did so poorly playing the market, and Cramer kept his stock skills hidden until after college.

Jim Cramer got accepted to Harvard University on a scholarship. There the school's newspaper, The Harvard Crimson, took priority while his education was seen as secondary. He became editor-in-chief and spent many hours working. He graduated from Harvard College, the undergraduate program at Harvard University, in 1977 and became a journalist.

He became a general reporter for Tallahassee Democrat. While working for only a few months, he was the first reporter to cover the shooting spree by Ted Bundy because he was living a couple of blocks away from where it happened. He received great attention for his coverage of the story and got many job offers from crime reporting establishments, ultimately taking a job at the Los Angeles Herald Examiner writing obituaries. While out on a case, his apartment was robbed by a stalker, and he was left with his car and the things in it: a handgun, a hatchet, and a sport coat. He lived in his car for nine months and eventually got a job working for Governor Jerry Brown. From there he got a job at an up-and-coming magazine, American Lawyer, in New York City, where he stayed with his only sister, Nan. At that point he began to play the stock market as a hobby again and added another facet to his stock market philosophy: invest large on off-the-radar stocks. He then got accepted into Harvard law school to become a prosecutor. He earned his degree in 1984, but being a prosecutor did not fit his lifestyle. He started to invest his own money in the stock market and found his niche.

In 1984, Cramer applied to a multitude of banking houses in New York City and earned a summer program at Goldman Sachs. The day after he took his bar exam he started his summer program. He was very eager to learn as much as he could and found many diverse clients from Exxon to Reebok, which made Goldman Sachs a lot of money. The focus of the program was to get access to people's assets, not how they fared in the stock market. The number of new clients was the goal. He worked as a broker for Goldman Sachs for three years and left because he wanted to make the "big money."

Cramer left Goldman Sachs in 1987 to start his own hedge fund and he worked out of the offices of Steinhardt, Fire, and Berkowitz Company. His first clients were old classmates from Harvard. While working there, he met his future wife, Karen Backfish-Olufsen, who also was a trader, and a year later they were married.

He was highly motivated and was so interested in the stock market that he co-founded TheStreet.com, with Martin Peretz, who was one of Cramer's original "clients." Peretz contacted Cramer, who was working at American Lawyer at the time, and offered him money so that he could invest it, even though Cramer had no real experience with stocks. TheStreet.com was a website dedicated to stock quotes, investors' picks and predictions, and portfolios. Cramer left because of difficulty with business issues. In 2000, he was given an ultimatum by his wife to slow down or there would be trouble. So he turned over his hedge fund to then-partner Berkowitz in 2001 after 14 years. On average, he made $10 million a year while working there. Money is not all important because he said, "I made a small fortune. I made a lot of money and made a lot of other people wealthy."

Cramer did not slow down for long, because in 2002 he joined Lawrence Kudlow on Kudlow & Cramer on CNBC. The show was a combination of politics and business commentary. He did not feel at home and left the show in 2005. He got his own show Mad Money with Jim Cramer that same year, while Lawrence Kudlow got his own show, Kudlow & Company. In 2002, he wrote his first two books, Confessions of a Street Addict and You Got Screwed! Why Wall Street Tanked and How You Can Prosper. His first work was an autobiography chronicling his trials and tribulations from the stock market to his personal life. His second book was a guide to acquiring personal wealth in the stock market and by other economic means.

His show, Mad Money with Jim Cramer is an hourlong show on CNBC detailing his picks of stocks in the market. It is a high-energy, fast-paced show including viewer calls, interviews, and him throwing around his opinions while throwing down callers suggestions for good stocks. Nancy Franklin reports that Dan Rather called him "the Jerry Lewis of business-show hosts." He uses a plethora of sound effects, from bulls stampeding to gunshots, and answers viewers' calls with his catch phrase "Booyah." He even said, concerning his style, "I may play a total madman on TV, but I'm really just a very unbalanced guy at home. However, when it comes to stocks, I believe in being rigorous and methodical, not crazy. There's no madness to my method." He is criticized sometimes, though, on his stock picks and has come under fire from other analysts and investors. One of many criticisms of Cramer is that his opinion is like a weathervane, always changing with the trends. He even admits to this somewhat. Investors call into question his financial advice. Alice Gomstyn quoted Michael Zhuang, president of an investment firm, as saying that, "The Jim Cramer show is really making a lot of people trigger-happy."

In 2006, he authored two more books, Jim Cramer's Real Money: Sane Investing in an Insane World (2006) and Jim Cramer's Real Money: Watch TV, Get Rich (2006). In Sane Investing in an Insane World, he tells the secrets of becoming successful in the stock market and in Watch TV, Get Rich, he talks about how to use analysts' advice, including his own, to investors' advantage.

A the time of this writing, Jim Cramer continues his show on CNBC and has published additional books, including Jim Cramer's Stay Mad for Life: Get Rich, Stay Rich (Make Your Kids Even Richer) (2007) and Jim Cramer's Getting Back to Even (2009). His 2009 was a bumpy year; he was notoriously interviewed by Jon Stewart on live television and divorced his wife. Outside of the stock market he has starred as himself in Iron Man (2008) and as a newscaster in Wall Street: Money Never Sleeps (2010).