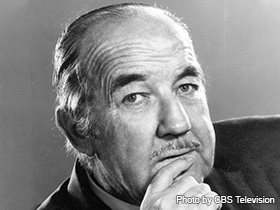 Broderick Crawford won the 1949 Best Actor Oscar for All the King's Men.

William Broderick Crawford was born on December 9, 1911, in Philadelphia, Pennsylvania. Crawford made his first popular appearance in the John Steinbeck's classic play Of Mice and Men (1937). Crawford served during World War II as a sergeant in the Air Corps. After he returned to Hollywood, he was featured in nine more movies from 1946 through 1949, including Night unto Night (1949) with Ronald Reagan. Crawford won the Academy Award in 1949 for his role in All the King's Men (1949).In 1962, Crawford married Kay Griffith and had two children; they later divorced in 1967. Crawford died on April 26, 1986, in Rancho Mirage after suffering a series of strokes.

William Broderick Crawford was born in Philadelphia, Pennsylvania, the son of Lester Robert Crawford, a vaudevillian, and Helen Broderick, a comedienne and musical performer. As a child he often accompanied his parents on vaudeville tours and occasionally played bit parts in short pants in their comedy skits. He attended the Dean Academy in Franklin, Massachusetts, and excelled in athletics, including football, baseball, and swimming. At his parents' insistence, he enrolled at Harvard University but withdrew after three weeks. He held a succession of jobs, as New York City waterfront stevedore, professional boxer, and able-bodied seaman aboard tankers. He returned to acting through radio and made his Broadway debut in 1934 in the play She Loves Me Not, portraying a football player in the work's London run.

Crawford's theatrical breakthrough came in 1937 when he landed a role in John Steinbeck's Of Mice and Men. Crawford read John Steinbeck's novella during a trip by railroad to New York. He appealed to George S. Kaufman, director of the projected Broadway adaptation of Steinbeck's classic, for the role of the half-witted, Lennie. Crawford rehearsed brilliantly and obtained the part. During this time, Crawford married his first wife Joan Taborin in 1940 and together they had one child. Their marriage ended in 1955. He later married Kay Griffith in 1962 and had two children with her. Their marriage also came to an end, in 1967.

As US involvement in World War II deepened, Crawford enlisted in 1942 in the US Army and served as a sergeant in the Air Corps. Overseas for eighteen months, he acted briefly as master of ceremonies with the Glenn Miller band in London and fought in France during the Battle of the Bulge. After he returned to Hollywood, he was featured in nine movies from 1946 through 1949, including Night unto Night (1949) with Ronald Reagan.

When Robert Rossen began casting for the film version of Robert Penn Warren's novel All the King's Men, he wanted Crawford for the leading role of Willie Stark. In a flash, Crawford became a box-office draw, his performance attracting raves from the critics and delighting audiences with its subtle, earthy, rough-hewn charm. His portrayal of the megalomaniacal political boss of a small state, based on the life and career of Louisiana governor and senator Huey Long, won Crawford the Oscar for Best Actor and the New York Critics Award as well, while the movie was accorded the Oscar for Best Picture. Bosley Crowther of the New York Times wrote of him, "Mr. Crawford concentrates tremendous energy into every delineation he plays, whether it is the enthusiasm of a callow bumpkin or the virulence of a drunken demagogue. Although it is hard to know precisely why he gravitates and acts the way he does, he draws a compelling portrait, in two dimensions, of an egomaniac."

Following his Best Actor award, Crawford signed a long-term contract with Columbia Pictures in 1949, which resulted in his starring in the comedy hit Born Yesterday, opposite Judy Holliday, as Harry Brock, the millionaire junk dealer (1950). Then in 1955 he gained unique fame as Captain Dan Matthews in Highway Patrol, the pioneering syndicated television police-drama series in 156 thirty-minute episodes (1955-1959). Unfortunately, that was to be his last major hit as a star.

In 1977, Crawford enjoyed his final outstanding American success with his portrayal of the Federal Bureau of Investigation director in The Private Files of J. Edgar Hoover. Crawford prepared for the role, read everything available about Hoover, studied film clips of the man, and learned to mimic his head gestures, clipped speech, and private smoking and drinking manners.

Crawford never had a high opinion either of movie-making or of his acting ability. He said that he relied on instinct to present his varied roles with as much sensitivity as possible. He was willing to appear before the camera for any purpose, even to advertise scouring pads on TV. He was quoted by Albin Krebs in his New York Times obituary as saying that "the take-the-money-and-run days never end. Oscar winner. Big deal. To pay the rent and keep your face up there, you do TV. Hell, if they're stupid enough to pay you for that junk, that's their problem." Crawford, who suffered a series of strokes beginning on New Year's Eve 1984, died in Rancho Mirage, California on April 26, 1986. He is honored with a star on the Hollywood Walk of Fame at 6736 Hollywood Boulevard.