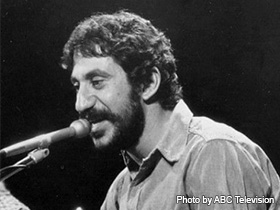 Despite dying tragically in a plane crash at age 30, Jim Croce's music has left a lasting impression on the American musical landscape.

Born in Philadelphia on January 10, 1943, Jim Croce was a singer/songwriter who was most famous for his albums Life and Times and You Don't Mess Around With Jim. The albums came out in the 1970s, and You Don't Mess Around With Jim was the only album of Croce's to reach number 1 on the Billboard charts. His first number one song, "Bad Bad Leroy Brown," came out just months before his death in a plane accident in Natchitoches, Louisiana, on September 20, 1973.

James Croce was born on January 10, 1943, in South Philadelphia, Pennsylvania. His parents were James and Flora Croce. He was drawn to music at an early age, learning his first song, "Lady of Spain," on the accordion at the age of five. Croce started his career out as a construction worker. After swinging the hammer for three years after high school he decided to attend Villanova University in 1964. He was in several bands, however none of them stuck together for more than several months. Croce and one of his bands were then sent to Africa on a foreign exchange program. Croce would go on to tour all parts of Africa and even went to the Middle East to play his songs. Once he graduated from Villanova with a degree in psychology, he went right back into construction for several months. He would go on to quit his construction job once again, and then decided to dedicate himself fully to music. He worked at a Philadelphia radio station and produced jingles for radio commercials. He also taught guitar to bring in some extra money in while he was writing jingles. Unsatisfied with what he was doing with his musical talents, Croce would join the US Army. Croce stayed in the Army for six months before he came back to the radio station where he would still write jingles for another six months. Fatigued from the jingle scene, he once again left the radio station. He would go on to provide "special education" to students with discipline problems in a local Philadelphia high school.

Croce started producing music in 1966 with his first album Facets. It was fairly under the radar, since it did not receive any major reviews. However, the first 500 copies sold fairly quickly to bar goers who saw his act. While working at this job in the high schools, he and his future wife, Ingrid, played music at local bars from 1969 to 1971. Croce released his second album with Ingrid and it was collectively known as Jim and Ingrid. The album was published and written by Croce. Over time though, Jim and Ingrid were getting frustrated by the bar tour scene. Ingrid would go on to sell fruit and Jim had to sell the guitars that he accumulated over the years to cover day to day expenses. His surplus guitars would eventually run out, so he went back to do what he usually did when running low on money, working construction. He had worked construction for another year while sending out copies of Jim and Ingrid to major record labels. Eventually ABC records gave Croce a record deal and he released the very successful You Don't Mess Around With Jim in 1972. This record spawned three of Croce's big hits, "You Don't Mess Around With Jim," "Operator (That's Not the Way It Feels)," and his biggest hit "Time in a Bottle." This album was Croce's largest seller, reaching number one on the Billboard charts. Although the album was a mere 30 minutes long over 12 tracks, it still sold very well. Croce had a very melodic sound to him; this was paired with his prolific writing prowess which is why this album had reached number one. Verses such as

If I could make days last forever,

I'd save every day like a treasure and then,

Again, I would spend them with you

had captivated the ears of many listeners back in the 1970s. Croce did not let the success of the record slow down his creative streak. He quickly followed up You Don't Mess Around With Jim with his other major album Life and Times in 1973. This album contained Croce's first number one hit, "Bad Bad Leroy Brown." The success of this song would give Croce enough material to start going on tour once again.

Unfortunately, the tour would never finish; just two months after "Bad, Bad Leroy Brown" topped the charts, Croce's plane crashed in Natchitoches, LA. Croce and the four other passengers (including band member Maury Muehleisen) were killed instantly on September 20, 1973. Several albums were released posthumously, most notably the greatest hits collection, Photographs and Memories, which became a best-seller. Several other compilations have since been issued, such as the 1992 release The 50th Anniversary Collection and the 2000 compilation Time in a Bottle: The Definitive Collection. There was also a documentary on Croce called The Legacy of Jim Croce, which was presented by American Public Television. His wife Ingrid has also opened up a restaurant called Croce's, where live music is played nightly in San Diego, California. He was also inducted to the Songwriters Hall of Fame in 1990.