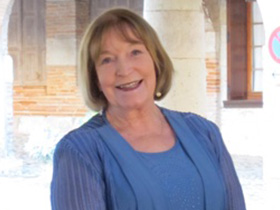 Barbara Crooker is a poet from Fogelsville, Pennsylvania, who has published several books, including Radiance (2004).

Barbara Crooker was born in Cold Spring, New York, in 1945, and currently resides in Fogelsville, Pennsylvania. She began writing poetry in the late 1970s. Her poetry, for which she has won many awards, incorporates themes of nature, home, family, love, loss, and disability. Over 700 of her poems have been published in anthologies and magazines, as well as compiled in several chapbooks and books, including The Lost Children (1989), Ordinary Life (2001), Radiance (2005), Line Dance (2008), and More (2010). Crooker continues to write, read her poetry, teach workshops, and speak about the venues available for publishing poetry.

Barbara Crooker, a poet from Fogelsville, Pennsylvania, was born Barbara Poti in 1945 in Cold Spring, New York. As a child, Crooker was an enthusiastic reader and enjoyed writing and illustrating stories in notebooks. In high school, she was the writer and editor for her school's newspaper. She received a bachelor's degree in English from Rutgers University in New Jersey and then went on to complete her post-graduate studies at Elmira College in New York. She began writing poetry in the 1970s following the stillbirth of her first daughter and a divorce from her husband.

Crooker was first inspired by poet Diane Wakoski. Crooker discovered Wakoski's poetry in The Eagle, a publication by Mansfield University (formerly Mansfield State College) in northern Pennsylvania. Crooker claims that Wakoski's poetry influenced much of her early work. At this time, Crooker wrote about family, birth, love, and loss, drawing on the hardship, joy, and bereavement she experienced as a mother. Her most widely reprinted poem, "The Lost Children," was the first poem she published. It was included in The Poetry Review, a journal for the Poetry Society of America. It appeared again in three anthologies on parenting, two online journals, six magazines, and several books on loss. Crooker believes this poem was so popular because it provided healing power for other parents who shared similar emotions and experiences.

Crooker then moved to Corning, New York, where she met and married her second and current husband, Richard Crooker. Stacey, her second daughter, was also born in Corning. Her children continued to inspire her poetry, but she began incorporating elements of home life, nature, and politics as well. She and her family eventually moved to Fogelsville, Pennsylvania, and by this time she and Richard had another daughter, Rebecca, and a son, David. Her children again became the main characters in her poems. These poems were later collected in Ordinary Life. Much of the poetry in this collection focuses on Crooker's son, David, who was diagnosed with autism when he was about two years old. The poems David inspired reflects on emotional issues involved with raising a disabled child and worrying about his future. Many of these poems have been reprinted in disability and parenting journals.

Although her main undertaking is poetry, Crooker has also written an article for Publishing Tip Quarterly, "Getting Poetry Published in Publications and Anthologies." She has worked for The Pedestal Magazine as a reviewer of Charles Fishman's collection of poetry, Country of Memory. And she has taught poetry workshops at the St. David's Unitus Conference at Geneva College in Beaver Falls, Pennsylvania, and elsewhere. Since 1990, Crooker has held over ten residencies at the Virginia Center for the Creative Arts. She has written more than 1,200 poems in her career, and over 700 of them have been published in magazines and journals, such as The Green Mountains Review, The Hollins Critic, The Christian Science Monitor, Smartish Pace, The Beloit Poetry Journal, Nimrod, The Denver Quarterly, The Tampa Review, Poetry International, The Christian Century, and America. They have also been reprinted in nearly a dozen anthologies, including The Bedford Introduction to Literature, Good Poems for Hard Times (Viking Penguin), Boomer Girls (University of Iowa Press), and Commonwealth: Contemporary Poets on Pennsylvania (Penn State University Press).

Over the years Crooker has become nationally recognized; Garrison Keillor has read seven of her poems on his National Public Radio (NPR) program The Writer's Almanac. Her work has been read on the British Broadcasting Corporation (BBC) and the Australian Broadcasting Company (ABC). Known internationally, Crooker's work has been translated into both German and Korean, and has appeared in several journals in England, Ireland, Italy, France, and New Zealand. She also read in the Poetry at Noon series at the Library of Congress and in Auvillar, France.

"Ordinary Life," the title poem from Crooker's 2001 collection, was selected for publication by the Public Poetry Project of the Pennsylvania Center for the Book in 2004.

In addition to being published in many magazines and journals, Crooker has published several books and chapbooks, which are self-published works or work published by a boutique printer. Her most popular works include: The Lost Children (1989), Obbligato (1992), In the Late Summer Garden (1998), Ordinary Life (2001), and Greatest Hits, 1980-2002 (2003). Ordinary Life won the ByLine Chapbook competition in 2001, and Impressionism won the Grayson Books Chapbook competition in 2004. Crooker also received the 2007 Pen and Brush Poetry Prize, the 2006 Ekphrastic Poetry Award from Rosebud, thirty-two nominations for the Pushcart Prize, five Best of the Net nominations, and she was a 1997 Grammy Awards Finalist for her part in the audio version of the popular anthology, Grow Old Along With Me—The Best is Yet to Be (Papier Mache Press).

Radiance (2005), her first full-length book, won the Word Press First Book competition in its publication year and the Paterson Poetry Prize in 2006. She tells Diane Lockward in an interview, "[The book] was organized like a quilt patch, with each section containing poems on the main themes: a child with autism, an aging parent's decline, the search for spiritual meaning in a secular age, love in a long-term relationship, ekphrasis (poems on paintings); all of these touching on some aspect of light."

Her second full-length collection, Line Dance (2008) won the Paterson Award for Literary Excellence. She says of her full-length collection, More (2010): "...I'm using a block construction, with all the poems on the same subjects (art, my mother's illness, family poems) grouped in the same section, each one dealing with a different definition or aspect or function of the word "more": the hunger for more, ("Everybody's got a hungry heart," Springsteen); the desire for more love ("There is no remedy but to love more," Thoreau); the need for more beauty, via art and culture ("It is the artist's duty to create a world that is more beautiful," Van Gogh); the reach for more of everything ("All I ever wanted was more," anonymous)."

Crooker has received the 2004 W.B. Yeats Society of New York Award, the 2003 Thomas Merton Poetry of the Sacred Award, the 2003 April Is the Cruelest Month Award from Poets & Writers, the 2000 New Millenium Writing's Y2K Competition, the 1997 Karamu Poetry Award, three Pennsylvania Council on the Arts Creative Writing Fellowships, and a prize from the National Education Association.

At the time of this writing, Barbara Crooker continues to write about love in long-term relationships, loss (dealing with both the death of her first child and a friend's losing battle with breast cancer), the hardships and accomplishments of disability (her son persevered through his autism and graduated from high school), the transience of time, and art. Crooker frequently reads her poetry and gives lectures to the public. She still resides in Fogelsville, Pennsylvania, in Lehigh County.