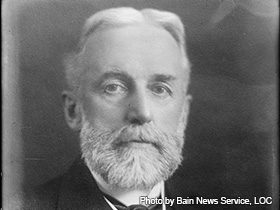 Cyrus Curtis founded the Ladies Home Journal and, with his wife, made it one of the most successful periodicals ever. He also published The Saturday Evening Post.

Cyrus Curtis was a well-accomplished magazine and newspaper publisher who was born in Portland, Maine, on June 18, 1850. Curtis started his career in magazine publishing at the age of 15, when he became founder of Young America. After moving to Boston and then Philadelphia, Curtis purchased the Saturday Evening Post in 1897 and founded the Curtis Publishing Company. Soon after the purchase of the Saturday Evening Post, Curtis and his wife, Louisa Knapp, founded the Ladies' Home Journal, which is still in circulation. Curtis then shifted his interests from magazine publishing to newspaper publishing; however, Curtis did not succeed in newspaper publishing and had to sell his newspapers after losing money. Cyrus Curtis died on June 7, 1933, at his home in Wyncote, Pennsylvania. He is survived by his daughter, Mary Louise Bok Zimbalist, who has founded the Curtis Center and Curtis Institute of Music in Philadelphia, all named in honor of Cyrus Curtis.

Cyrus Curtis was born Cyrus Hermann Kotzschmar Curtis on June 18, 1850, in Portland, Maine. Hermann Kotzschmar was a gifted musician and, for that, Curtis was named after him. Curtis was born to his father, Cyrus Libby Curtis, and his mother, Salome Ann Cummings. Curtis pursued a formal education until the end of ninth grade when he was forced to cease his education due to financial reasons. Because of financial struggles and the lack of a formal education, Curtis became a newsboy for the Courier and began to buy the papers and sell them for a little profit. This business did extremely well during the Civil War, when Curtis would sell these papers to soldiers around his town. Curtis continued to sell the Courier until he was offered a job at the Portland Press, followed by a position at the Portland Argus, a position Curtis accepted because for higher pay. Many sources close to Curtis wrote that he often stated that his early newsboy jobs are what got him into publishing. Then on April 5, 1865, at the age of 15, Curtis left his position at the Portland Argus to start his own newspaper called Young American. Not only did Curtis publish this newspaper, but he also wrote the whole newspaper.

Curtis continued to write, print, and publish the Young American in his Portland-based publishing plant until 1866, when a fire struck his plant and destroyed it. After the fire in Portland, Curtis was left to make a major decision: stay and rebuild or change locations and try again. Curtis decided to move to Boston three years later and built another publishing plant there to start the weekly business magazine, People's Ledger, in 1872. However, another fire destroyed the Boston plant in 1872, resulting in Curtis losing everything that he owned once again. Faced with the decision of staying in Boston or moving, Curtis decided to move to Philadelphia, Pennsylvania, in 1876.

The primary reason Curtis moved to Philadelphia was because he could save $1,500 in publishing costs there. While in Philadelphia, he was forced to take an advertising solicitor position for the Philadelphia Press to earn enough money to build another publishing plant. Then, in 1897, Curtis had earned and borrowed enough money to renew his love of publishing. At this time, Curtis created the Tribune and Farmer, which was seen by many people as the beginning of the Curtis Publishing Company. Curtis held the position of president of the Curtis Publishing Company from 1891 to 1922. Within the Tribune and Farmer, Curtis allowed his wife Louisa Knapp, whom he married in 1875, to write and edit a one-page article called "Women at Home." Surprisingly, this one-page article evolved into a full magazine, Ladies' Home Journal, which by the end of the century had close to a five million copy print run.

Cyrus Curtis died at his home in Wyncote, Pennsylvania, on June 7, 1933. At the time Curtis was survived by his daughter, Mary Louise Bok Zimbalist.

Zimbalist had been instrumental in carrying on her father's legacy until her death on January 4, 1970, in Philadelphia. Due to Curtis' love of music and nature, Zimbalist founded the Curtis Institute of Music and the Curtis Arboretum, both located in Philadelphia. Also in Philadelphia is the Curtis Center, which was originally the headquarters of the Curtis Publishing Company. Today the Curtis Center hosts many smaller shops and restaurants, a conference center, child care offices, and a health club, and continues to be one of the city's celebrated historical landmarks.