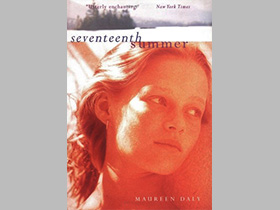 Interviewer and children's literature author Maureen Daly lived for a time in Philadelphia and often featured rural Pennsylvania in her work.

Journalist, columnist, and novelist Maureen Daly was born in Northern Ireland in 1921 and settled with her family in Wisconsin. Later she would matriculate at Rosary College in Illinois and publish her most famous work,Seventeenth Summer (1942). She spent much of her adult life in journalism and writing columns.She died in California in 2006.

Daly first attended St. Mary Springs Academy in Fond du Lac, Wisconsin before earning her BA in 1942 at Rosary College in River Forest, Illinois. Her passion for writing, however, developed long before entering college.At the age of 15, she enteredScholastic Magazine's short story contest and won third prize. The next year her teacher submitted her short story "Sixteen" to the competition; she won first prize. She would tellPublishers Weekly (quoted inContemporary Authors Online) that "When [she saw] checks from the reprint of 'Sixteen,' it's like seeing an old friend from 1938." When Daly was seventeen, she started writingSeventeenth Summer (1942), which she finally finished her senior year of college.It was the tale of two Wisconsin teenagers and their first romance. This book later became a bestseller, making her well known before her mid-twenties. It is the book credited with founding the "Young Adult Literature" category as a separate genre of writing. TheNew York Times'Margalit Fox would call it a "classic coming-of-age story."Seventeenth Summerhas never gone out of print.

In the midst of her new-found popularity, Daly sought a job in journalism, writing for theChicago Tribune.She became a weekly columnist, writing advice to teenagers. These columns were later compiled into a book,Smarter and Smoother (1944). After the publication of this book, Daly went on to write for several other publications, includingLadies' Home Journal. She also served as an editor at theLadies' Home Journalfrom 1944 to 1949. She won many awards such as the Freedoms Foundation Award and the Lewis Carroll Shelf Award. Through these awards and her works, she gained a reputation for her high-quality writing.

In 1949, after Daly became very interested in travel, she decided to move with her husband and daughter to Europe and become a freelance writer. Here, she reported many important topics and interviewed numerous famous individuals, including Eleanor Roosevelt and Harry Truman.She and her husband William McGivern would chronicle their travels in a memoir entitledMention Me in Mombasa (1958). After spending time in Europe, she decided to move back to America with her family.She settled in rural Pennsylvania before moving to California in 1958. During this time, she served as an editorial consultant at theSaturday Evening Postfrom 1960 to 1969. Daly was greatly influenced by the death of her daughter in 1983 and wrote another bestseller,Acts of Love (1986), which brought Daly back to the origin of her writing, young adult drama.

Maureen Daly passed away from non-Hodgkins lymphoma on September 25, 2006, in a hospice in Palm Desert, California. Richard Peck in theLos Angeles Timeswrote of her lasting legacy in young adult literature: "Maureen Daly is the spiritual grandmother of the young adult novel."