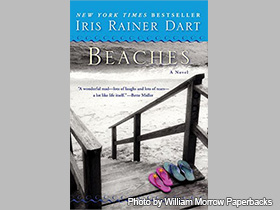 Pittsburgh native, Iris Rainer Dart is the author of Beaches (1985), later adapted into a popular film, and other novels focused on the entertainment business.

Iris Rainer Dart was raised in Pittsburgh, Pennsylvania. After attending Carnegie Mellon University, Dart moved to California where she began working in television, most notably the Sonny and Cher Show. Her novels often have a focus on the entertainment business, which reflects many of her life experiences. She became famous for her novel Beaches (1985), which was subsequently made into a popular film starring Bette Midler.

Novelist Iris Rainer Dart grew up in Pittsburgh, Pennsylvania. She was raised by her mother Rose, an immigrant from Russia, and her father Harry, from Lithuania. Her aspirations to work in the entertainment business started early. When she was five, she acted in the Pittsburgh Playhouse Theater. After graduating from Taylor Allderdice High School in 1962, she moved on to the Carnegie Institute of Technology (now Carnegie Mellon University) to pursue a BAin acting. While in her junior year, Dart collaborated with Stephen Schwartz, an Oscar-winning songwriter-to-be, on a play that she wrote for the Carnegie Mellon student-run Scotch 'n' Soda Theatre.

After graduating from Carnegie Mellon, Dart moved to California and began working in the television writing industry. By 1976, she had obtained the only female writing position on the Sonny and Cher Show. Dart's early career in the television industry certainly helped her in examining how the entertainment business worked, and also shaped some of her early novels. In 1980, she published her first novel, Boys in the Mailroom (1980), which examined the life of four men attempting to earn their spot in Hollywood by first working in the mailroom of a major studio. Bruce McCabe of the Boston Globe commented that the novel "may be Hollywood's most clich??d premise" in that the rise to fame seems to happen too easily. Dart, however, replied that the novel was written to honor her deceased ex-husband who worked in the mailroom before winning his success in the industry, and therefore was not far from reality.

In 1985, Dart produced her novel Beaches. The novel is a tale of a friendship between two very different women, the dramatic Broadway performer Cee Cee and the reserved lawyer Bertie. After describing their chance meeting when they were young, the novel (composed of both letters and narration) follows the maturation of the girls and their developing friendship. During an interview with HarperCollins, Dart recounted her connection to the character of Cee Cee. "I was a child actress, like Cee Cee, when I lived in Pittsburgh, Pennsylvania, growing up. I was and still am in love with the Broadway Theater." Due to its popular reception, Beaches earned a place on the New York Times Best Seller list in 1986. In a review of Beaches by Jan Rak of the Boston Globe, Rak admits that while it may not be considered a "classic," the novel details a "compelling" story, and the main character's "special friendship [is] a very touching one."

Following its commercial success, the novel Beaches was turned into a film in 1988. Starring Bette Midler as Cee Cee and Barbara Hershey as Hillary (the film's counterpart to the novel's Bertie), the film does differ slightly from the novel—Hillary suffers from heart disease rather than cancer, for instance. However, even though Dart did not write the screenplay herself, the main themes are still present and true to the original novel. The film also helped to heighten Dart's popularity, as Dart freely admits in an interview with Jewish Women International Magazine: "I guess you could say that it put me on the map."

Dart produced various other works that dealt with the entertainment business, including the sequel to Beaches in 1991, I'll Be There. Her 1999 novel, When I Fall in Love, follows in the same pattern. The novel's protagonist, Lily Benjamin, is a television comedy writer—similar to Dart's first job in Hollywood. She becomes torn between her feelings for her handsome, cardiologist fianc?? and her new boss whose body is misshapen by the tolls of cerebral palsy. Lily's son also must deal with his own recent paralysis after being shot. The novel's focus on physical disability connects to Dart's personal life—her husband's two brothers both suffer from Polio they contracted while in their 20s. The son of a close family friend was also born with cerebral palsy. However, the novel still retains the romantic standards one would expect from a Dart novel. In a review of When I Fall in Love, Kay Rohrer of the Lancaster Sunday News, said that her novel can "lift your spirits and make you sure love really can conquer all."

Whether the plot deals with some connection to the entertainment industry or a resemblance to a family member or friend, Dart uses encounters in her own life as the backbone of various stories. Her novel Some Kind of Miracle (2003) showcases a main character who is affected by schizophrenia. In an interview with the Pittsburgh Tribune Review, Dart reveals a connection to the disease: "When I was a kid growing up, a much older cousin was diagnosed with schizophrenia...My family were immigrants who brought lots of superstitions with them from the old country, so you can imagine the superstitions that existed around mental illness." By writing the novel, Dart hoped to "dispel some of the myths" surrounding this disease and make more of the general public conscious of the truth behind the illness.

Dart's writing reflects an easy-to-read style laced with drama. Candace Russell of the South Florida Sun-Sentinel, describes Dart's prose as a "conversational writing style" with a "proven formula." This formula generally involves the implications love has on the characters. While her novels are generally considered "beach reads," they still retain a large readership and fan base.

In 2007, Dart expanded her writing repertoire to include children's books. Along with co-author Joyce Brotman, Dart published the book Larry, the King of Rock and Roll (2007). The novel tells the tale of a dog who skyrockets to fame with his singing ability. However, he soon finds the ill-effects fame leaves on not only himself, but also his owners. In a review of the novel, Deborah Stevenson of the Bulletin of the Center for Children's Books pointed out that although there may be plot holes and weak emotional moments, "the concept is appealing and the reading is easy." Intended for ages nine and up, the 165 page novel teaches children about friendship and loyalty—lessons that also seem to appear throughout her other novels.

In 2009, Dart wroteLaughing Matters,a stage musical that was produced in California. In 2011, she wrote and producedThe People in the Picture, another musical that ran for two months.

At the time of this writing, Dart lives in Pebble Beach, California with her family.