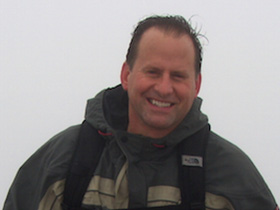 Todd Davis was born in 1965 in Elkhart, Indiana. He attended the Northern Illinois University and Grace College in Winona Lake, Indiana. After completing his education, Davis taught at Goshen College in Indiana, and later moved with family to Altoona, Pennsylvania, where began teaching creative writing, environmental studies, and American literature at the Pennsylvania State University’s Altoona campus. Davis has published multiple books of poetry, including Ripe (2002), Some Heaven (2007), In the Kingdom of the Ditch (2013), and Winterkill (2016), and has written and edited several scholarly works. In 2011, he was a featured poet in the Public Poetry Project.

Todd Davis was born in 1965 in Elkhart, Indiana. His father was a veterinarian and his mother an elementary school teacher and lay minister at a United Methodist Church. Davis' upbringing cultivated both a love of God and of poetry. From a young age, Davis was encouraged by his father to develop a shared appreciation for writing. In an e-mail interview with Goshen College, a private Mennonite liberal arts college in Indiana, Davis remembers his early introduction to poetry: "I grew up hearing Keats and Wordsworth and Longfellow and Frost recited at the breakfast table, at the dinner table, wherever we set foot into the woods together."

His mother's interest in poetry came from a religious perspective. "She would quote from the Psalms and the Gospels," he told Cameron Conaway, a poet who studied under Davis, "weaving the language of the King James Bible with the vernacular of the South—she was born and raised outside Lexington, Virginia. It was quite a stew of sounds." While in the seventh grade, Davis met Shelly, the woman he eventually married.

Davis attended Northern Illinois University in 1995, where he completed a Doctoral degree. Davis told Goshen College, "I didn't start writing poems until my junior year as an undergraduate. The true 'breakthrough' was the last semester of my master's degree. I took a course with the Zen Buddhist poet, Lucien Stryk." After completing his degree at Northern Illinois University, he and his wife moved back to Indiana, where he attended Grace College, an evangelical Christian college in Winona Lake. When Davis finished his education at the college, he taught there for six years. He and his family, including sons, Noah and Nathan, eventually moved to Altoona, Pennsylvania, where they currently live and where Davis teaches Creative Writing, Environmental Studies, and American Literature as a professor at the Pennsylvania State University’s (PSU’s) Altoona campus.

His first collection of poetry, Ripe, was published in 2002. Lucien Stryk, Davis' former professor, called the poems "as close to the earth as poetry can get." The calm pastoral scenes within the poem mark Davis' recurrent theme of appreciating nature. This theme also resonates in his poem "Illusion": "We've been burning prairie / grasses along the highway."

Many of Davis' poems deal with everyday sadness, such as "Accident," a poem he wrote after the father of his son's schoolmate committed suicide. His poems have appeared in many prestigious literary journals and magazines, including Arts & Letters, The North American Review, and West Branch, as well as the international newspaper The Christian Science Monitor. Davis is the winner of the Gwendolyn Brooks Poetry Prize and his work has been nominated for the Pushcart Prize. He said once in an interview with his United Methodist Church, "My life is about giving thanks to God for creation," which is evident in his poetry.

Davis' second book of poems, Some Heaven, was published in 2007, and received excellent reviews. This book features over one hundred poems that reflect the outdoors—Amish gardens, wildlife, farms, and woodlands. Poet Dan Gerber remarked that "Some Heaven is a book rich in compassion and tenderness. The poems, through which Todd Davis [details] the life and growth of his family, have a quietly penetrating power that can take the reader by surprise."

Alongside his creative work, Davis has written, edited, or co-edited several scholarly books, including Mapping the Ethical Turn: A Reader in Ethics, Culture, and Literary Theory (2001) and Kurt Vonnegut's Crusade: Or, How a Postmodern Harlequin Preached a New Kind of Humanism (2006). The former is a collection of fifteen essays that examines different aspects of ethical literary theory and introduces readers to premiere modern ethical critics. The latter delves into the philosophy and morals of Vonnegut's work. Davis explores how Vonnegut reinvents the norms of narrative in American culture and literature, and how they apply to daily life. The Spotlight on Teaching and Research (STAR) Series of PSU Altoona also featured his presentation, "Always Starting Over: How Does a Poet Teach Someone to Write a Poem?" (2013). STAR provides a platform for faculty members to share their insight on how research influences their teaching and vise-versa.

In 2010, Davis published his third book of poetry, The Least of These. In this collection, Davis employs Christian, Transcendental, and Asian traditions in his work. In these poems, Davis advises his readers that "the only corruption comes / in not loving this life enough." This collection was followed by In the Kingdom of the Ditch (2013), Winterkill (2016), and Native Species (2019). At the time of this writing, he also posts semi-frequent poetry recordings to his blog, “On the Allegheny Front.”

Todd Davis is the author of the chapbook, Household of Water, Moon, and Snow: The Thoreau Poems (2010), and co-editor of the anthology, Making Poems: 40 Poems with Commentary by the Poets (2010). His poems have been featured on the radio by Garrison Keillor on The Writer's Almanac and by Marion Roach on The Naturalist's Datebook, as well as by Ted Kooser in his syndicated newspaper column American Life in Poetry.

His poem, "Jacklighting," from Some Heaven (2007) was selected for publication by the Public Poetry Project in 2011.

...it's important to expose everyone—young and old—to poems because of the spiritual, emotional, and intellectual worlds it opens for them. Poetry needs to be read aloud. We need to taste the words in our mouths, feel them work their ways around our tongues, our throats. We need to hear the words, let them find their ways into the rhythms of our bodies, our lives.

Davis resides in Altoona, Pennsylvania with his family at the time of this writing. There, he teaches creative writing and environmental studies at the Pennsylvania State University, writes poetry, and exercises his faith.