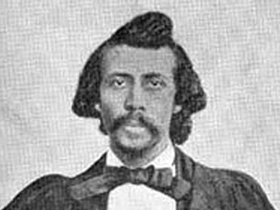 William Howard Day, an ordained Episcopal minister and editor of The Cleveland True Democrat and the Aliened American, lived and died in Harrisburg.

Born in New York City on October 16, 1825, William Howard Day was an editor, orator, and teacher best known for his historic role in Harrisburg as the first school director of color in the United States. He was the editor of several newspapers, including the Cleveland True Democrat, Aliened American, and Our Nation's Progress. Day also worked to mobilize black citizens in United States government activities, achieving great success in those efforts. He served on many influential government committees before passing away in Harrisburg on December 3, 1900.

William Howard Day was born on October 16, 1825, in New York City, the son of Eliza Day, an abolitionist and founding member of A.M.E. Zion Church, and John Day, a sail maker and veteran who fought in the War of 1812. When Day was still a young boy, John and Eliza put him in the custody of J.P. Williston, an ink manufacturer in Massachusetts. Williston, a white man, had offered to take over Day's guardianship in order to teach him printing skills on a more intensive level, as well as provide him with a liberal education his parents could not offer. Day graduated from Oberlin College in 1847—the only black graduate in a class of 50.

Day's first job, working as a printer and compositor to pay his way through college, quickly became a career when he became shop foreman after graduation. All of the employees whose work he oversaw were white men, but they accepted his authority.

Day was also considered a great orator. He addressed the Ohio state legislature in the hall of the House of Representatives, a privilege then reserved only for white men. Day became an editor of the Cleveland True Democrat newspaper in 1851; in 1852, he established the Aliened American, a publication for citizens of color. He was also a teacher of various subjects, including Latin, Greek, mathematics, logic, rhetoric, writing, shorthand, and vocal music.

In 1858, Day was elected president of the National Board of Commissioners of the Colored People by the black citizens of Canada and the United States. During his travels to the United Kingdom in 1859, Day served as preacher at a large congregational church in Lincolnshire, England, for four months and worked with the Young Men's Christian Association. While in England, he and several colleagues formed the African Aid Society.

The greatest accomplishments of Day's career began upon his return to the United States. He served as an editor for Zion's Standard and Weekly Review in 1866; he also wrote many poems for this publication. In 1867 he was recruited as Maryland and Delaware's inspector general of schools, where he supervised 140 schools, 150 teachers, and about 7,000 children. He then organized the black citizens of Wilmington, North Carolina, as voters in 1869—an effort that led to the first change of representation in 20 years in the lower house of Congress. After spending two years as editor of Our National Progress, Day was appointed clerk in the Auditor General's office of Pennsylvania in 1862.

In 1878, Day was elected school director in Harrisburg, Pennsylvania. He was the first school board member and president of color. He won reelection in 1881, retaining his position on the board until 1884. Though he did not seek reelection in 1884, the public appealed for his return in 1887, and he was easily elected to another three years as Harrisburg School Board president. In 1879, during his tenure, Day also opened Livingstone College with J.C. Price, William H. Goler, and Solomon Porter Hood. Established in Salisbury, North Carolina, for students of color, this institution remains a predominantly black college.

In The Rising Sun, Dr. William Wells Brown praises Day's professional demeanor: "As a speaker, Mr. Day may be regarded as one of the most effective of the present time; has great self- possession and gaiety of imagination; is rich in the selection of his illustrations, well-versed in history, literature, science, and philosophy, and can draw on his finely-stored memory at will."

Day died in Harrisburg on December 3, 1900, at the age of 75. William Howard Day Cemetery was established in nearby Steelton in the 1900s as a burial place for all people, including people of color who were denied burial at the nearby Baldwin Cemetery. It remains a popular burial site for local African American families.