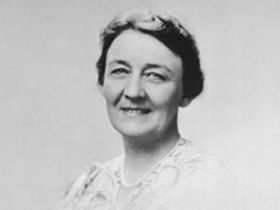 An extremely well-read illustrator and author, de Angeli's work The Door in the Wall (1949) won a Newbery Medal in 1950.

While children's author Marguerite de Angeli spent most of her life in Michigan, her formative years were spent in Philadelphia, Pennsylvania, between 1902 and 1916. She became a highly-honored children's book author, winning the Newbery Medal and receiving Honor Book status twice for the Caldecott Award. She died in Philadelphia in 1987.

Born in Lapeer, Michigan, on March 14, 1889, Marguerite de Angeli was one of six children. Her father, George Shadrach Lofft, was a photographer who struggled to provide for his wife, Ruby Adele Tuttle Lofft, and their large family. In 1902, the Loffts moved to Philadelphia, Pennsylvania, where Marguerite was raised with a strong awareness of all genres of literature. On April 12, 1910, she married John Daly de Angeli, and they had three children.

De Angeli entered high school in 1904. A little over a year later, she dropped out to become a choral singer and soloist for various churches in Philadelphia. Her love of music led her to meet her husband, a violinist. After they married, de Angeli devoted herself to raising a family. In the summer of 1921, de Angeli began illustrating a Baptist and Presbyterian Sunday school paper.

In 1935, de Angeli was asked by an editor to permanently write for a younger audience. She decided to take the offer, and she wrote her first story, which focused on two young children visiting the grocery store. Her first story, a realistic picture book with little plot, evolved into the Ted and Nina Series. In the same decade, de Angeli wrote Henner's Lydia(1936), a book about a regional minority, the Pennsylvania Dutch. After carefully researching Amish customs and beliefs, she made sketches of the scenery and people of Lancaster County, Pennsylvania.

Over the years, de Angeli's novels marked turning points in her development as a writer. Skippack School, which was written in 1939, contained conflict, plot, and characterizations that were more complex than those found her previous works. The following year, de Angeli developed her most fully realized female character in Thee, Hannah! (1940). In 1944, she wrote her first Caldecott Honor Book, Yonie Wondernose, which was the story of a curious Amish boy. Bright April, which appeared in 1946, was a story for boys and girls based on the lives of African Americans, a daring subject for a writer during this time. In 1950, de Angeli won the Newbery Medal for what critics have hailed as her most inspiring book, the historical novel The Door in the Wall (1949). In 1954, she received her second Caldecott Honor Book award for Book of Nursery and Mother Goose Rhymes (1954). In 1956, de Angeli's last award-winning story, the Newbery Honor Book Black Fox of Lorne, was published.

Two years after her husband's death in 1969, de Angeli wrote her autobiography, Butter at the Old Price, which was the story of a doughty lady who was worthy of royalty.

Marguerite de Angeli, a Distinguished Daughter of Pennsylvania (1958), died on June 16, 1987 in Philadelphia.