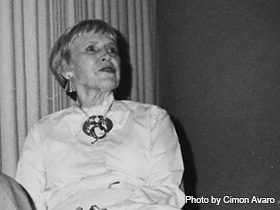 Catherine Crook de Camp is most famous for her collaborations with husband L. Sprague de Camp, a science fiction/fantasy novelist. Born in New York in 1907, she graduated from Barnard College with top honors, and began teaching English, history, and economics courses soon after. De Camp taught at many universities, and in 1939 wed L. Sprague de Camp; together they had two sons. The couple wrote many successful novels while residing in Villanova, Pennsylvania. After editing many of her husband's works as well, Catherine Crooke de Camp went on to have a successful career as a children's book author. In 1989, the de Camp family moved from the Philadelphia suburbs to Plano, Texas. In April of 2000, Catherine Crook de Camp died from Alzheimer's disease.

Born on November 6, 1907, in New York, New York, to lawyer Samuel and homemaker Mary, Catherine Crook was educated at St. Agatha's and The Lennox School. In her junior year at Barnard College in New York, she won her Phi Beta Kappa key, a prestigious and distinctive award presented to students with top honors. In 1933, after graduating from Barnard College magna cum laude, de Camp did her postgraduate work at Western Reserve (now Case Western) University and Columbia University. De Camp taught high school English, economics and history at the Oxford School in Connecticut from 1934 to 1935, and at the Laurel School in Shaker Heights, Ohio from 1935 to 1937. After moving back to New York and tutoring for two years at private secondary schools, she was introduced to her husbandL. Sprague de Camp by her sister.

On August 12, 1939, Crook married young science fiction writer L. Sprague de Camp and they soon began a collaborative writing process. Catherine started to handle the business side of the writing team; managing the couple's taxes, family finances, and the publicity for L. Sprague's work, as well as other jobs that helped stabilize the two writers and their two sons. Moving from New York to Villanova, Pennsylvania, de Camp spent a year working as an instructor at Temple University. While residing in Villanova, de Camp became a co-author and editor for her husband, and soon began writing books on her own.

At first, de Camp began to write books to help people manage money. The Money Tree (1972) and Teach Your Children to Manage Money (published in U.S. News & World Report) are still read today. However, the genre of her husband's work soon rubbed off on her and she began to write science fiction stories and anthologies for young children. While writing her own books, de Camp was also collaborating with her husband on many non-fiction and fiction novels, and working as an editor for his books and radio scripts. The de Camps' collaborations on science fiction and fantasy novels helped establish them as prominent fiction and nonfiction authors.

In 1989, the de Camps moved to Plano, Texas. In her final years, Catherine suffered from Alzheimer's disease, and in April 2000, died at age 92 from complications of the illness.