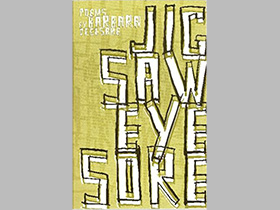 A resident of York, Pennsylvania,Barbara DeCesare is the author of poetry collections, including Silent Type (2008).

York, Pennsylvania, resident Barbara DeCesare is a poet and fiction writer. Her book of poetry, Jigsaweyesore, was published in 1999.

Barbara DeCesare started writing at age six after watching her mother compose letters to the editor of a local newspaper. "I've always written," she tells The Triangle writer, Erin Dorney. "Before I could make letters I used to pretend to write."

Growing up in Westminister, Maryland, DeCesare worked on her high school literary magazine and "surrounded [herself] with moody unsupervised teenagers..." Today she writes short fiction and poetry, and has been published in over 70 journals nationwide, including The Alaska Quarterly Review, The Birmingham Poetry Review, River Styx, and Gargoyle. Before moving to Pennsylvania, she also served as the Poet Laureate of 98 Rock (WIYY 97.9 Baltimore) for a time.

DeCesare thinks of herself first and foremost as a poet, saying, "I have a real love of word economy, of the straight shot. Poetry is the language that communicates with me, so I found it easiest to communicate through it." Her first book of poems Jigsaweyesore (1999), received great critical acclaim and has led to her reading poetry at hundreds of venues, including the Philadelphia Fringe Festival, The New School in New York City, and The Baltimore Museum of Art. In 2005, the book was also adapted into a musical for the Midtown International Theatre Festival in New York.

DeCesare's poetry explores themes of the everyday and oftentimes motherhood, femininity, sexuality, and even her craft of poetry itself. "I'm never working on a book, really. Just writing," DeCesare tells Lauren LaRocca of The Frederick News-Post. "If there's a book at the end, that's great."

Her work is notable for taking old forms and building on them in her free verse, which she describes in her poem "Frankenstein": "I've dug the legs of sonnets,/ scraped the brains of ballads,/ carried the spine of a sestina back/ from hell for this." These lines exemplify her style work, not just in their brutal lucidity, but also in their compact rhythms. "[A] poem is the best part of any novel," she says. "It's a straight shot, right where you need it most. I promise."

Her second collection, Silent Type (2008) is "[c]ool, painful, edgy, sweet, hilarious and sad," according to Goodreads reviewer Ann Michael. The collection explores relationships and intimacy with a heart that is, as described by writer David Shirley, "a stubborn, insistent, relentlessly defiant interlocutor, a 'bastard of a thing' to be wrested from the self and wrestled into form." DeCesare has also created a self-published, 28-track audio CD of poems titled Adrift (2007).

In addition to poetry and public performance, DeCesare is active in the academic world, serving as a workshop instructor at the annual University of Pennsylvania Writers' Conference and teaching literature and composition classes at Harrisburg Area Community College. "It's valuable to understand the mood associated with sound," she says in her discussion with Dorney:

I tell my students that each word needs to earn its place in the poem twice — once for meaning and once for sound. Cut what doesn't meet that criterion. When you write fiction, you work like an army taking over the village, going house to house and getting names, confiscating weapons. You can luxuriate in description. In a poem, you send in your five best men to take out the leader. That's it. Word economy. Bang.

Barbara DeCesare writes in the PAARTners Arts in Education Program and is a book review editor for both Wordhouse Publishing and Learning Services and the Baltimore Writers' Alliance (BWA) literary guide, for which she is also an at-large member of the executive board. She works as a Legal Assistant in Maryland by day and is a current resident of Dallastown, Pennsylvania. "[T]he distance between York and Baltimore has gotten shorter," she says. "MD writers are making the trip north, and PA writers are increasingly invited to Maryland events. This was something I really hoped would happen out of the reading series I hosted at YorkArts [now Creative York], and it's exciting."