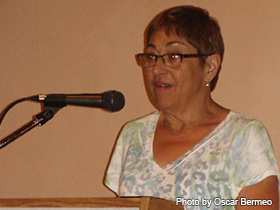 Oft-honored poet Toi Derricotte is a Professor Emerita at the University of Pittsburgh.

Born in Michigan, Toi Derricotte wrote poetry from a very early age, concentrating on her relationship with her abusive father, feminism, slavery, and her attitude toward motherhood. She has written poetry collections, memoirs, and various essays; much of her work has been acknowledged with awards, fellowships, and prizes. She was a featured poet in the Pennsylvania Center for the Book's 2012 Public Poetry Project. Derricotte founded the Cave Canem Foundation and is a Professor Emerita at the University of Pittsburgh.

Born in 1941 on April 12 in Hamtramck, Michigan, Antoinette (Toi) was the only child of Benjamin and Antonia Webster. She began writing poetry and journaling at a young age, capturing her experiences as a light-skinned African American and an undertaker's daughter. Her father played a heavy role in her upbringing by abusing her and exposing her young eyes to the perils of death during his career.

In 1962, she married Clarence Reese and had one son with him before divorcing in 1964. She took time to focus on her schooling, earning a degree in special education from Wayne State University in 1965, before she began teaching children who had disabilities in the Detroit school district. In 1967, she married Bruce Derricotte and moved to New York City.

With a newfound voice, Derricotte published her first poem in the New York Quarterly in 1972. Her first collection, The Empress of the Death House, was published in 1978, detailing her personal experiences with death, abuse, and her concerns with being a mother. Her provoking distaste for female suppression had critics comparing her works to those of Anne Sexton and Sylvia Plath.

Derricotte followed with the collections, Natural Birth (1983), Captivity (1989), and Tender (1997). In 1998, Tender won the Paterson Poetry Prize. In Captivity, she addresses the persistent issue of race and inequality as it slinks from the years of slavery into modern times. With its sometimes shocking yet deep-rooted style, this third collection of poems had critics comparing Derricotte's work to that of Emily Dickinson and Walt Whitman.

The poem "Boy at the Paterson Falls," from Captivity, tells the story of a boy who throws a dog down a waterfall to its death — a study of innocence being destroyed. This poem was selected for publication by the Public Poetry Project of the Pennsylvania Center for the Book in 2012.

In addition to poetry, Derricotte has also published the memoirs: The Black Notebooks: An Interior Journey (1998) and The Undertaker's Daughter (2011). The former was selected for the Anisfield-Wolf Book Award in Nonfiction from the Cleveland Foundation and also won the Black Caucus of the American Library Association Award for Nonfiction. She has also had essays included in The Best American Essays—"Beginning Dialogues" in 2006 and "Beds" in 2011.

Among many other awards and prizes, Derricotte has been granted fellowships from the National Endowment for the Arts, the New Jersey State Council on the Arts, the Rockefeller Foundation, the Guggenheim Foundation, and the Maryland State Arts Council. She was named a Distinguished Daughter of Pennsylvania in 2009 and was awarded both the Paterson Poetry Prize for Sustained Literary Achievement and the PEN/Voelcker Award for Poetry in 2012.

Toi Derricotte a Professor Emerita at the University of Pittsburgh and, at the time of this writing, a member of the Marsh Hawk Press' Artistic Advisory Board.