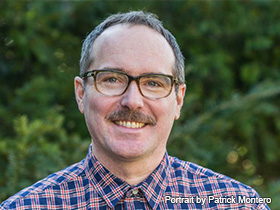 Thomas Devaney is a professor and poet whose interdisciplinary approach yields a variety of collaborative works and projects, such as poetry written in response to Philadelphia Art Museum exhibits, the "Under an Oak: A Tree Poetry Tour" project conducted with his students, and his co-created collection The Picture that Remains (2014) that pairs his poetry with photographs of Philadelphia by Will Brown. Devaney has been recognized by the University of Pennsylvania's Critical Writing Program with a Distinguished Teaching Award and earned fellowships from the Pew Center for Arts & Heritage and MacDowell Colony. His poem "The Blue Stoop" was selected for publication by the Public Poetry Project of the Pennsylvania Center for the Book in 2018. Works by Devaney include You Are the Battery (2019), Getting to Philadelphia: New and Selected Poems (2019), and others. At the time of this writing, he is a Haverford College Visiting Assistant Professor of English and teacher with the Tri-Co Philly Program.

His poem "The Blue Stoop," from Runaway Goat Cart, embodies this very mission and was selected for publication by the Public Poetry Project of the Pennsylvania Center for the Book in 2018. Selection Committee member, Laura Spagnoli describes the poem as "a love letter to a bygone place, more precisely, a bygone group of people who frequented the blue stoop."

The piece, prompted by the photo 4th of July BBQ (2011) by Philadelphia photographer Zoe Strauss, even inspired cofounders Emma Eisenberg and Joshua Demaree to name their meeting place for Philly writers Blue Stoop, which they describe as "a hub for literary Philly."

Devaney earned an MFA in Creative Writing from Brooklyn College - City University of New York (CUNY) in 1998, and worked at the University of Pennsylvania (UPenn) for nine years, where he taught and (between 2001-2005) served as the program coordinator of the Kelly Writers House. He also produced the 88.5-FM WXPN radio program, "Live at the Writers House."

In 2008, he was recognized with a Distinguished Teaching Award from UPenn's Critical Writing Program, a program that has received a Conference on College Composition and Communication (CCCC) Writing Program Certificate of Excellence.

"I am a poet today because of music," Devaney tells the Pew Center for Arts & Heritage, which named him a Pew Fellow in 2014. "Poems that engage the visual and the musical show us how words—at their most dynamic—can help us see, feel, connect, question, and dream."

Devaney's approach is often interdisciplinary, having collaborated with the Institute of Contemporary Art on projects, such as "Seven Writers" (2014) and "Tales from the 215" for "Philadelphia Freedom" with Strauss (2006); written poems in response to photographs for the Philadelphia Museums of Art (2009); launched the poems + video project ONandOnScreen; and initiated "Under an Oak: A Tree Poetry Tour" (2010) with the Arboretum Association at Haverford College, where he teaches Creative Writing and oversees other collaborative projects as of this writing.

About his craft, Daveney says in WHYY's Friday Arts, "…I'm interested in writing about things I do not have full access to myself. I don't know what I'm looking at, but I know I'm seeing something, and so that's sort-of part of the generative place of poetry for me." Of his collaborative book The Picture that Remains (2014) that pairs his poetry with photographs of Philadelphia by Will Brown, he says each poem "has its own kind-of world, and this photograph has its own world, together there's an overlap and that's enough for it to work."

At the time of this writing, Devaney is a Visiting Assistant Professor of English at Haverford College and teaches for the Tri-Co Philly Program, a program that engages the students and faculty of Bryn Mawr, Haverford, and Swarthmore with the Philadelphia area through urban-themed coursework "enhanced by activities that take advantage of the dynamic cultural, civic, and historic opportunities offered by America's sixth-largest city via guest speakers, performances, neighborhood tours, trips to museums and libraries, and more," according to Haverford Headlines Director of News and Social Media, Rebecca Raber.

Thomas Devaney's own works include The American Pragmatist Fell in Love (1999), A Series of Small Boxes (2007), You Are the Battery (2019), and others. His 2019 collection Getting to Philadelphia: New and Selected Poems was published by Hanging Loose Press in 2019 and, in the words of Philadelphia poet Major Jackson, demonstrates how:

"Devaney knows [Philly's] hidden histories and speakeasys, literary and graf artists, legendary corners, world eminences, but even more, its deep mysteries, which he sublimely cast as a sustained lyric meditation from poem to poem such that each glory-soaked line melodically reinscribes its magic as myth and song."