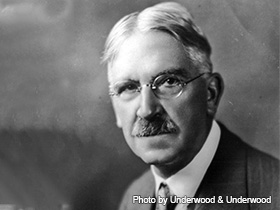 John Dewey was born in Burlington, Vermont, on October 20, 1859. He attended the University of Vermont in 1875 and graduated in 1879. He then taught high school in Oil City, Pennsylvania, for two years before returning to Burlington to teach. He attended Johns Hopkins for his doctorate in philosophy, graduating in 1884. His first major book, Psychology, examined the emerging field of scientific psychology with a philosophic approach. Dewey was very concerned with education. He believed education should be a balance between curriculum-centered and child-centered teaching methods. He died at his home in New York City on June 1, 1952, from pneumonia and complications from a broken hip. John Dewey remains one of the most prominent intellectual and philosophical figures in America.

John Dewey was born on October 20, 1859, in Burlington, Vermont. His mother was Lucina Artemisia Rich and his father, a shopkeeper, was Archibald Sprague Dewey. Dewey had many influences as a child, including the strict Calvinistic beliefs of his mother and his father's interest in British literature. He was also influenced by family friends that served on the faculty at the University of Vermont. Dewey attended the University of Vermont at the age of 15, from 1875-1879. It was here that he learned about Darwinism. Henry A. P. Torrey was a major influence and exposed Dewey to his social and speculative philosophy. After graduating in 1879, Dewey taught high school in Oil City, Pennsylvania, for two years. In 1881, he taught at a small school near Burlington with the goal of studying philosophy with Torrey. Dewey published two articles in the Journal of Speculative Philosophy and soon was encouraged by Torrey to attend Johns Hopkins and receive his Ph.D in philosophy. At Johns Hopkins, Dewey studied logic with Charles S. Peirce and experimental psychology with G. Stanley Hall. Dewey was most influenced by George Sylvester Morris' Neo-Hegelian idealism. He earned his Ph.D in 1884 and accepted a position at the University of Michigan. Dewey married one of his students at Michigan, Harriet Alice Chapman, in 1886. They had seven children.

During his time at Michigan, he wrote his first major book, Psychology. In this book, he examined various areas of scientific psychology, including memory, thinking, imagination, perception, sensation, attention, and motor control. According to Larry Hickman, writing for the American National Biography Online, he approaches the study of psychology with a "philosophic method." During this time, psychology was an emerging discipline and Dewey wrote this book with the intent of examining psychology as its own subject, independent of philosophy. However, he did not wish to abandon philosophic principles completely. Dewey wanted to make his work an introduction to the study of philosophy:

I have accordingly endeavored to avoid all material not strictly psychological, and to reflect the investigations of scientific specialists in this branch; but I have also endeavored to arrange the material in such a way as to lead naturally and easily to the problems which the student will meet in his further studies, to suggest the principles along which they will find their solutions, and above all, to develop the philosophic spirit.

While Dewey was a very influential thinker in both psychology and philosophy, his main interest was education. He believed education was extremely important and that it should be based on how the mind actually works. He also believed that education was necessary for young people to become productive members of a democracy. Dewey believed the best way to achieve this type of education was to rely on new developments in the field of pragmatism and the emerging field of psychology.

Pragmatism is the school of philosophy that approaches education with a practical angle. Advocates of pragmatism state that education should be based on facts and experiences, rather than predetermined notions. Students should be able to change their ways of thinking when circumstances change. Dewey found a middle ground between curriculum centered and child centered theorists. Curriculum-centrists believed that learning should be based on drills, tests, lectures, and rules only. Child-centrists opposed this and thought that children should be free to engage in any activity, whether it was educational or not, with the goal of uninhibited growth. Dewey believed both ideas were too extreme for education. He wrote many works in the field of philosophy, psychology, education, politics, and political philosophy. His educational works included Progressive Education and the Science of Education, Democracy and Education: An Introduction to the Philosophy of Education, and The Child and the Curriculum. One of his famous psychological works was How We Think. The focus of this book, how people think, was the basis for many of his philosophical works. Other works involving psychology were Psychology and Social Practice and Human Nature and Conduct: An Introduction to Social Psychology. Dewey wrote many philosophical works as well, including Outlines of a Critical Theory of Ethics, Essays in Experimental Logic, and The Influence of Darwin on Philosophy, and Other Essays in Contemporary Thought.

Dewey's first wife, Harriet, died in 1927. He later married Roberta Lowitz Grant in December of 1946, and they adopted two children. His ninetieth birthday, in 1949, was celebrated in New York and Vermont, as well as during many academic conferences that focused on his work. John Dewey died at his home in New York City, on June 1, 1952. His death resulted from pneumonia and complications from a broken hip. John Dewey continues to be one of the most significant intellectuals and philosophers in America. He challenged social issues and contributed to the fields of psychology, education, and philosophy. He questioned others' interpretations, and challenged the status quo.