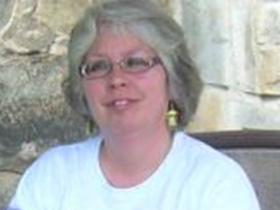 Susan Dexter writes fantasy novels and has won various awards for her books, including Books for the Teen Age (1993) for The Wizard's Shadow. She was born in Greenville, Pennsylvania. Throughout her life she has worked as a librarian, teacher, artist, and writer. She now lives in New Castle, Pennsylvania, where she continues to write and connect with her readers at conventions and via her blog "takeupthequest."

Susan Dexter is of Scottish and English descent and was born on July 20, 1955, to Ward Dexter, a salesman, and Donna Jean (Orr) Dexter, a bookkeeper, in Greenville, Pennsylvania (PA).

"I think I was born to be a writer—it just took me a long time to figure it out..." Dexter says. In the meantime, she attended a vocational-technical high school in New Castle, PA, and went on to work as a fashion layout artist from 1974-1992 for Fishers Big Wheel, Inc. It was in 1981 that her first book, The Ring of Allaire (the first in "The Winter King's War" trilogy), was published. In 1992, she became a librarian and in 1997 a bookkeeper for the Northminster Presbyterian Church. Around that same time (1996), she began giving guest lectures related to her fiction at schools and conventions, and later began teaching adult education fiction writing classes (2000). For five years, from 1993-1998, she held a position as a member of the board of directors for the Friends of the New Castle Public Library. Publications she has contributed to include: Thistledown; Excalibur; The Writer's Handbook; Ricardian Register; Horse Illustrated; Fantasy; Writer; and Magazine of Fantasy and Science Fiction.

"I like to think of fantasy as a broad umbrella under which I can write any sort of tale I choose....Fantasy is a land without limits, its only boundaries my imagination. It's a good home for those things I love best—horses and falcons and castles, noble heroes and wise maidens, swords and capes and magic," she writes. With a background in commercial art, Dexter has also created the visual maps within some of her books, and has exhibited her artwork, including fiber arts and paintings, at PA establishments such as the Bottlebrush Gallery, the Hoyt Institute of Fine Arts, the New Wilmington Heritage Fine Arts Show, the World Fantasy Convention Art Show, the Inspired by Nature Show, and others.

Dexter received the Merit Award for her art in 1976 from the Lawrence County Open Arts Show, which also acknowledged her with the Distinguished Award in 1982 and 1983. One of her literary works, The Wizard's Shadow was listed among the "Books for the Teen Age" in 1993 by the New York Public Library.

Susan Dexter lives in New Castle, Pennsylvania, in a vintage house that she has restored and continues to frequent PA book fests and conventions to promote writing, art, and to read from and discuss her latest books.