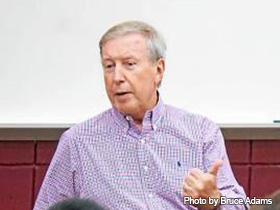 Raised in Folsom, Pennsylvania, sportswriter Ray Didinger has reported on and analyzed Philadelphia football games since 1969, for both television shows and newspapers. He is a senior producer at NFL Films, a member of both the NFL Hall of Fame and the Philadelphia Sports Hall of Fame, and the recipient of several Emmy Awards recognizing his sports writing, having written over ten books on the topic.

Ray Didinger unknowingly encapsulated his career in a single statement. While discussing offensive philosophies in football he asked, "If you can do two things well, isn't that better than just being able to do one?" Didinger has reported and analyzed football through every conceivable medium. This achievement has grown throughout a lifetime of passion for sports.

Ray Didinger was born to Raymond and Marie Didinger on September 18, 1946, in southwest Philadelphia. Sports were part of Didinger’s life from an early age; his upbringing had a heavy focus on outdoor play. Didinger’s parents were avid Eagles fans and would take vacations every year to Hershey, Pennsylvania, to watch preseason practice and play. Didinger attended his first Eagles’ game at Connie Mack Stadium in 1956 with his grandfather. His interest was further fostered and connected to writing through the Chip Hilton Sports Book Series. William "Chip" Hilton, a classic, "All-American" high school athlete, is a character in the novel series by Clair Bee. Another influence came from his fervent reading of sports writing columns (especially those by Sandy Grady) in the Philadelphia Bulletin, a publication that he eagerly awaited every week. This reading led to his ultimate goal of writing about the Eagles for the same newspaper.

After graduating from St. James Catholic High School in Chester, Delaware County, Didinger received his BS in Communications from Temple University in 1968. From 1968 to 1969, he covered sports for the Delaware County Daily Times. Two years later, at the age of 23, Didinger took over the pro-football beat at the Philadelphia Bulletin. In fact, on his very first day at work, he found that his desk was right next to Sandy Grady, the sportswriter who had sparked his passion for sports writing.

Didinger worked at the Bulletin from 1969 to 1980, and the Philadelphia Daily News from 1980 until 1996, when he made his transition to TV and film by joining NFL Films in Mt. Laurel, NJ. Though he ultimately transitioned away from his roles in these publications, he still excelled in them. Didinger received the Pro Football Writers of America Award for Outstanding Feature Story in 1991 and the Dick McCann Memorial Award in 1995, making him the youngest person to receive the McCann and earning his spot on the Writer's Honor Roll.

Film was not an industry Didinger ever expected to enter, but after attending a film symposium, his passion for the field was ignited. Didinger wrote and produced a documentary biography of one of his favorite coaches, Dick Vermeil, entitled Dick Vermeil: A Coach for All Seasons" for which he was awarded the Best Biography of 2000 at the Aurora International Film Festival. Didinger also wrote and co-produced the telecast profile Winning is Living and Losing is Dying: The George Allen Story, which appeared on ESPN. Sports Illustrated chose the work as the best sports documentary of 2001.

In addition to his writing and film productions, Didinger developed a rewarding career as a radio and television personality. In 2005, Philadelphia Magazine named Didinger Best Sports Radio Personality in their "Best of Philly" issue for the weekend broadcast on WIP 94 with Inquirer sportswriter Glenn Macnow. Didinger is also a panelist on "Post-Game Live," a Philadelphia Eagles post-game show that includes Pennsylvania Governor Ed Rendell and several other analysts. For this show, Didinger received a second "Best of Philly" award for Best Local TV show in 2005.

During his years at the Bulletin, the Daily News, and NFL Films, Didinger wrote and edited several books about football. These books include, among others, Game Plans for Success: Winning Strategies for Business and Life from Ten Top NFL Head Coaches (1995), Football America: Celebrating Our National Passion (1996), The Eagles Encyclopedia (2005) and The New Eagles Encyclopedia (2014).

In addition to Didinger’s notable inclusion in the Professional Football Hall of Fame in Canton, Ohio (1995), he was also the first print journalist inducted into the Philadelphia Sports Hall of Fame in 2005. In 1998, Didinger introduced former Philadelphia Eagle wide receiver Tommy McDonald at his Hall of Fame enshrinement. McDonald was Didinger’s childhood hero, and he would later immortalize his relationship with the star by writing the play Tommy and Me (2016).

These awards are certainly not the only ones of Didinger's career. He has won multiple Emmy Awards for his work on NFL Films and the Turner Network's Football America. Didinger has been named Pennsylvania Sportswriter of the Year more than four times. He has also won Keystone Press Association Awards for feature writing, Philadelphia Press Association awards for reporting, and Associated Press awards for column writing. In 1991, he won the Pro Football Writers of America award for for an outstanding feature story about dissension amongst the 1990 Philadelphia Eagles, their last year under head coach James "Buddy" Ryan.

During the football season, Didinger wrote "A View from the Hall," a weekly column for Comcast Sportsnet's website. He also wrote and produced two one-hour shows for the NFL Network's series entitled America's Game. The series features each of the 40 Super Bowl winners, and Didinger highlighted the 1972-73 Miami Dolphins.

Ray Didinger is a true professional and genuinely passionate about his field. He possesses astonishing knowledge of the game and its history. While watching film of the 1972 and '73 Dolphins, he knew from which year the unlabeled tape came, just from noting the left offensive tackle, who was moved to that position after playing right tackle on the undefeated 1972 team.

He cares about sports to a unique degree. Above all of his numerous and prestigious accolades, Didinger values his accuracy in reporting facts, which he believes is principal in journalism. Many shows and columns today focus on entertainment rather than information and sometimes exaggerate and misinterpret reality and fact. In his career, no newspaper, publishing company, or studio has ever run a retraction of misinformation contained in his work.

At the time of this writing, Ray Didinger lives in Philadelphia with his wife Maria Gallagher. His memoir, Finished Business, was released in 2021, and reflects on his fifty years of writing.