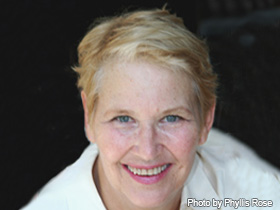 Acclaimed writer Annie Dillard was born in Pittsburgh in 1945. Educated at Virginia's Hollins College, Dillard has led a very successful professional life as a writer. Winner of the 1975 Pulitzer Prize for Pilgrim at Tinker Creek(1974), Dillard has explored the relationships between spirituality, nature, and philosophy.

Meta Ann (Annie) Doak Dillard was born in Pittsburgh, Pennsylvania, on April 30, 1945. Her parents were Frank Doak, a business executive, and Pam Lambert Doak. In 1965, Annie Doak married Richard Henry Wilde Dillard. The couple divorced in 1975, and on April 12, 1980, she married Gary Clevidence. They divorced in 1988. She later married Robert D. Richardson, Jr. in 1988.

Dillard attended Hollins College in Virginia, where she majored in English. She met Richard Dillard, her first husband, when he was her writing teacher, and the two married at the end of her sophomore year in 1965. She obtained her BAdegree in 1967 and her MAdegree the following year.

Dillard's writing talent has earned her much literary recognition. In 1975, she won the Pulitzer Prize for general nonfiction for Pilgrim at Tinker Creek (1974). In 1987, she was a National Book Critics Circle Award finalist for An American Childhood (1987). She was also a recipient of the Western Pennsylvania Historical Society History Makers Award in 1993.

Dillard's novelThe Maytrees was published in 2007. The Maytrees is set in Cape Cod and begins in the 1940s, delving into the topic of lifelong marriage and love. She won several awards for this novel: one of the Top Ten Books of the Year in the New York Times Book Review, a spot on the Irish Times "The Best of the Page-Turners" list in 2007, and the IMPAC Award for one of the best novels worldwide in 2008. She most recently published a collection of essays entitled The Abundance: Narrative Essays Old & New (2016).

At the time of this writing, Dillardmaintains her own website and updates the information herself for scholars' use. This stemmed from her frustration regarding the massive amounts of misinformation about her on the Internet. Dillard taught at Western Washington University for four years as Scholar-in-Residence and has held her position as Professor Emeritus at Wesleyan University for many years. She emphasizes the importance of using Internet resources with caution. On her web site, she writes: "The teacher in me says, 'The way to learn about an author is to read the text. Or texts.'"