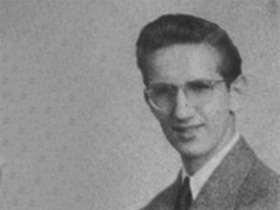 Steve Ditko was born on November 2, 1927, in Johnstown, Pennsylvania. Ditko took an interest on drawing from a young age and began his career as an artist directly after he finished his service time in the military. Ditko's career spanned many years and he worked with all the major publishers, along with many small press companies. During his career, he co-created Spider-Man, Doctor Strange, and many other notable characters. His work strongly influenced everyone else in the industry and is still widely reprinted. Ditko died on June 29, 2018 at the age of 90.

Steve Ditko was born on November 2, 1927, in Johnstown, Pennsylvania. Ditko's parents were Ukrainian immigrants and his father worked in a mill. He grew up in Johnstown with his parents, a sister, and a brother. Ditko's skill with his hands emerged at a young age. He began drawing and crafting models airplanes during junior high. Throughout his youth he was influenced and inspired by the work of cartoonist Will Eisner. Will Eisner, considered to be the father of the graphic novel, created many of his groundbreaking works during this time such as A Contract with God and The Spirit. Ditko's love of the art would later lead him to receive the most prestigious Eisner Award offered.

Ditko graduated from Johnstown High School in 1945 and immediately began his military service. During Ditko's service he was stationed in post-World War II Germany. Ditko continued practicing his craft while overseas by drawing cartoons to send to his family along with letters. When Ditko had completed his term of service, he was discharged from the military and returned to home.

Shortly after his return, he moved to New York City to begin professionally pursuing his craft. He enrolled in the Cartoonists and Illustrators School (now the New York Visual and Arts School). Ditko's skill increased rapidly at school and he was able to study under early Batman artist/inker Jerry Robinson. By the time Ditko was completing his studies, he was ready to begin his professional publication career.

The up-and-coming company Crestwood Publications hired Ditko quickly. His first professional publication came in 1953 when he penciled and inked Black Magic Vol.4 #3. Ditko also began an early relationship with Charlton Comics in 1954, when he was credited with the cover art for Space Adventures #10. Ditko would maintain a relationship with Charlton Comics throughout his career and returned to them for work throughout the decades.

In April of 1956, Ditko began working with Atlas Comics, which would eventually evolve into Marvel Comics. Ditko's earliest Marvel credits include Journey into Mystery and Curse of the Weird. Ditko continued working for Marvel throughout the late 1950s and early 1960s writing science fiction and horror stories. Stan Lee had made his name in Marvel comics in the early 1950s with the creation of The Fantastic Four. In the mid-1960s, Stan Lee began putting together his idea for a teenage super hero with the powers of a bug or a spider. Lee went to his usual artist Jack Kirby for sketches of the potential character. Lee did not feel that Kirby shared his vision for the young super hero and instead turned to Ditko to give the project a shot. Ditko's art and Lee's script fit together in a way that made both parties happy and they began the project that would become The Amazing Spider-Man. In August of 1962, Spider-Man debuted in Amazing Fantasy #15. The character immediately became a success and was given its own title, The Amazing Spider-Man.

During his run with Marvel in the 1950s and 1960s Ditko also found time to create the character Doctor Strange. Although this creation is often overlooked to his success with Spider-Man during this period it is argued that some of his best early art work came out through this character. Doctor Strange debuted in Strange Tales #110, in 1963.

During the 1960s, Ditko began to become very private and desired that fans and the media respected his personal life and privacy. He rarely conducted interviews or made public appearances. Ditko asserts, "When I do a job, it's not my personality that I'm offering the readers but my artwork. It's not what I'm like that counts; it's what I did and how well it was done..." He maintained this position whenever public appearances were requested or he felt interviewers crossed the line by asking him about his personal life. His personal politics and ideologies did however start to become more prevalent during this period. Ditko and Lee could not come to an agreement on the secret identity of the Green Goblin in the title due to Ditko's ideas concerning realism. Ditko insisted that the villain should be just a face in the crowd because in real life that is how it would happen. Ditko had very firm ideas about good and evil and how they should be represented in his work. Lee was a believer in suspended belief and wanted the villain to be someone in Spider-Man's personal life to produce drama and a conspiracy. Ditko would not abandon his ideas concerning realism and continued insisting that the Goblin should be a stranger. This led to Ditko leaving the title, and Marvel, 1966. He would return to Marvel from time to time throughout his later career.

While separated from Marvel, Ditko began working with DC Comics and a few other independent companies. At this point in Ditko's career he created a few new characters for DC including The Creeper. He also began producing pages for Charlton again. Although Charlton did not print as many pages as DC and Marvel, they did provide creative freedom for the artists more than the big publishers. Ditko used this opportunity to produce work that was too politically controversial for the big publishers.

Ditko continued his stay at small press publishers throughout the late 1960s and into the 1970s. He returned to DC and Marvel a few times throughout the 1980s and early 1990s, but stuck mostly to his freelancing small press career. In 1990, Ditko was inducted into the Jack Kirby Hall of Fame. This prestigious award is presented at the Harvey Awards (a comic book industry award ceremony) and is the equivalent of a lifetime achievement award.

Less than a decade after receiving his award, Ditko officially retired from mainstream comics in 1998—though he continuedto publishwith small press companies.