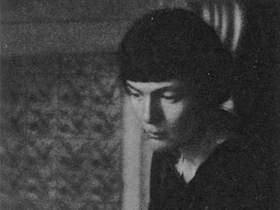 The Imagist poet Hilda Doolittle, better known as H.D., was born in Bethlehem in 1886.

Hilda Doolittle, penned H.D. by Ezra Pound, was a writer who was most famous for her Imagist poems. Living a life filled with close friends and stricken with relationship difficulties, Doolittle poured her stories into her many memoirs, novels, and verse, for which many she received awards. She was born in Bethlehem, Pennsylvania on September 10, 1886, and stayed in the state until she left Bryn Mawr College in 1911. After leaving the United States, H.D. spent the rest of her life writing, which ended on September 21, 1961, in Europe.

Born to a large familyin 1886, Hilda Doolittle (H.D.) began life with an interesting background. Her parents, Charles Leander Doolittle and Helen Eugenia Wolle, were very different people: Helen was grounded in her Moravian values while Charles, an astronomer, believed in science and mathematics. Despite separate religious beliefs, H.D.'s parents still wanted their daughter to have a sound education. So, H.D. began her education in Moravian schools and then moved on to a private school system in Philadelphia.

Education was an important step in young H.D.'s life—it was during her educational career that H.D. met some of her life-long friends: Ezra Pound, William Carlos Williams, and Marianne Moore. After graduating from Philadelphia's Friends' Central School in 1905, H.D. attended Bryn Mawr College for three semesters. During this time, H.D. became rather close with Pound and Moore. Specifically, H.D. and Moore were classmates and, according to Caroline Zilboorg of the American National Biography, Pound became a close friend of H.D.'s beginning with his influences on her reading and writing of poetry. This closeness between H.D. and Pound is shown in her book, End to Torment: a Memoir of Ezra (1979), in which she gives the account of their relationship/friendship in diary form. Soon after leaving school, H.D. visited Pound in Londonin 1911,with Frances Gregg (H.D.'s then-current lover) and Gregg's mother. According to H.D.'s own accounts in her memoir, End to Torment, Pound convinced H.D. to stay in London with him instead of returning to the United States with her companions. Here Pound introduced Richard Aldington to H.D.; the two married within two years of meeting and the couple resided in Europe.

H.D.'s writing career took off during the early years of her marriage to Aldington. It was during these first few years of marriage in which H.D. grounded her "image" as a poet. The woman poet showed signs of the new Imagist ideal/writing style for her poetry. According to H. Hernandez in "A Brief Biography of H.D.," an "Imagist held three principles: direct treatment of the subject, allow no word that was not essential to the presentation, and follow the musical phrase rather than strict regularity in their rhythms." H.D.'s early poetry shows adherence to these principles. However, H.D. did not like the Imagist label she received as she published her poetry: it was a detested label that she tried to escape throughout her life.

As H.D.'s writing career began, Pound began editing her work and sending it off to be published. However, the detested Imagist label of H.D. came as a fault through Pound. According to Zilboorg, in the first year of H.D. and Aldington's marriage, Pound, while editing one of H.D.'s poems, signed the initials "H.D." and labeled the poem "imagiste" before sending the poem to Harriet Monroe, the creator and publisher of the magazine Poetry. Single-handedly, Pound gave Hilda Doolittle the new, lasting image whether she liked it or not. Zilboorg proceeds to mention that "this 'naming' was to become symbolic of the struggle for her own identity that H.D. confronted as a woman and writer throughout her life." During the next four years, H.D. published her first two works (poetry collected into an anthology, Des Imagistes (1914); and Sea Garden(1916)) all of which were edited by Pound. An example of one of H.D.'s early imagist poems is from one of H.D.'s first works, Sea Garden:

more precious
than a wet rose
single on a stem—
you are caught in the drift.

Stunted, with small leaf,
you are flung on the sand,
you are lifted
in the crisp sand
that drives in the wind.

Can the spice-rose
drip such acrid fragrance
hardened in a leaf?

This poem, a great example of Imagism, is entitled "Sea Rose" which is included in Collected Poems, 1912-1944 (1983). This type of poetry was becoming extremely popular in the early 1900s, and many people still love Imagist poetry for its simplicity and beauty.

The life of H.D. served as inspiration for most of her works. Many of the books and poems that she wrote throughout her adult life were based on her intimate (whether sexual or platonic) relationships with men and women. The stressful marriage Aldington and H.D. shared was a stepping stone towards the rest of H.D.'s intimate relationships. After Aldington volunteered for service in the First World War, both H.D. and her husband looked for intimacy in other people. According to Hernandez, Aldington took a mistress named Dorothy Yorke and H.D. gave birth to a daughter named Frances Perdita in 1919 who was fathered by a musician named Cecil Gray. Soon after giving birth to her daughter, H.D. and Aldington tried to reconcile their marriage—their attempt failed and they remained separated, but friendly, until they divorced in 1938. According to Hernandez, a woman named Annie Winifred Ellerman (Bryher) and H.D. met in 1918 and formed a close "friendship [which] blossomed into love." Bryher became the woman with whom H.D. spent her remaining romantic life. During this time, H.D memorialized the trying life that she lived in three written works: Bid Me to Live (1960), Asphodel (1992), and Paint It Today (1992). The latter two of the works were published posthumously. After meeting Bryher, the two women traveled through Europe (mainly in Greece and Paris) before settling, together, in Switzerland.

During the later years of H.D.'s life, her work became increasingly popular. H.D. was well-respected amongst her peers and she was finally moving away from the Imagist ideals beginning with a poem entitled "The Walls Do Not Fall." This poem was one of three memorializing her life during the 1930s and 1940s. The following excerpt is Section 15 of "The Walls Do Not Fall" which is included in H.D.'s Collected Poems, 1912-1944:

Too old to be useful
(whether in years of experience,

we are the same lot)
not old enough to be dead,

we are the keepers of the secret,
the carriers, the spinners

of the rare intangible thread
that binds all humanity

to ancient wisdom,
to antiquity;

our joy is unique, to us,
grape, knife, cup, wheat

are symbols in eternity,
and every concrete object

has abstract value, is timeless
in the dream parallel

whose relative sigil has not changed
since Nineveh and Babel.

Even though H.D. detested the Imagist label, some loved her Imagist poetry. A woman named Rosanna Warren, a writer who adores H.D.'s early Imagist work, wrote an article for Poetry making a comment on "The Walls Do Not Fall" saying, "Almost nothing is seen [...] she either lectures about how to 'recover old values,' or she lurches from one clich?? to another: 'flood of sorrow'; 'daring the blinding rage'" (Warren, 2004). Not everyone loved H.D.'s newfound freedom as much as H.D. did herself.

In the 1960s, H.D. published the renowned work/epic poem, Helen in Egypt (1961), which Brian Glaser in the Journal of Modern Literature calls her "last ambitious poem." The poem has three parts (much like her previous Trilogy) which are entitled "Pallinode," "Leuk??," and "Eidolon." This newest trilogy is yet another memorial of her past through the character "Helen," set in a mythological world.

There have been many different readings of the epic poem one of which is recorded by Rachel Connor in H.D. and the Image, "although Helen's quest for a voice within the text of Helen in Egypt appears to unsettle the privilege afforded both mythological discourse and the visual, it is at odds with the 'silencing' by the text of the Egyptian resistance to British colonialism at the time of the poem's composition." Glaser, who has a different opinion, states that "H.D. presents a character who is coping imaginatively with the challenge of establishing her independence from within her gendered position. Like a dream, her words more through and arrange a network of associations so that the conflictual question of her loyalties as a woman is resolved with a symbolic act—the invocation of her brothers—rather than a compromise." It is quite possible that no one will ever fully agree on what this epic poem is truly about. However, one statement is certain: this work written by the "Imagist" H.D. shows the growth of her movement away from her detested label, much like her Trilogy and "The Walls Do Not Fall" did. Helen in Egypt is another great example showing that H.D. is more than her label can allow.

As H.D. broke away from Imagism, she began exploring different ideas and ideals. It was during this time that she befriended Sigmund Freud and became his pupil in the early 30s. Twenty years later, after psychoanalysis and a mental breakdown, H.D. memorialized her time with Freud in her book, Tribute to Freud (1956). It was after World War II, in which H.D. suffered the mental breakdown and, according to Zilboorg, the breakdown caused the woman to spend the rest of her life living in hotels and, finally, clinics.

Despite a mental breakdown, H.D. wrote books of prose and poetry (some of which were published posthumously) throughout the remainder of her life. She won many awards for her writing including: the Guarantors Prize, 1915, the Levinson Prize, 1938, and the Harriet Monroe Memorial Prize, 1958, all from Poetry; Brandeis University Creative Arts Medal, 1959; Award of Merit Medal for poetry, National Institute and American Academy of Arts and Letters, 1960; and the Longview Award, 1960, from Bryn Mawr College.

Hilda Doolittle lived a long and fulfilling life. Towards the end of her life, H.D. wrote a letter to Norman Holmes Pearson, a friend she had encountered in the United States some years earlier. Hernandez records the letter as saying, "I think I did get what I was looking for from life and art." H.D. then had a stroke in the summer of 1961, and died two months later on September 21, in Z??rich, Switzerland. Although H.D. had passed away, her poetry and other writings were still prized and published continually until 1997. The loved poet and writer was brought back to the United States and buried in her hometown in Nisky Hill Cemetery.