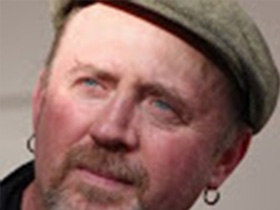 Sean Thomas Dougherty is theauthor of poetry and mixed-genre books, including The Biography of Broken Things (2002) and Except by Falling (2000).

Sean Thomas Dougherty has authored and edited books of poetry and mixed-genre writing, including Nightshift Belonging to Lorca (2004) and Except by Falling, winner of the 2000 Pinyon Press Poetry Prize from Mesa State College. He contributes widely to literary publications and has traveled across North America and Europe to deliver his performance poetry. His notable awards include two PA Council for the Arts Fellowships, a Fulbright Lectureship, and nine nominations for the Pushcart Prize. Dougherty received his Bachelor of Fine Arts from Syracuse University, and has taught writing, rhetoric, and/or performance courses at Pennsylvania State University, Erie, Cleveland State University, and Case Western Reserve University. He was a featured poet in the 2003 Public Poetry Project of the Pennsylvania Center for the Book. As of this writing, he lives in Erie, Pennsylvania.

Sean Thomas Dougherty was born in 1965 in New York City and was raised by an African-American father and a mother of Moldovan-Jewish descent. His family moved to New Hampshire, but he continued to live in ethnically-mixed blue collar neighborhoods. He dropped out of Central High School in Manchester, New Hampshire, but the working class sounds and sights of those formative years would influence much of his later work.

During the next several years he worked at factories and warehouses, as well as undertaking a stint in teaching. He eventually returned to his schooling and graduated from Syracuse University in 1995 with a Bachelor of Fine Arts in Poetry. During this time he also discovered a love for performance poetry. According to The Syracuse Herald American, his team of Syracuse-area performance poets finished sixth out of 27 entrants at the 1995 National Poetry Slam Semifinals, and he individually finished eighth out of a pool of 127.

Dougherty taught at nearby Cazenovia College, a small liberal arts school, while he worked to earn his PhDin Composition and Cultural Rhetoric at Syracuse University. Before he could finish his dissertation, he moved to Erie, Pennsylvania, to take a lecturing position at the Pennsylvania State University at Erie.

Dougherty is the author or editor of multiple books of poetry and experimental mixed-genre literature, including the All I Ask for Is Longing: New and Selected Poems 1994-2014, Scything Grace (2013), Sasha Sings the Laundry on the Line (2010), and Except by Falling, winner of the 2000 Pinyon Press Poetry Prize, awarded by Mesa State College in recognition of exemplary small press poetry.

The laboring poor are not just transitional symbols for Dougherty, according to Joe Weil of Rattle magazine, they are his friends and family. They are the people he loves. "Sean Thomas Dougherty...is interested in the life of an outcast as a force of redemption and grace," wrote Weil. "He wants to get to the gist of suffering because he believes that the heart of Grace is somewhere in the wreckage." Dougherty writes of schoolyards, playgrounds, factory work, and the harassment of urban minorities by police. Not content to keep his writing grounded solely in his surroundings, he also injects historical context into the scenes.

In a review of his 2007 Broken Hallelujahs, Foreword magazine called Dougherty the master of momentum. He does not catch his breath and thus catches his reader right along with him. Acknowledged for his skill with the condensed form and his ability to unite a broad array of themes, Dougherty has garnered national recognition. Notable awards include the 2001 Syracuse Symposium Poetry Prize, the 2002 Francis Locke Memorial Poetry Prize from Bitter Oleander Press, two PA Council for the Arts Fellowships, a Fulbright Lectureship, and nine nominations for the Pushcart Prize, which is awarded annually to the most distinguished of small press and magazine publications.

His poem "Moon-Grief Utterance #2 (For SP)" was selected for publication by the Public Poetry Project of the Pennsylvania Center for the Book in 2003.

His style and cadence have also found a voice on the road. He has performed poetry at more than 100 colleges and festivals across North America and Europe, including at the Lollapalooza Music Festival in Chicago, the London Poetry Caf??, the Connecticut Poetry Festival, and the Bardroom Series in Budapest, Hungary. He has been invited to speak at Carnegie-Mellon University, Bucknell University, and other institutions of higher learning.

One of Dougherty's poems, "The Day Biggie Smalls Died," was featured on WXXI's 2013 Poetry Moments series. His collection, All You Ask for Is Longing: New and Selected Poems 1994-2014, is a compilation of his previous collections, and Publishers Weekly says of the book, ...readers in search ofsearch of socially conscious vigor, of street energy and 'something to hold onto,'may find that Dougherty is just what they need. Of his 2018 collection, The Second O of Sorrow, poet and Director of the Chatham University MFA program says, Every poem Sean Thomas Dougherty writes is holy, a psalm for the damned."

Sean Thomas Dougherty has taught writing, rhetoric, and/or performance courses at Pennsylvania State University — Erie, Cleveland State University, and Case Western Reserve University. As of this writing, he lives in Erie, Pennsylvania, works in a pool hall, and continues to write and participate in performance poetry and speaking engagements across the country. As of this writing, he resides in Erie, Pennsylvania, and works as a Med Tech, tours, hustles, and writes poems about stuff that happens in his city between the lake and the highway, and elsewhere, in our wrecked and gloriously ruined and beautiful American lives, according to his website.