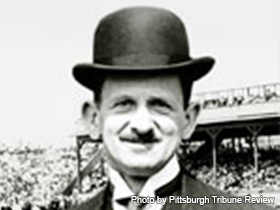 Long-time owner of the Pittsburgh Pirates, Barney Dreyfuss is the Father of the World Series.

Baseball executive Barney Dreyfuss was born in Germany in 1865. After emigrating to the United States, he settled in Kentucky, working in the distilling industry. Dreyfuss eventually became an owner of the Louisville Colonels, whom he merged with the of the Pittsburgh Pirates baseball team. He built the first triple tier major league baseball stadium (Forbes Field), and arranged the first World Series. Dreyfuss died in 1932 and was elected to the Baseball Hall of Fame in 2007.

Barney Dreyfuss was born in Freiberg, Germany on February 23, 1865. Dreyfuss was born to a father who was an American citizen, and when he was 16 they moved to the United States in order to avoid serving in the German Army. After moving to the U.S., they settled in Kentucky. Dreyfuss worked in a whiskey distillery for long hours during the day, and would study English along with other subjects into the wee hours of the morning. He was working so often and for such long amounts of time that he soon developed poor health. After seeing a doctor, it was suggested that he take up an outdoor activity in order to increase his dwindling health. Dreyfuss chose to take up baseball, a choice that would have a profound impact on the rest of his life. Soon after taking up baseball, he became the second baseman on a semi-pro team he organized.

Although Dreyfuss had a hand as a pioneer of professional football and helped, as co-owner, to lead the Pittsburgh Athletic Club to a Professional Football Championship in 1898, his major work was done in the area of Major League Baseball. In 1899, Dreyfuss acquired the Pittsburgh Pirates professional baseball team, after having previously coached the Louisville Colonels. When moving from the Colonels to the Pirates, Dreyfuss took with him three players who ended up being Hall of Famers: Honus Wagner, Fred Clarke, and Rube Waddell. With great moves like that, and the fact that he was so great at the scouting he chose to do himself instead of hiring someone to do, he is said to be "considered the best judge of baseball talent at the time" as Robert Slater stated in his book Great Jews in Sports. Not only was he a great judge of baseball talent, he was also great as an owner. In his 32 years as owner of the Pirates, Dreyfuss' clubs finished in the first division more than four times as many as times they finished in the second division and they also brought home six National League pennants between 1901 and 1927.

Under Dreyfuss, the Pirates also won the World Series twice in 1909 and 1925, a feat that would not have been possible if Dreyfuss had not arranged the first modern World Series in 1903. The first World Series was an eight game post-season tournament between the Pittsburgh Pirates (National League) and the Boston Americans. The Pirates may have lost the series, but it was the start of a prominent event in today's culture. Then in 1909, Dreyfuss built Forbes Field, the first modern triple tier major league baseball stadium. It had 25,000 seats that people told him he would never fill. Dreyfuss proved them wrong when on opening day, June 30, 1909, fans in the amount of 30,338 showed up to see the Pittsburgh Pirates play in the new stadium in the Oakland neighborhood. Dreyfuss was a very important figure in the history of not only the Pittsburgh Pirates, but also Major League Baseball as a whole.

Dreyfuss remained the owner of the Pirates until 1930 when he stepped down and handed the reins over to his son Sam. Then, in February of 1931, his son died unexpectedly of pneumonia and Barney Dreyfuss had to take over again as owner of the team. Dreyfuss never really recovered from the death of his son though, and about a year later, he too died of pneumonia. Posthumously, Dreyfuss was inducted as a member of the Jewish Sports Hall of Fame at the Wingate Institute in Israel. Robert Slater, in his book Great Jews in Sports, tells us that "at the time of his death the Sporting News called him 'the last of the generation of history makers.'"

In December 2007, the Veterans Committee voted Dreyfuss into the Baseball Hall of Fame. Lauding him as "an innovative team owner and policy maker," Dreyfuss' Hall of Fame plaque describes him as "one of the most highly regarded executives in organized baseball."