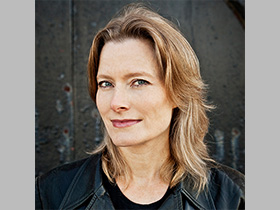 Jennifer Egan was born on September 6, 1962; though she was born in Chicago to father Donald and mother Kay, she moved to San Fransisco with her mother, where Egan spent her childhood. Egan attended The University of Pennsylvania, majoring in English literature. She then spent two years at St. John's College, Cambridge. While there, she travelled across Europe and turned those experiences into plots her novels. Egan eventually returned to the United States, finding her home in New York. She took on a series of odd jobs while she worked on her writing. Her short stories were first published in literary magazines; eventually she published novels such as The Invisible Circus and Look at Me. While writing novels, Egan is also a journalist for the New York Times Magazine. Her most recent novel, A Visit From the Goon Squad, won the 2011 Pulitzer Prize for fiction. Egan continues to write while residing in Brooklyn, New York with her husband and sons.

Jennifer Egan was born in Chicago on September 6, 1962 to father Donald and mother Kay. After her parents' divorce, Egan moved in San Fransisco with her mother. She studied English as The University of Pennsylvania and St. John's College, Cambridge in England. Egan travelled all across Europe, and through these experiences, Egan received inspiration for some of her first novels.

After studying in England, she moved to New York and took an a series of odd jobs before finally seeing her short stories in some prestigious magazines, including the New Yorker and GQ. In 1995, her first novel, The Invisible Circus, was published. The story follows Pheobe O'Connor's journey to Europe in order to find her entry to the transcendent world she believes her deceased sister, Faith, reached. The book received much praise from critics; Times Literary Supplement contributor Sarah Francis described the novel as a powerful and often disturbing study of the profound reverberations of death within a family. Francis went on to say that Egan "weaves a colorful web of repetitions and reworkings, further tangled by her creative use of metaphor and her eye for the smallest detail.

Soon after, she published a book a short stories, entitled Emerald City and Other Stories. Like her first novel, Egan received positive reactions from critics; Donna Seaman described the book in the New York Times Book Review as boldly modulated short stories, tales of displacement and blazing moments of truth. Claire Messud, writer for the Times Literary Supplement, called it a privilege to be taken with Egan on the world tour of her characters' lives...These stories are elegant, and full of insight.

Egan's next novel, Look at Me, stars Charlotte Swenson, a New York fashion model who, after a car accident, must have reconstructive work done to her face. When Swenson returns to New York with a completely new face, she meets a detective who is searching for her former boyfriend, a Middle Eastern character who has several hidden identities and plans to attack Manhattan. Coincidentally, the book was released in the same week that terrorists attacked the World Trade Center and the Pentagon, resulting in a flood of publicity. In the Los Angeles Times, Susan Salter Reynolds wrote: Look at Me is a complicated novel, sometimes too complicated, but the questions it raises are worth following a lifetime of labyrinths toward the answer. In Time, Laura Miller called the book an unlikely blend of tabloid luridness and brainy cultural commentary. Her next novel, The Keep, received equal praise; Elissa Schappell, of Vanity Fair, stated Egan's brilliance is in balancing the deliciously creepy elements of gothic-castle novels with the dead-on realism of the life of an incarcerated man.

Egan's most recent novel, entitled A Visit From the Goon Squad, won the 2011 Pulitzer Prize in Fiction. Each chapter of the book portrays a different set of characters: Bennie Salazar, who played bass as a teenager in unsuccessful punk bands, has morphed into a wealthy and miserable record producer in New York City; Sasha works as Bennie's assistant and near the end of the novel, she is living in the southwest with her twelve-year-old daughter Alison, who narrates her own chapter of the book in the form of a PowerPoint presentation. Other characters include Jules, a journalist (and brother of Bennie's wife) and LaDoll, a New York publicist whose orchestration of a gala event went horribly wrong, and is reduced to taking a job rehabilitating the image of an odious third-world dictator. Perhaps the novel's success revolves around Egan's experimental structure; in an interview with Lynn Neary on National Public Radio's Morning Edition, Egan said:

I loved the idea of trying to show the way that [the characters] lives entangle with each other and with other people over time, and to give the reader some of those kind of startling experiences of time passing that I think we all have in our own lives, especially after we hit forty or so, where suddenly people look really different, big things have happened to them, sometimes since you last saw them. I really wanted to capture the nature of those experiences.

On April 20, 2011, just two days after the Pulitzer win, Egan announced a deal withHBO for a television series adaptation of the novel. The network is working on the drafts of the series.

Egan is currently working on her next book, while residing in Brooklyn with her husband and two sons. While working on her novels, Egan wrote for the New York Times Magazine, which she still currently contributes to.