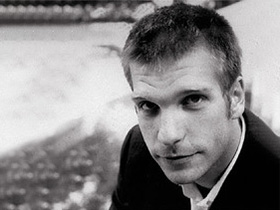 Tristan Egolf was born in 1971 in San Lorenzo del Escorial, Spain. His family moved around before settling in Lancaster, Pennsylvania. Egolf later moved to Philadelphia, Pennsylvania, and enrolled in Temple University, but then left to tour with a punk band. He traveled abroad and settled in Paris, France, writing his first novel Lord of the Barnyard (1998). After his novel's success, he returned to the United States and lived in New York. Egolf wrote his second novel Skirt and the Fiddle, which was published in 2002. He then returned to Lancaster where he settled permanently, started a family, and engaged in anti-government protests while he continued to write. In May 2005, Tristan Egolf took his own life.

Tristan Egolf was born on December 19, 1971, in San Lorenzo del Escorial, Spain. His father was a writer and artist, and his mother was a painter. Egolf's parents divorced, and he chose to live with his mother and stepfather, whose profession was a bicycle explorer. Egolf's family moved to Lancaster County, Pennsylvania, where he attended Hempfield High School. After graduation, he briefly attended Temple University in Philadelphia, Pennsylvania, where he studied for two semesters before dropping out. Shortly after, he joined a punk band and traveled around the country to Kentucky, Indiana, New Orleans, and then along the Northeast coast, absorbing inspiration for his later works. He was employed in several odd jobs throughout those years, including as a dog walker and a janitor.

After his band's cross-country tour, Egolf returned to Philadelphia, where the band was offered a recording contract. Figuring it would not lend him much time to write, Egolf rejected the offer and moved to Europe, which is where he planned to create his first novel. While abroad, he lived in Vienna, Amsterdam, London, and then eventually settled in Paris, where he finished the end of his first book, The Lord of the Barnyard (1998). After numerous rejections from American publishers, the French company Gallimad finally picked up the novel. This may have been due to the influence of a board member, French writer Patrick Modiano, who had become Egolf's mentor during his stay in Paris. In an interview with Brad Goldfarb, Egolf explained that during his last moments of writing "Patrick Modiano and his family were just wonderful to [him] during that time. At night they would invite [him] over for dinner, and [he'd] arrive looking like a zombie."

The novel's full title is The Lord of the Barnyard: Killing the Fatted Calf and Arming the Aware. It chronicles the fall and retribution of John, an ostracized farmer, who returns to the hometown that had wronged him years before. It became quite popular in Europe, meriting translation into several languages. The reviewers in the US.were impressed, comparing him to William Faulkner and remarking that he was a refreshing, although morbid, young up-and-coming writer. Although she had some qualms with the structure of the writing and dialogue, Laura Miller of the New York Times proclaimed Egolf as "...a new novelist whose prose hasn't been manicured to lifeless perfection by too many fiction-writing workshops."

After years on the move, Egolf decided to settle in New York City, where he planned on writing his next novel, Skirt and the Fiddle (2002). The theme of destruction is even more prevalent in this story of two friends. Charlie is a depressed violinist, and his partner in anarchy is Tinsel Greetz; they cause mayhem in city sewers as rat bounty hunters. This novel, although still well-regarded, did not match the style of his first. John Hartl of the New York Times exclaimed, it "...could use more of such flourishes." After its completion, Egolf moved back to his hometown in Lancaster County. He then met his girlfriend Kara Dimitris. During these years, Egolf became active in protesting against President George W. Bush and was arrested in July 2004 after reenacting the infamous Abu Ghraib prison scandal with a group known as the "Smoketown Six."

In 2004, Egolf and his girlfriend had a daughter named Orla Story Dimistris-Egolf. He began work on his next book Kornwolf (2005) and on a rock opera that was meant to involve Led Zepplin and John Fogerty. However, he never finished either project. On May 7, 2005, Tristan Egolf committed suicide using a shotgun in Lancaster, Pennsylvania. His family used his notes to finish Kornwolf, and it was published to satisfactory reviews. One by Barbara Hoffert stated that the story of a reporter tracking down an Amish werewolf was "...a bit of a mess: overwritten, overstated, leaping about as frantically as the werewolf itself."

However, according to Philadelphia Magazine's Jason Fagone, Kornwolf sold four times as many copies as Egolf's previous book. "'He had no gift for living," Christine Jordis, a Fiction Editor editor at Gallimard Publishing, told Fagone. 'He was so ill at ease with himself. He was so unhappy. He told me he literally couldn't live without writing. And that was true. A lot of writers say this. But with him, it was true. He was either drinking, writing or dying. And certainly no joy in him. Great torment.'"