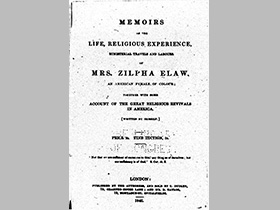 Born in 1790 and raised in Philadelphia, Elaw was a preacher and spiritual autobiographer. She wrote Memoirs of Life, Religious Experience, and Ministerial Travels and Labours of Mrs. Zilpha Elaw, an American Female of Color.

Zilpha Elaw was born outside of Philadelphia in 1790 to a free black family. At an early age, she reported seeing a vision of Jesus, and as a result, joined the Methodist Episcopal Church. Later in life she decided to become a preacher and evangelist. She traveled throughout the northeastern and mid-Atlantic regions of the United States and would later travel to England preaching the word of God. Elaw would preach in England until her death, which was believed to have been in 1845. Recounting her great journey during a time when women of color were rarely heeded, her memoirs were published shortly after her death.

Zilpha Elaw, one of the first outspoken black women in the United States, was born outside of Philadelphia to a free black and deeply religious family. Following the death of her mother, when Zilpha was only 12 years old, her father put her into service with a Quaker family. Zilpha resented the quiet, reserved religious practices of the Quaker family and joined the Methodist Episcopal Church in 1808 after seeing visions of Jesus Christ. At the age of 18 she left the Quaker family and married Joseph Elaw in 1810.

The strained relationship between Zilpha and Joseph was evident from the beginning, a result of Zilpha's zealous attraction to Jesus Christ. Joseph and his wife moved to Burlington, New Jersey in 1811 so Joseph could continue his employment in the textile industry. Zilpha gave birth to a daughter the following year. Elaw attended her first week-long revival camp in 1817. At the revival meetings, hundreds of individuals camped out and engaged in a program of activities designed to bring the group closer to God. It was during this first meeting that Elaw fell into a trance, after which she declared that God had sanctified her soul. Following the trance, she gave her first public speech. This first speaking engagement set the stage for the remainder of Elaw's life as an evangelist.

In 1819, at another revival meeting, she was again presented with the opportunity to speak, receiving words of encouragement from a number of Christian women. In the eyes of the revival camp attendees, Zilpha's trances and subsequent speeches confirmed her divine purpose to spread the word of God. Elaw slowly amassed a following of individuals, both black and white, Methodist and non-Methodist, in southeastern Pennsylvania and western New Jersey. Fearing public humiliation, Elaw's husband attempted to stop his wife from continuing her practices, but to no avail; Elaw declared that she was simply carrying out the will of God. After Joseph Elaw's death in 1823, Zilpha hired herself and her daughter out as domestics and opened a school for black children in Burlington. Up until that time, Burlington only allowed white children to attend public school. Despite the new school providing a place for the black children of Burlington, Elaw's convictions to continue preaching caused her to close the school after two years and place her daughter with a relative.

Returning to Philadelphia, the region of her birth, and renouncing her Methodist affiliation out of a belief that her words were for people of all denominations, Elaw set her own itinerary. She traveled to states throughout the northeast and mid-Atlantic, her inner spirit providing her with the material she delivered daily to the public. In 1828 she decided to spread her message to slave-holding states, including Maryland and Virginia. In doing so, she risked being arrested, kidnapped, or even sold into slavery. As an evangelist in slave-holding states, Elaw visited parts of Baltimore and Annapolis, Maryland; Alexandria, Virginia; and Washington D.C., preaching her words to both whites and blacks, some free, some not.

After returning to Burlington, Elaw revisited many areas from her past and preached alongside another famous black evangelist, Jarena Lee, in western Pennsylvania. Having traveled up and down the East Coast of the United States, Zilpha spoke in her memoirs of being authorized by God to take her beliefs across the Atlantic. Elaw sailed for England in 1840. According to her memoirs, she preached over 1,000 sermons in and around central England, facing harsh criticism from religious figures who believed that a woman should not preach the word of God. It is believed that Elaw was to return to the United States in 1845; however there is no official documentation or first-hand accounts detailing her cause of death or final resting place. Elaw's memoir, Memoirs of the Life, Religious Experience, Ministerial Travels, and Labours of Mrs. Zilpha Elaw, an American Female of Colour, was self-published in 1846, revealing the life long journey of the great Pennsylvanian.