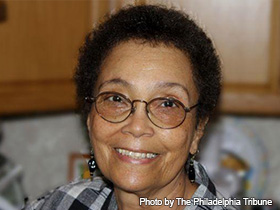 Born and raised in Philadelphia in 1938, Muriel Feelings attended the Philadelphia Museum School of Art and the Los Angeles State College. Soon after, she began teaching Spanish and art in elementary and secondary schools in Philadelphia and New York. While in New York, Feelings met Malcolm X and was moved to serve in Africa and develop literature for African-American children. Upon moving to Uganda in 1966, Feelings taught art at a boys' school in Kampala, Uganda and found information that inspired her to write Afro-centric literature for American children. After marrying Tom Feelings in 1969, the two worked together to create books focusing on Africa's cultures and landscapes. Feelings died on Thursday, September 29, 2011.

Muriel Feelings was born Muriel Grey on July 31, 1938, in Philadelphia, Pennsylvania, to a mother and stepfather who valued and appreciated both art and education. From an early age, Feelings was influenced by her mother, who was not formally educated, but who became self-taught through the books that filled their home. After finishing high school, Feelings attended The University of the Arts in Philadelphia (formerly the Philadelphia Museum School of Art) and, after a year, moved to California with her mother and sister. While in California, she continued her education at California State University at Los Angeles (formerly Los Angeles State College), graduating with a bachelor's degree in art with a Spanish and education minor.

After graduation, Feelings planned to do charitable work in Africa at some point, but started teaching at a junior high school in Philadelphia instead. She then moved to New York and taught in the city's public school system for many years. At a time of political upheaval in the United States, Feelings wanted to serve in Africa, away from political entities. While in New York, Feelings interest in traveling to Africa intensified after meeting United Nations workers associated with a mission to Uganda, and also after meeting black nationalist Malcolm X. Embracing his post-Nation of Islam message, Feelings committed herself to the Organization of Afro-American Unity, which worked to unite and fight against white oppression. It was through Malcolm X that Feelings began to consider how critical it was for the black American culture to embrace their heritage, and she soon served in Africa.

Feelings began to teach art at a boys' high school in Kampala, Uganda from 1966-1968. She learned from her students there and drew inspiration for her books from her surroundings. By traveling extensively throughout Africa, Feelings became impressed and immersed with the culture and inspired by her heritage. Upon moving back to New York in 1968, Feelings rekindled a romantic friendship with Tom Feelings, and the two were wed in 1969. It was Tom's suggestion that Feelings write a children's book, which he volunteered to illustrate. Influenced by time spent in Kenya, Feelings penned her first book, Zamani Goes to Market in 1970. It was the title of this book that also lent its name to the couple's first child, Zamini, which is a Swahili word meaning "infinite."

After the birth of their son, the Feelings moved to the South American nation of Guyana. After becoming interested with the Guyanan government, the Guyanese Ministry of Education asked Tom to train artists in book illustrations, and Muriel to train teachers. It was in Guyana that Feelings and her husband collaborated on their second book, Moja Means One: A Swahili Counting Book. The book was widely accepted by critics, and went on to win the Randolph Caldecott Medal in 1972. After moving back to New York, the Feelings had another son, Kamili. In 1974, they published another children's literature book, Jambo Means Hello: A Swahili Alphabet Book, which was also reviewed very well. It appeared on many Best Books and Recommended Literature lists. Both Moja and Jambo were Caldecott Honor books, and both received awards from the Pennsylvania State Library Association (PSLA) and the American Library Association Notable Books in 1972.

After a divorce in 1974, Feelings retreated from the public eye and happily slipped into retirement. She busied herself working on programs that exposed new works by black artists and writers to the public and conducted workshops on children's literature and Africa culture and language. Muriel Feelings died on Thursday, September 29, 2011, in the company of her two sons.