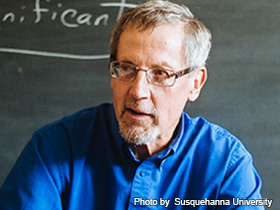 Born in Pittsburgh on July 7, 1945, Gary Fincke has authored many works of fiction, nonfiction, and poetry. His work has earned him notable recognition, including seven fellowships from the Pennsylvania Council on the Arts, two Pushcart Prizes, and book prizes such as the Flannery O'Connor Prize for Short Fiction, the Wheeler Prize for Poetry, and the Robert C. Jones Prize for Creative Nonfiction. Fincke was the Charles B. Degenstein Professor of English and Creative Writing and Director of The Writers Institute at Susquehanna University before he retired in December 2016. At the time of this writing, he lives with his wife, Elizabeth, in Selinsgrove, Pennsylvania.

Gary Fincke was born to William Fincke and Ruth Lang in Pittsburgh on July 7, 1945, and grew up in Etna, Pennsylvania, in a blue-collar neighborhood. His mother worked as a clerk and his father headed their family-run bakery, while Fincke and his older sister Judy attended Wilson Street Elementary School, and then later Shaler Area High School. He and his sister were first-generation college students when they arrived at Thiel College. The experiences Fincke had growing up in a Pennsylvanian steel-mill town would later deeply influence the content and style of his writings.

He began his studies in pre-med but became increasingly interested in the arts, particularly writing poems and short stories. Fincke eventually decided to further pursue English and literature, despite disapproval from his family, and especially his father. In addition to his academic pursuits, Fincke also exercised his athletic prowess, taking part in varsity basketball and tennis.

After graduating from Thiel College with a BA in 1967, Fincke went on to earn his MA from Miami University in 1969. During his studies at Thiel, he had met Elizabeth Locker, a classmate who would later become an elementary school teacher, and the two married on August 17, 1968. The pair would have three children over the years: Derek, Shannon, and Aaron. All three of his children would go on to cultivate artistic careers.

From 1968 to 1969, Fincke taught English at the Freedom Area High School in Freedom, Pennsylvania. He then taught English at Pennsylvania State University (Beaver) while also pursuing a PhD from Kent State University, which he earned in 1974. Fincke was on campus (though not protesting) during the infamous Kent State National Guard shootings in response to Vietnam War protestors. Fincke often describes this experience as transformative for him, pushing him into a more liberal, more compassionate, and more questioning mindset.

Fincke continued teaching as an English Instructor at the Pennsylvania State University Beaver Campus in Monaca until 1975, followed by five years as the Chair of the English Department at LeRoy Central School in LeRoy, New York. After completing his PhD, Fincke kicked off his literary career with the publication of two poetry chapbooks: Breath (1984) and The Coat in the Heart (1985). He was an entirely self-taught poet, though he took great inspiration from other poets like Philip Levine.

From 1980 to 2016, Fincke taught at Susquehanna University, where he eventually served as the Charles B. Degenstein Professor of English and Creative Writing. Fincke created the university’s first creative writing major program in 1996, a program that is now nationally recognized for its excellence. Fincke founded The Writers Institute at Susquehanna University in 1993 and directed it until 2014. The program supports and funds creative writing endeavors at the university, including literary magazines, workshops, and the Seavey Reading Series, a year-long program of visiting writers and agents. During this time, he also directed four annually published magazines, including The Susquehanna Review, Rivercraft Magazine, Essay, and Apprentice Writer. Fincke also coached Susquehanna’s varsity men’s tennis team for 21 years. In 2016, Fincke retired from his position at the university to continue writing on his own full-time.

Fincke has published dozens of books—including works of fiction, nonfiction, and poetry—and has received many notable acknowledgments for his work, such as the PEN Syndicated Fiction Prize, two Pushcart Prizes, seven national books prizes, and seven fellowships for Creative Writing from the Pennsylvania Council on the Arts, among many other awards.

Fincke’s writing is best characterized by its conversational tone and down-to-earth subject matter. He often incorporates realistic dialogue and scenarios in his poetry, artfully revealing the beauty in these moments. His subjects range from everyday people to his own first-person perspective to stranger characters, such as Ruby, the painting elephant from the Phoenix Zoo.

Fincke's essay "The Canals of Mars" was awarded a Pushcart Prize and was subsequently reprinted in The Pushcart Essays, which featured the best essays from the first twenty-five editions of the Pushcart Prize. His story, "The Blazer Sestina" (2013) won the George Garrett Fiction Prize, and other recent stories have been cited in Best American Stories, the O. Henry Awards, and Pushcart Prize volumes. His essay "After the Three-Moon Era" was chosen to appear in Best American Essays 2020. In 2001, his poem “Ants” was selected for publication by the Pennsylvania Center for the Book Public Poetry Project.

At the time of this writing, Gary Fincke lives with his wife, Elizabeth, in Selinsgrove, Pennsylvania, where he continues to publish innovative essays and poetry collections.