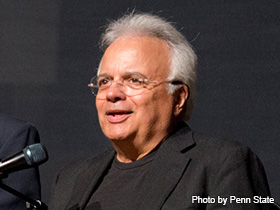 Finestra has been involved as both a writer and a producer for some of TV's most famous sitcoms, including The Cosby Show and Home Improvement.

Harrisburg native Carmen Finestra has achieved a great deal of success in the television industry since his beginnings at Pennsylvania State University (Penn State). He went on to work on Broadway, perform stand-up, and to write for and produce TV series. Finestra later became an executive producer and co-owner of the Wind Dancer Production Group, most famous for the television program Home Improvement. He was named a Penn State Distinguished Alumni in 1998, and his contributions to the university supported the construction of the Finestra Digital Editing Lab on campus.

Carmen Finestra was born in Harrisburg, Pennsylvania, in 1947 to Italian immigrant parents.

Beginning his college career at St. Meinrad Seminary in Indiana, Finestra studied to be a priest for two years before transferring to the Pennsylvania State University (Penn State). He graduated from Penn State in 1971 with a bachelor's degree in general arts and sciences.

After graduating, Finestra worked with the Harrisburg Community Theatre, where he developed his acting and writing talents. Finestra took great pleasure in writing spoofs of the shows performed at the Theatre, and he eventually moved to New York City where he began doing stand-up comedy as well as acting. He performed off-Broadway for three seasons with the Jean Cocteau Repertory Company. Finestra also supported himself through an assortment of jobs. Working as a "gofer" for Broadway producer Joe Cates, Finestra received a job writing for a Johnny Cash summer series when Cates recognized Finestra's flair for writing humorous memos. Comedian Steve Martin, who also worked on the Cash show, hired Finestra to write material for nightclub and variety shows.

Finestra went on to write for several television series, including Chico and the Man, Love Boat, Angie, She Na Na, and variety specials with Martin Mull and Paul Reubens. His work as a creative consultant on Punky Brewster led to his involvement as a writer for Bill Cosby.

Finestra began writing for The Cosby Show in 1984, serving as the show's supervising producer until 1990. He also wrote for the Cosby show spin-off A Different World. Helping to create the popular sitcom Home Improvement in 1991, Finestra began working as a writer and co-executive producer for the show until its 1999 series finale. Finestra also became an executive producer and co-owner of the Wind Dancer Production Group.

Finestra's early material written for Steve Martin received two Writers' Guild awards. He received a third Writers' Guild award for his work on Time Warner Presents the Earth Day Special. His work on The Cosby Show resulted in three Emmy Award nominations, one for outstanding writing in a comedy series in 1986, and one in both 1986 and 1987 for outstanding comedy series. He also shares with other writers from the Cosby show two Humanitas Prizes and a Peabody Award for outstanding achievement in television writing. Finestra's work on Home Improvement resulted in nominations for three Emmies and two Golden Globes. Finestra was made a Penn State Alumni Fellow in 1991, and a Distinguished Alumnus in 1998. He became a member of the University's President's Club in 1991.

The Penn State Finestra Digital Editing Lab, described as a state-of-the-art facility for video post-production on its web site, was funded by Carmen Finestra's contributions to the university.