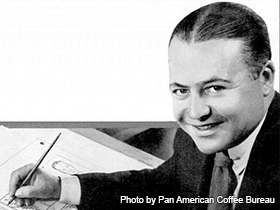 Hammond Edward Fisher was born in Wilkes-Barre, Pennsylvania, on or around September 24, 1900. Fisher was known widely for his Joe Palooka comic, featured in hundreds of newspapers, and later in comic books and movie theaters. Although Fisher died on September 7, 1955, in his New York studio, his comic continued from the debut in 1930 until 1984 under Mo Leff and Tony DiPreta.

Hammond Edward Fisher, also known as "Ham" Fisher, was born on September 24, 1900, although some sources list 1901 for the year. Fisher was an American comic strip creator who began his career at age 19 as a professional sports reporter. It was during this job that Fisher was acquainted with a good-natured yet not-very-bright boxer. This man inspired Fisher to create his own daily comic strip.

Soon after, Fisher had created several sample strips and a storyline about a good-hearted, feebleminded boxer of his own, named Joe Palooka. Eventually the name "Palooka" became a word to describe an athlete, especially a boxer, who lacks ability, experience, or competitive spirit. Fisher introduced his new Palooka boxer to several comic syndicates, but it took nearly a decade for the comic to finally get a spot in the papers.

In 1929, Fisher was working as a salesmen for the McNaught Syndicate, traveling through towns in an attempt to interest editors in the Syndicate's comic entitled Dixie Dugan. During this trip, he also attempted to sell them his own comic strip. Joe Palooka featured a heavyweight boxing champion, for which the comic was named, who goes on several adventures throughout the strip. The low-key adventures through the comic's mountainous hillbilly setting were made more interesting by the supporting cast, led by a smiling blacksmith named Humphrey Pennyworth. Fisher managed to sign nearly two dozen papers to his Palooka comic. This was enough to convince the Syndicate manager to give the comic a try. In April of 1930, the comic was officially born, and it quickly became one of the most successful sports comic strips of all time.

Although the comic was now launched, Fisher was not an extremely talented illustrator or writer. The creation of his comic strip greatly relied on the talent of his assistants, such as Alfred Caplin, who introduced a character named Big Leviticus into the comic. Caplin later left the comic strip to begin his own comic, Li'l Abner, which had a similar setting to Joe Palooka. Fisher continued to use Caplin's character after he left, and Fisher claimed his comic to be the first to use the hillbilly mountain setting, which Caplin also used in his Li'l Abner comic.

In addition to this, Alfred Caplin complained about Fisher paying him less-than-meager wages during the depression era. Fisher later accused Caplin of using obscenities in his Li'l Abner comic. During the case, it was proven that the obscenities in the evidence was fabricated by Fisher to use against Caplin. From this, a long feud began between the two that would last Fisher's entire life.

Years after Palooka's debut in the newspapers, the characters from the comic began appearing in other media as well. In 1934, Palooka, the first movie based on the comic characters, was created and did quite well for a low-budget film. This movie inspired eleven sequels which continued to come out into the 1950s. The strip was also published in comic book form during 1945 to 1961, making it the first newspaper comic licensed by Harvey Comics. Harvey Comics also featured several of the supporting characters from Joe Palooka into their own titles as well, including Humphrey from 1948 to 1952 and Little Max from 1949 to 1961.

In Fisher's feud with Alfred Caplin, he managed to hire away Mo Leff in the mid-1930s, who would be come Fisher's longest lasting assistant. On September 7, 1955, Fisher left several notes about health issues he was having and committed suicide in his studio in New York. It was Leff who continued his comic for four years after his death. In 1959, Tony DiPreta took Leff's place, who continued the comic for several decades after Fisher's death. The last Joe Palooka comic was published in newspapers on November 24, 1984.

At the peak of the comic strip, Palooka had a spot in more than 900 daily newspapers. In 1947, there were nearly 50 million readers of the comic. During this time however, storyline comics were losing popularity to joke-of-the-day comic strips. Fisher remained dedicated, however, and even in his last years would ask newspaper editors, "How's Joe doing in your paper?" In the last 1984 comic, Joe Palooka retired to Wilkes-Barre, Pennsylvania, Ham Fisher's home town. Just south of Wilkes-Barre, on the way to the town of Mountain Top, lies Joe Palooka Mountain, named after the comic character by the Mayor of Wilkes-Barre at the time.