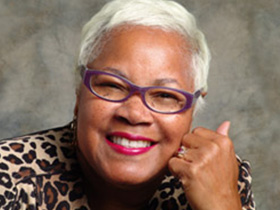 Sharon G. Flake grew up in Philadelphia, attended the University of Pittsburgh, and then worked as a social worker for fifteen years. She was insecure about her writing abilities, but for more than thirty years she did some freelance that did not get published. Her first book, The Skin I'm In (1998), was accepted by the first publisher it was sent to. Since, she has published many young adult (YA) titles, including You Don't Even Know Me: Stories and Poems About Boys (2010), Pinned (2014), and Unstoppable Octobia May (2015). Each of Flake's works focuses on honest, struggling, minority adolescents. Flake visits libraries and schools hoping to inspire impoverished adolescents.

Sharon G. Flake was born on December 24, 1956, in Northern Philadelphia, Pennsylvania. According to Andrea Sachs in Time, she was born in "an area with its share of poverty and crime." Flake grew up in a tight-knit family with six children, and her parents have been married for 59 years and continue to live in Northern Philadelphia. Flake's mother scrubbed floors for a living, and her father was an intellectual. After growing up in Philadelphia, Flake began attending the University of Pittsburgh, majoring in medicine. After taking several medical classes, the curriculum was too difficult, causing Flake to switch her major three times. Finally, reviewing all of her grades, Flake found that she got the best grades in English, so she decided to complete her B.A. in English.

During college, she was offered an internship with a local newspaper; they contacted her three times, but she never showed up for work. Post-graduation, Flake's insecurity remained, and she decided to work in a social services agency. After several years as a houseparent, helping youth in foster care, Flake joined a writing group in a Pittsburgh bookstore.

The first publisher to whom Flake took her manuscript of The Skin I'm In signed her. The Skin I'm In is the story of Maleeka Madison, a dark-skinned middle school student who endures racism and bullying on a daily basis. Flake describes her own adolescence, and it is very similar to the story of Maleeka. Within the novel, The Skin I'm In, Maleeka uses writing as a method of working through her heartache, and expressing herself, much like Flake's utilization of writing to discuss her adolescence.

After the success of The Skin I'm In, Flake continued to create stories about real-life characters, with colloquial language and realistic situations. Chrystal Carr Jeter, the youth services manager in Cleveland Public Libraries, describes Flake's writing: "...it's not like an adult trying to write about teen culture. It's like her books have been written by one of their peers. She captures who they are, where they are and why they are there." Flake's books have become extremely popular with middle- and high-school students; in many high schools, some of her earlier works have become required reading. Her ability to relate to and understand the adolescent culture, while embedding wisdom about the possibilities of a better future, make Flake one of the most popular youth authors.

Each of Flake's stories involves minority adolescents struggling with realistic problems, as in Money Hungry, Flake's second novel. Raspberry Hill is the main character of Money Hungry; she lives in the projects with her mother, and hoards money with the hope that as soon as enough money is accumulated, her mother and she can obtain better housing. Within the story, simultaneously the apartment is robbed and Raspberry is accused of stealing money from an elderly care center. The stress of these situations causes Raspberry's mom to throw Raspberry's stash of money out the window. While moments of Money Hungry are a little intense, overall Raspberry's story is a realistic, heart-warming portrayal of an individual's struggles with poverty.

Begging for Change is the sequel to Money Hungry, and continues to follow Raspberry and her financial endeavors, along with her feelings that security rests solely in an individual's financial status. After her mother is brutally attacked, Raspberry steals cash from Zora, her friend and the daughter of her mother's boyfriend. According to Karen Coats, a high school media specialist, "Flake's strength in these two books lies in developing genuine, believable adults and children who continue to grow and change through their relationships with each other." Once again, Flake's ability to create characters and neighborhoods that are brutally honest allow the reader to remain interested and empathize with the characters.

Flake chose to add variety to her writing style and created ten short stories all loosely based on the theme of adolescent romance. Every character within these short stories was African American. There are a variety of romantic situations presented: one girl likes a boy currently in a relationship; one likes one she can never actually date; another story involves teen pregnancy; one focuses on a class experiment on respect and relationships. According to Lee Gordon, a librarian, "[Flake] can capture the rhythm of the street and teen culture without needing to add profanity or graphic sex; that makes this book instantly usable in a variety of situations in school beyond its immediate appeal to teens seeking romance." Flake's novels have become required reading in many school districts.

Another more recent book by Flake is The Broken Bike Boy and Queen of 33rd Street, but before creating Queen Marie Rosseau's story Flake wrote Bang!, a story that follows Mann, whose brother was shot while Mann was just thirteen-years-old. The story picks up two years later, as the family reacts to the crisis in a variety of ways - the mother cries, the father rages, and Mann begins down the path of violence. Mann and Kee-lee are left in the woods by Mann's father in hopes that attempting to find a way home would teach them responsibility and discipline. Granted this plan of Mann's father in all reality backfires, but overall it is extremely effective. Heather Hepler, an instructor at the University of Maine at Machias, says of Flake's Bang!, "powerful and arresting, the narrative resonates with a truth that makes the telling of this table all the more tragic. Unfortunately, the voice of Mann is uneven, making him difficult to follow." All in all, this graphically violent novel exposes the realistic and horrific environment forced upon the impoverished.

When Flake spoke of her writing process in a live-interview with the New York Public Library, she said that it does not include much research; rather she attempts to "write from the gut, and feel what other people (my character) might be feeling." This empathetic approach to characterization is quite obvious in all of Flake's characters. She allows them to direct the trajectory of the story, and as a result of that they are more realistic and appealing to readers.

Sharon G. Flake thrives on visiting schools and public libraries throughout the northeast, talking with adolescents about her past and the possibility of their future. She spoke of what she hopes to convey to adolescents, "I want kids to know you don't have to be perfect to do something you want to do. I wasn't good at spelling or grammar, but my writing just comes from my gut." Her honest and hopeful approach appeals to adolescents in their stage of uncertainty and self-doubt.

She continues to visit schools and discuss her books and opportunities available to African-American, and other minority, adolescents. Flake has been living in Pittsburgh for the last twenty-nine years, living with her sole daughter, Brittney, who is now twenty-years-old.

Just publishing her most recent books, The Broken Bike Boy and Queen of 33rd Street and You Don't Even Know Me, Flake is continuing to write and expand her advocacy for the trials and tribulations of inner-city youth. Flake continues to visit local schools and libraries, talking to students about her life and giving them hope for a better future.