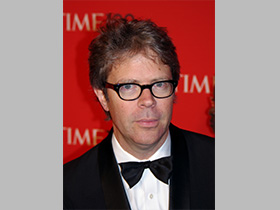 Swarthmore alumnus Jonathan Franzen is the author of numerous essays and novels, including The Corrections and How To Be Alone.

Author Jonathan Franzen was born in 1959 in Chicago and raised in Missouri. He majored in German at Swarthmore College, then began writing and working in Harvard's geology department. His first two books, The Twenty-Seventh City and Strong Motion, were essentially stage-setters for 2001's The Corrections. For this third novel, Franzen won the National Book Award, and was invited to be featured Oprah's Book Club. How to Be Alone, a collection of essays, came out in 2002. Franzen then wrote a memoir called The Discomfort Zone and published a translation of a German play called Spring Awakening. His novel Freedom came out in 2010. Franzen lives in New York City and writes for The New Yorker.

Jonathan Franzen was born August 17, 1959 in Chicago, Illinois. His parents, civil engineer Earl and homemaker Irene, were from Minnesota but moved to Webster Groves, a suburb of St. Louis, Missouri, to raise their only child. After gradutating from high school, he attended Swarthmore College in Pennsylvania. He received a Fulbright scholarship to study in Germany, and he graduated in 1981 with a degree in German. Shortly after, he moved to a Boston suburb with his wife, aspiring novelist Valerie Cornell, and got a job in Harvard's geology department.

At the age of 29, Franzen published his first novel, The Twenty-Seventh City. It was the story of a female police chief in St. Louis trying to make it big in real estate under the guise of reuniting the twenty-seventh biggest American city. The novel was not widely read, but some critics noticed its author's potential. Publisher's Weekly wrote on Franzen's first novel that "his imagination is prodigious, his scope sweeping; but in the end, he loses control of his material."

Franzen spent the next few years working on his second novel, Strong Motion. He completed it in Yaddo, a New York artists' colony, and published it in 1992. Strong Motion outlines a tumultuous story centered on Louis Holland, a 23-year-old radio employee in Boston. Louis' mother inherits $22 million, but the money gets tied up in a company that is polluting wells with toxic waste. Simultaneously, Boston is being inflicted with earthquakes. Louis' seismologist girlfriend begins to suspect that the toxic waste is causing the convulsions, but she gets caught up in a scandal over comments she made about an anti-abortion leader. "Strong Motion" referred to both earthquakes and the troubles of a dysfunctional family—themes taken straight from Franzen's own experience both in the geology lab at Harvard and in his own family.

Franzen's father suffered from Alzheimer's Disease and slight hallucinations. On NPR's Fresh Air, Franzen said that his "straight-laced" father took offense to some aspects of his work, including what he saw as criticisms of religion. His mother seemed more accepting of his ideas, but Franzen said that she had "long since learned how to read my books without reading them, and how to skim the cream off the experience of my being a writer without having to actually down the milk underneath it."

In 1996, Franzen garnered notoriety for a 15,000-word essay he wrote for Harper's Magazine, "Perchance to Dream." The essay discussed the questionable relevance of the novelist to modern society, and argued that America only had room for socially committed novels with compelling, Hollywood-esque characters. "Perchance to Dream" would be widely discussed in reviews of Franzen's 2001 novel The Corrections. Salon.com said shortly after the novel's debut that The Corrections "is bound to be viewed by some readers as Franzen's other shoe finally hitting the floor, five years later." "Perchance to Dream" laid out a mission statement, and The Corrections accomplished it.

The Corrections quickly became Franzen's best known work. It told the story of an elderly couple trying to gather their distant children for one last family Christmas. Following its publication, Franzen won the National Book Award and the James Tait Memorial Prize for fiction, and became a Pulitzer Prize finalist. Lev Grossman, writing for TIME, called The Corrections "a symphony of Midwestern, middle-class mental suffering that conveys depression and anxiety more entertainingly and eloquently than almost any book I've ever read." Barbara Bogaev of NPR's Fresh Air said that it was "One of those rare books which is both a literary and a popular success."

The Corrections was chosen for inclusion in Oprah Winfrey's Book Club for 2001, but Franzen had mixed feelings. He told NPR that he worried the Oprah sticker might deter male readers, and explained to the newspaper The Oregonian that the book was "my creation, and I didn't want that logo of corporate ownership on it." In an interview with Powells.com, he called some of Winfrey's book picks "schmaltzy." On her show, Winfrey said that Franzen seemed "uncomfortable and conflicted" about the distinction, and revoked her invitation. This incident ended up giving more attention to The Corrections than the Book Club inclusion likely would have, but it also established Franzen's reputation as an elitist snob among many critics. In an article for NYU's Washington Square News, Shazad Akhtar called Franzen a "snob," a "hypocrite," and an "elitist" with a "certain strain of sexism running through his beryl-blue blood."

In 2002, Franzen published a collection of fourteen essays under the tile How to Be Alone. Franzen called How to Be Alone an exploration of "the problem of preserving individuality and complexity in a noisy and distracting mass culture." The release republished the famous 1996 Harper's essay "Perchance to Dream."

2006 saw the release of a memoir, The Discomfort Zone: A Personal History. This memoir discusses the effects of Franzen's Missouri childhood on his creativity, his mother's death, his bird-watching, and his marriage. The cover image of the hardback edition is a diagram of a heart, portioned out into labeled areas such as "Province of Deep Thought" and "Land of Living It Up"—an illustration from McCall's Magazine entitled "Map of a Man's Heart."

In 2007, Franzen published a German-to-English translation of Frank Wedekind's play Spring Awakening. He had done the translation for $50 in 1986 for Swarthmore's theatre department, but had never published it. The play follows four teenagers through their first experiences with sexual awareness, and focuses on the complexities of desire, homosexuality, abortion, and suicide. Playwright Christopher Shinn wrote that "Spring Awakening is the best play ever written about teenagers, and Jonathan Franzen's fraught yet buoyant translation is the best I've ever read."

In 2010, Franzen released his fourth novel, Freedom. Freedom followed the lives of the Berglunds, a liberal middle-class family in St. Paul, Minnesota. Like The Corrections, the novel primarily focused on the troubled relationships of the family. The release of a new book gave Franzen a chance to patch things up with Oprah Winfrey. On December 6, 2010, Franzen went on the Oprah show to promote the book as an Oprah Book Club selection. The two openly talked about the conflict of 2001, which served as a jumping-off point for a discussion of the role of the author in modern America's pop culture.

Franzen's writing has been the focus of many contemporary cultural critics. In a spot on The Corrections for the list of "100 best novels from 1923 to the present," TIME says that "Franzen's literary heroes are the masters of the paranoid, postmodern novel—William Gaddis, Thomas Pynchon, Don DeLillo." Stephen J. Burn's book Jonathan Franzen at the End of Postmodernism argues that Franzen offers an example of where American fiction is headed after post-modernism (what Burn and other critics call "post-postmodernism").

Franzen's writing is noted for its versatility and emphasis on distinct tone. When asked by bigthink.com "How do you write?" Franzen responded "It's always about tone. And if the tone isn't there, then there is no writing." His use of multiple narrators and varied tones in the same work reflects what he calls "the essential blurriness of my own nature—I don't seem to be able to be the same person on any two consecutive days."

Franzen now lives on the Upper East Side of New York City, and writes for The New Yorker.