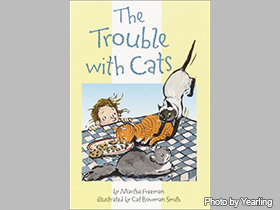 Children's novelist Martha Freeman (The Trouble With Cats, The Year My Parents Ruined My Life) was once a resident of State College, Pennsylvania.

Martha Freeman is the author of children's book, such as Fourth Grade Weirdo (2001) and The Year My Parents Ruined My Life (1997), which is set in the fictional Belletoona, likely a combination of Bellefonte and Altoona, neighboring towns to State College, Pennsylvania, where she was once a longtime resident. Read more here.

If someone would have told Martha Freeman she would be a best-selling children's author, she would have laughed. Martha Freeman was born on February 25, 1956, in Whittier, California. She was born to the fine artist, Leslie F. Freeman, and his wife Barbara (Parks) Freeman. Freeman lived an average childhood which took her traveling all over the world and going through experiences that would later be used in her books. She graduated high school from Glendale High, the same high school that John Wayne attended. Until she came along, he had always been the most famous graduate of Glendale High but she quickly stole his title away. In 1978, Freeman graduated from Stanford University at which she earned a degree in History. After graduating, Freeman held many different jobs. These jobs included: newspaper reporter, copy editor, substitute teacher, college lecturer, advertising copywriter, and freelance magazine writer. Finally, at the age of 38, she found a job she truly loved, a children's author. In between all of these jobs, she married Russell Frank and had three children named Sylvie, Rosa and Ethan. Frank got a job as a professor at Penn State University which brought them to State College in 1995.

Freeman, as previously mentioned, did not get a start on her literary career until she was 38-years-old. Since deciding to become a children's author, she has published nine books. Her first book was Stink Bomb Mom (1996). Unfortunately, this book is now out of print. After writing her first book, she has continued to write a novel each year. Her most profound work was her second book, The Year My Parents Ruined My Life (1997). This book captivates young readers because a lot of children experience growing up in one town and moving to another. The book is written primarily about Freeman's children, who grew up in California and were brought to State College. She names the town Belletoona, which sounds awfully similar to State College's neighbors, Bellefonte and Altoona. This book uses humor to get the message across that life can be tough but in the end everything will work out.

Another book that captured a lot of people's attention is Fourth Grade Weirdo (1999). This book takes a character that everyone can relate to. Dexter, the main character, is a complete outsider who is used to his same routine. But by going on a mysterious hunt to find a crook, he grows up into a character filled with all different emotions and actions. Again, Freeman uses humor to capture the attention of her younger readers.

An important attribute that Martha Freeman brings to the table as a children's author is that she likes to use the same characters and continue a storyline. In The Trouble with Cats (2000) and The Trouble with Babies (2002), Freeman uses the main character Holly and her family to give a funny way of showing how to go through changes. Holly is put into a situation where her mom remarries and makes her move into a small house with four cats. After Holly finally gets used to that situation, the family moves again into a bigger house and decides that they are going to have a baby. Freeman uses Holly as an example for all the young readers because most of the time one can really relate to these situations. Freeman is known for writing about the real life. One of her favorite quotes that she and another writer, Nick Hornby, share is "the plain state of being human is dramatic enough for anyone." All of Freeman's works relate to the real life and involve situations that can be found in someone's everyday life. Instead of writing about things that could never happen, she writes in a humorous fashion about what every kid could relate to in some sense.

After many years as a resident of State College, Pennsylvania, Martha Freeman since moved to Boulder, Colorado.