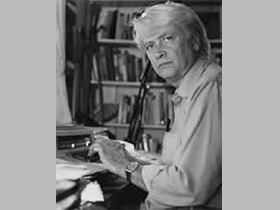 Gardner was very accomplished in the literary world as an author, translator, poet, and critic. One of his most famous works is the novel Grendel.

Born on July 21, 1933, John Gardner was a novelist, literary critic, and university professor. After the publication of his 1971 novel, Grendel and the 1972 novel The Sunlight Dialogues, Gardner became known for his unique writing style and controversial subject matter. The author later went on to publish three more bestselling books. He also founded and edited MSS, a literary magazine. Additionally, Gardner founded and directed the writing program at the State University of New York at Binghamton. However, his successful career would not continue for long. After surviving colon cancer, Gardner died in a motorcycle accident on September 14, 1982 in Susquehanna, Pennsylvania. He was only 49.

John Champlin Gardner, Jr. was born on July 21, 1933 in Batavia, New York. Gardner's childhood was spent on his family's two farms in Batavia with his parents John Champlin and Priscilla Jones Gardner. Growing up, Gardner was surrounded by literature. His mother was an English teacher and his father a lay preacher. Gardner's parents were knowledgeable of literature and could recite large sections of Shakespeare's work from memory. When Gardner was a boy, his younger brother Gilbert was tragically killed in a farming accident, an event that would influence the author in his writing. Gardner was heavily influenced by music, and he was given Saturdays off from farm work to listen to classical music on the radio. Additionally, Gardner's mother enrolled him in French horn lessons in Rochester, New York where he proved to be a very talented musician.

John Gardner entered DePauw University in 1951, because of its strong liberal arts and music programs. Gardner first considered chemistry as his field of study. However, he did well in English classes and decided to make literature his life's work. Gardner left DePauw in 1953 after marrying Joan Louise Patterson on June 6 of that year, with whom he later had two children, Joel and Lucy. He then attended Washington University in Saint Louis and graduated Phi Beta Kappa with his A.B. in 1955. He was also awarded the prestigious Woodrow Wilson Fellowship but was not interested in becoming a scholar. Gardner went on to get his M.A. from the State University of Iowa (now the University of Iowa) in 1956 and his Ph.D. two years later in 1958.

Although Gardner did get many of his ideas for later works while still in college, he did not start his professional life as a novelist until later. Instead, he began by teaching medieval literature and creative writing at a variety of colleges, beginning at Oberlin College in Ohio. Gardner moved from one university to the next, often due to his controversial ways of teaching and thinking. Gardner published a textbook, Forms of Fiction with Lennis Dunlap in 1961 and a translation, The Complete Works of the Gawain-Poet, on his own in 1965 before becoming a novelist. Additionally, he published a number of scholarly articles, including "Papers on the Art and Age of Geoffery Chaucer," co-edited with Nicholas Joost. The Resurrection, Gardner's first novel, was published in 1966 without much acclaim. Granville Hicks of the Saturday Review wrote "I find the book pretty muddled," and no great praise was given to the author for his work. Gardner tried to emulate William Faulkner's writing style in his second published novel, The Wreckage of Agathon (1970). The novel, which takes place in ancient Sparta is very philosophical, and includes a main character patterned after Gardner. Yet, the book was criticized by Time as being "more hysterical than historical."

However, John Gardner's career as a novelist soon changed. He received a grant to work on the novel Grendel, which recounts the Beowulf story from the monster's point of view, in May 1969. The author was able to finish the book in 1970 and get the book published the following year. Unlike Gardner's earlier work, Grendel incorporated alliterative and poetic qualities, creating a unique writing style which set him apart from other writers. This new style impressed both critics and readers. Richard Locke of the New York Times called the novel, "an extraordinary achievement," adding that "John Gardner has become a major contemporary American writer." In 1971 the novel was named one of the year's best fiction books by both Time and Newsweek. Grendel's overwhelming success established John Gardner's reputation as a writer and novelist.

Gardner's version of the Beowulf story puts a twist on the original tale. Grendel includes a great deal of focus on Grendel's life before his encounter with Beowulf. In the book, the monster, Grendel, is not portrayed as monstrous or evil. Instead, the character is intelligent and well-spoken. Additionally, Grendel does not view everything in life as being negative. Rather, he theorizes about his life, adding a deeper dimension to the Grendel character. After analyzing his own life, the main character realizes that he has difficulty relating to other characters, especially his own mother, due to the fact that she cannot talk, while he can. One of the biggest differences between Grendel and Beowulf is the idea that Grendel is weak and even shows fear, especially toward the dragon. Interestingly, Beowulf's name is never even mentioned in the book, putting all of the emphasis on Grendel. Gardner's book is full of theory; at the end of the book, the author writes, "Only in a world where everything is patently being lost can a priest stir men's hearts as a poet would by maintaining that nothing is in vain." It can be said that this comment is actually John Gardner's critique of his own life as a poet and member of society.

Because of Grendel's great success, Gardner's publisher agreed to publish The Sunlight Dialogues, a book which had previously been turned down for publication. Once again, John Gardner received high praises for his work. Christopher Lehmann-Haupt of the New York Times declared Gardner to be, "a major American writer whose promise for the future now seems unlimited." The Sunlight Dialogues remained on the New York Times best seller list for 16 weeks.

John Gardner's career continued to be overwhelmingly successful. In 1972 he was awarded the National Education Award, followed by the Danforth fellowship for 1972-73, and the prestigious Guggenheim Fellowship for 1973-74. After receiving the Guggenheim grant in spring of 1973, Gardner stopped teaching completely in order to focus on his writing. He no longer had to rely on teaching in order to support himself and his family and was instead able to put all of his efforts into writing. Gardner's dedication to his work paid off. In 1976, the author's book October Light was named one of the 10 best books of 1976 by Time and the New York Times. October Light also received the National Book Critics Circle Award for fiction that same year. Gardner's success granted him fame, and the author often traveled and lectured around the United States and even internationally, talking about his most recent work.

In addition to writing novels, John Gardner also wrote children's tales based on classic stories, such as Sir Gawain and the Green Knight, in order for kids to become familiar with more sophisticated literature. In 1975, the New York Times named the author's collection of children's stories, Dragon, Dragon and Other Tales, Outstanding Book of the Year. The author also worked on translations of epic tales. For eighteen months, between 1974 and 1976, Gardner studied the tale of Gilgamesh, a king who holds great power over his people by trapping them in and surrounding them with walls. The author was commissioned to turn the ancient Mesopotamian story into poetry accessible by a wide audience of readers. In 1976 he began the task.

Gardner's personal life became complicated around the same time he began the translation. After being diagnosed with colon cancer and having two operations to treat the disease, Gardner became weak and less able to focus on his writing. However, he continued to teach in the M.F.A. program at the State University of New York (SUNY) at Binghamton, where he worked with Liz Rosenberg, another professor. Recently divorced from his first wife, Gardner and Rosenberg decided to marry.

On Valentine's Day of 1980, John Gardner married Liz Rosenberg, but the union would not last long. The couple moved to Lanesboro, Pennsylvania, near the Pennsylvania — New York border. They later moved to Susquehanna, Pennsylvania, to be nearer to friends and work at SUNY—Binghamton. Only two years later, in 1982, the couple separated after Gardner became romantically involved with another writer, Susan Shreve.

On September 14, 1982, just days after finishing the translation of Gilgamesh and two weeks before his marriage to Susan Shreve, John Champlin Gardner, Jr. was killed in a motorcycle accident in Susquehanna, Pennsylvania on his way to teach at SUNY—Binghamton. He was just 49 years old.

This biographical sketch was prepared by Kim Murray.