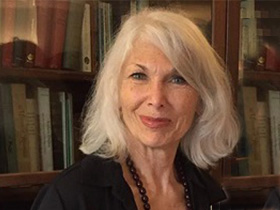 Children's book author Lindsay Barrett Georgeis widely known for her books about natureand has been both a successful writerand illustrator. She has won a Carolyn Field Award (1990), the top prize of the Pennsylvania Library Association, and had her title Inside Mouse, Outside Mouse(2004)selected by the Pennsylvania Center for the Book's 2004 Baker's Dozen Best Books for Family Literacy and for the Pennsylvania One Book, Every Young Child program, among many honors.At the time of this writing, George continues to live partime in White Mills, Pennsylvania.

Lindsay Barrett was born on July 22, 1952 in the Dominican Republic. Her parents were Hugh Campbell Barrett, a brewmaster, and Beryl Furet Barrett, a homemaker. In 1984 Barrett married William Trimpi George, with whom she had two children.

George began her education at the Boston Museum School of Fine Arts from 1972-1973. She went on to earn a BFA degree from Manhattanville College in 1974. She also received an MA and an MFA from the University of Wisconsin-Madison. Though she has been painting since she was young, she did not write her first book until after she was married. In 1987, after she and her husband had moved to Pennsylvania, she wrote and illustrated William and Boomer.

George writes and illustrates books for children that teach them about nature and the animals that can be observed therein. She has also illustrated books her late husband William wrote. George's books have been praised for their accurate view of nature, their accessibility for children, and their helpfulness in teaching classes on nature.

George continues to live and write in White Mills, Pennsylvania.