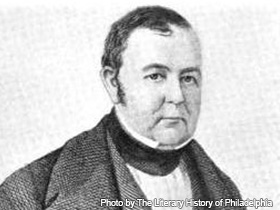 Louis Antoine Godey was born poor and followed his dreams to become a successful publisher. With his move to Philadelphia came success as Louis Antoine Godey published the Godey's Lady's Book, which informed women of the latest style and "lady-like" ways based on French lifestyle. This was the first successful women's fashion magazine in the United States. He died November 29, 1878, as a successful pioneer of French and American fashion and of cultural magazines.

Louis Antoine Godey was born in New York City on June 6, 1804. Godey's parents were survivors of the French Revolution. Godey and his parents grew up poor, and even though Godey did not attend school, he educated himself through his early years. At the young age of fifteen, Godey started to work for a city newspaper in New York City as a paperboy. After several years working for a New York City newspaper, Godey saved enough money to quit his job and moved to Philadelphia to work as a "scissors editor," (asFred Lewis Pattee called it in The Feminine Fifties ), for Charles Alexander on the Daily Chronicle. There he worked in Philadelphia County for two years before releasing his first Lady's Book. This book was comprised of article clippings from French publications. This book was an important factor in the spreading of French ideas and culture throughout American culture.

The release of the Lady's Book would make Godey "the guiding star of female education, the beacon light of refined taste, pure morals, and practical wisdom." The Godey's Lady's Book brought 150,000 subscribers information on fashions and etiquette, along with receipts, patterns, house plans, crafts, helpful hints, health advice, short stories, poetry, book notices, and musical scores all designed to inform "women" how to be "ladies." Also, feminine culture was strengthened throughout the United States with the publication of this book. Ladies were also given style ideas and what type of clothing was popular at the time. Godey contributed fashion to the magazine from French fashion. After several years he stopped using French fashion and hired other writers to come up with fresh American ideas. One main reason for the magazine to be the first successful woman's magazine in the United States was the hiring ofSarah Josepha Hale as the magazine's literary editor. Godey hired Hale to write about the importance of advanced education for young women. Hale was also the author of the famous poem "Mary's Lamb." Others who contributed to the magazine were Eliza Leslie, William Cullen Bryant, Harriet Beecher Stowe, and Nathaniel Hawthorne.

With popularity came success. Godey soon became wealthy and shortly after opened up his own magazine company. The Godey's Lady's Book continued to be successful throughout the years. On August 31, 1833, Louis Antoine Godey married Maria Duke and during their marriage they had five children together. After over ten years of success of the Lady's Book, Godey published the Lady's Musical Library (1842) and The Young People's Book (1841). These both brought useful and entertaining knowledge to readers, but weren't quite as popular as Godey's Lady's Book. Success came at a time when the United States felt inferior to the European Continent, especially when it came to fashion.

Godey is quoted in the History of American Magazines as saying, after retiring from the Lady's Book, "that not an immoral thought or profane word could be found in its pages during the entire period of his connection with it." Glenda Riley writes in her article, Origins of the Argument, that "many of Godey's employees found him to be considerate, conservative, and a generous friend throughout the years." Publishing a successful periodical for the elevation of American "womanhood" was his great adventure. Godey retired to St. Augustine, FL and shortly became ill. Godey died in Philadelphia November 29, 1878, reading Anne of Geirstein in his favorite armchair. Louis Antoine Godey lived throughout a rough period of American history but he brought forth woman's fashion and ladylike culture.