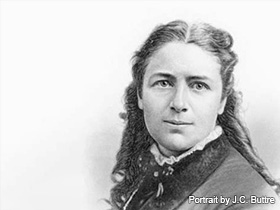 Although mostly known as a suffragist and an attorney, Gordon also worked as a journalist for several newspapers in California.

Legal and publishing pioneer Laura de Force Gordon was born on August 17, 1838, in North East, Pennsylvania. Though growing up in strained financial circumstances, Laura de Force was well-educated and became an accomplished orator. Marrying Dr. Charles Gordon, she moved to Nevada and then to California, becoming a suffragist and journalist. She was the first woman to run a daily newspaper (the Stockton Daily Leader). She was instrumental in the passage of the "Women's Lawyers Bill," which allowed women to practice any profession in California. Laura deForce Gordon then became a successful lawyer for 20 years. Laura de Force Gordon died on April 5, 1907.

Laura deForce was born in North East, Pennsylvania on August 17, 1838, to Catherine Doolittle Allan and Abram de Force, one of nine children both to the couple. For much of her early life, de Force's father was unable to work because of a lengthy struggle with rheumatism. His condition compelled de Force's mother to support the family through her needlework and lace making. Despite the burdens on a family in such difficult circumstances, young Laura and another sister were both educated in the Erie County (Pennsylvania) and Chautauqua County (New York) schools. This experience would initiate the oral and written communication skills for which she would became so well-regarded during the rest of her life.

On the death of one of her brothers in 1855 a profound change happened to de Force's family. Stricken with grief, her mother turned to the comforts of Spiritualism, a faith that promoted contact with the dead via trances and séances. Young Laura adopted the faith along with much of her family. Laura became particularly gifted at "trance speaking" and soon traveled the Northeast as a sought-after speaker. During a speaking tour to New England, she met Dr. Charles H. Gordon, whom she would marry in 1862. Eventually the couple moved west, first to Nevada and then to Lodi, California. While there, Laura Gordon's career as a Spiritualist intersected with the budding Suffrage Movement and resulted in her being well-known throughout the country's suffrage organizations.

Her lectures gradually turned from Spiritualism to the subject of Women's Suffrage. On February 19, 1868, she gave an important address in Platt's Hall in San Francisco on the movement. She was so successful that later that year she began organizing delegates for the California Woman's Suffrage Association, founded January 26, 1870. This experience made her known in suffrage circles and Gordon was esteemed by both Elizabeth Cady Stanton and Susan B. Anthony.

In addition to advancing her cause through her oratory, Gordon entered the journalistic profession, a long-time dream of hers. She first became an editor/reporter for the women's department of the Stockton Narrow Gauge in 1873. Later that year she published the Stockton Weekly Leader and turned it into a daily paper in 1874. She is acclaimed as the first woman in the world to publish a daily newspaper. Gordon sold the Daily Leader and in 1876 bought the Oakland Daily Democrat, which she published until she left journalism in 1878. While running the Oakland Daily Democrat, she and her husband were divorced. During this same time, Gordon published her only book, The Great Geysers of California and How to Reach Them (1877), a travel guide to the geysers and springs of the Napa Valley.

Though unable to participate in the legislature, Gordon covered the progress of a proposal she had vigorously supported: the "Women Lawyers Bill." By title the legislation dealt only with the legal profession; in practice, it became a provision in the California state constitution granting women the right to practice whatever profession they chose. This constitutional amendment took effect in 1878, the same year in which Gordon and Clara Foltz applied to the Hastings College of Law, but were denied admission. The two won the subsequent lawsuit, and before being able to officially enter law school, both Gordon and Foltz had become so proficient with the law by their own study that they were admitted to the California Bar on December 6, 1879.

In 1880, Laura deForce Gordon opened her own law firm in San Francisco. She practiced both general law and criminal defense. One of her early defense cases was that of an Italian immigrant; the Royal Italian Literary Society of Rome made her an honorary member for saving him from the death penalty. Gordon was also the second woman to be admitted to the Bar of the United States Supreme Court in 1883. She maintained her legal practice for some twenty years, earning widespread respect in California and beyond.

While maintaining her law practice, Gordon continued to be a sought-after speaker and suffragist. The New York Times (via the San Francisco Call) described her appearance at the 1880 Independence Day celebrations at Sutter Creek, California:

The orator of the day, Laura deForce Gordon, delivered a fine address, replete with humorous allusions to woman's rights and the men for once having to take a back seat, interspersed with serious and patriotic references to the dark days of our Republic and the glorious future to which it will attain. The fair oratress was loudly applauded during her remarks, and at the close a gentleman—the first and only time one of that humbled sex even tried to speak—proposed that every man present join in three rousing cheers for the orator of the day, which were given with a will.

Gordon's last years were spent on her farm in Lodi, California. This farm was quite successful; Clara Bewick Colby describes her as having "been instrumental in starting the silk culture in California."

Her time on the farm began to come to an end in late 1906 with the death of her adoptive son's child. She wrote to Clara Colby of "the taking away of my precious baby boy, Verne's child, which has nearly wrung the soul out of me." She seems never to have recovered from that blow. Catching a severe cold on a trip to Los Angeles in March 1907, Laura deForce Gordon died in Lodi on April 5, 1907. She is buried in the Harmony Grove Cemetery in Lockeford, California.