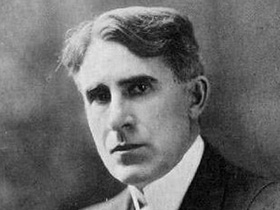 Zane Grey, considered by many to be the father of the modern western, made his home in Lackawaxen, now the site of the Zane Grey Museum.

Zane Grey was the bestselling Western author in American history. He was born in Ohio in 1871 and gave up his dental practice to follow his dream of writing. He was never critically acclaimed but wrote almost 90 novels before his death in 1939.

Grey studied dentistry at the University of Pennsylvania on a baseball scholarship and graduated in 1896. Soon after, he opened a dental practice in New York City. His first attempt at following his dream of writing came in 1903 with his novel, Betty Zane, a fictional account of his Ohio ancestors. After his marriage in 1905, he gave up dentistry and moved to Lackawaxen, Pennsylvania to pursue his writing career.

With the publication of Heritage of the Desert (1910), Grey found a successful formula for his novels. Many of his stories and novels, such as The Last of the Plainsmen (1908), are based on his experiences and adventures. The primary formula for his Westerns is as follows: an easterner learns to survive in the West and lives happily with the woman he loves. Through modifications in his formula, Grey produced many bestsellers throughout his lifetime.

Though never critically acclaimed or acknowledged, Grey is the bestselling Western author in American history. He published nearly 90 novels in all—many posthumously—60 of which were Westerns. His novels and stories have been translated into many different languages and adapted into 105 feature films.

Grey died of heart failure on October 23, 1939, in Altadena, California and was buried in Lackawaxen, Pennsylvania in the National Park Service's Upper Delaware Scenic and Recreational River area.