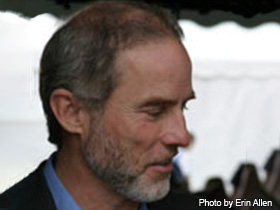 John Grogan is the author of Marley and Me and former columnist for the The Philadelphia Inquirer.

On March 20, 1957, John Grogan was born in Detroit, Michigan. He discovered his interest in writing at a young age and pursued his passion at Central Michigan University, majoring in English and journalism. He worked as a journalist and columnist for many years. Grogan's first book, Marley & Me: Life and Love with the World's Worst Dog, brought him fame, spending 76 weeks on the bestseller list. His acclaimed first book was made into a major motion picture in 2008. That same year he also published his second book, The Longest Trip Home: A Memoir, which grapples with the intersection of themes like family and identity. At the time of this writing, Grogan, his wife Jenny, and their three children live in eastern Pennsylvania with their Labrador retriever Woodson.

John Grogan was born on March 20, 1957, in Detroit, Michigan, and is the youngest of four children. Shortly after his birth, his family moved from the city to Orchard Lake, Michigan, where he grew up in the neighborhood called Harbor Hills, which is the setting for his second memoir, The Longest Trip Home. His father worked as an engineer for General Motors, and his mother worked as a housewife and mother. Grogan notes that his mother's passion and gift for storytelling "wore off" on him.

Grogan claims that he fell into writing "by default because [he] was so bad at everything else," and he "could have some fun with" writing, unlike other subjects like math and science. During his high school career, Grogan wrote for the school newspaper and created an underground tabloid; he was sent to the principal's office for his involvement in the latter journalistic endeavor.

After high school, Grogan attended Central Michigan University, where he majored in journalism and English. He also worked for the campus newspaper and graduated in 1979.

Upon graduation, Grogan began working as a police reporter for the Herald-Palladium, a newspaper located in the small town St. Joseph, Michigan. This was his first full-time writing job and is where he met his future wife, Jenny, who was a fellow reporter on staff.

Grogan then won a fellowship to attend Ohio State University's Kiplinger Mid-Career Program in Public Affairs in 1985, which he refers to as his "ticket out of small town journalism." After earning his master's degree from Ohio State University, Grogan won a second fellowship to attend the Poynter Institute for Media Studies, which is located in St. Petersburg, Florida.

After finishing his second fellowship, Grogan chose to remain in Florida, working as a journalist at the South Florida Sun-Sentinel in Fort Lauderdale, and Jenny soon joined him there, taking a job writing features at The Palm Beach Post. Grogan was then promoted from bureau reporter to metropolitan columnist, a job he "found suited [him] better than [he] imagined any job could." He and Jenny married shortly after settling in Florida and adopted Marley, a Labrador retriever puppy. Marley was a rambunctious and lovable pup affectionately nicknamed "the world's worst dog" and ended up providing Grogan with much material and fodder for his columns and future bestselling book.

Grogan's next career change occurred when he became editor of Organic Gardening magazine, requiring him to move to rural eastern Pennsylvania. However, after three years, Grogan began to miss working for a newspaper and started working as a columnist at the Philadelphia Inquirer.

In 2003, when Grogan's dog, Marley, died at age thirteen, Grogan wrote a column honoring him, and he received over 800 responses from Inquirer readers, a huge jump from the typical number of responses. The readers' large response and interest in Marley sparked Grogan's decision to write a book, causing him to realize he had "a bigger story to tell" and "owed it to Marley to tell the rest of the story."

In 2004, Grogan began writing Marley & Me. He wrote from 5 to 7 a.m. every morning before writing his column for the Inquirer. Marley & Me is an international bestseller, having sold over five million copies in over thirty languages. It spent 76 weeks on the bestseller list, and 23 of those weeks it stood at the prized #1 spot. His first book earned him Quill Awards in both the Audiobook and Memoir/Biography categories in 2006. Additionally, Marley & Me was made into a hit motion picture in 2008, starring A-list actors like Jennifer Aniston and Owen Wilson.

In 2007, Grogan decided to step down from his position at the Philadelphia Inquirer so that he could spend more time writing his second book, The Longest Trip Home, which was published in 2008. The Longest Trip Home is a coming of age memoir about Grogan's relationship with his family, particularly with his parents, ultimately stressing the "powerful love of family." According to his website, it is "a book for any son or daughter who has sought to forge an identity at odds with their parents', and for every parent who has struggled to understand the values of their children."

Grogan's passion for writing is evident in all of his works and also in his interviews. Grogan shares his insights on the role honesty plays in one's writing, fully believing that "any writer has to look in the mirror and ask: 'Can I tell this story truthfully and honestly and candidly without holding back?' If the answer is no, or even 'I'm not sure,' the writer needs to find a new topic." Grogan intends to practice what he preaches, noting that with both his memoirs, he "took an oath" to maintain factual accuracy.

Grogan emphasizes how it is difficult for an author to predict what course a book will take when he or she begins writing. He says, "...writing a book can sometimes feel like an out-of-body experience. There are times when I'm writing and the words are flowing, and they are leading in directions I did not anticipate....Writing is a little like using a Ouija board. You rest your fingers on the keyboard and are sometimes amazed at what comes out."

John Grogan and his wife Jenny have three children together: Patrick, Conor, and Colleen. AT the time of this writing, he and his family live in Pennsylvania with their lab Woodson. Woodson was one of the dogs who portrayed Marley in the film version and was given to the Grogan's at the end of production. Their other dog Gracie, who they adopted after Marley died, passed away in early 2011.