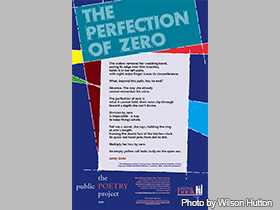 Poet Luray Gross was born in Doylestown and attended Central Bucks High School, Gettysburg College, and Trenton State College. Forenoon (1990) and Elegant Reprieve (1996) are among her poetry chapbooks. In 2000, she was named a Distinguished Teaching Artist and was also the recipient of the Robert Fraser Open Poetry Competition Award. She was the 2002 Poet Laureate of Bucks County, Pennsylvania. She published a volume of poetry, The Perfection of Zeros, in 2004. She has also worked as a Writer-in-Residence through the New Jersey State Council on the Arts, a Visiting Poet for the Geraldine R. Dodge Foundation, and a Teaching Artist with Storytelling Arts, Inc. of Kingston, New Jersey. In 2008, she was a featured poet in the Public Poetry Project of the Pennsylvania Center for the Book. At the time of this writing, she serves as a Poetry Editor for the Mercer County Community College literary journal, Kelsey Review. Gross was awarded the 2012-2013 Author-in-Residence Grant from the Hopewell Valley Education Foundation (hvef) and, at the time of this writing, resides in Bucks County, Pennsylvania.

Poet and educator Luray Gross was born to Rachel Hindenach Gross and Raymond Gross in Doylestown, Pennsylvania, where she grew up on a busy dairy farm. She later attended Central Bucks High School, and after receiving her BA in English from Gettysburg College in 1971, she she earned her MA in English from Trenton State College (now the College of New Jersey) in 1980. A professor and colleague at Trenton State College, Peter Wood, later gave her encouragement to become a public poet when she taught there.

Gross was first published in the 1980's in a literary review at Trenton State College. She has provided workshops and performances for students K through 12, teachers, and the general public since 1989. She has also published two chapbooks of poetry, Forenoon (1990) and Elegant Reprieve, which won the 1995-1996 Still Waters Press Poetry Chapbook Competition. After teaching four years of high school English, she served ten years as an Adjunct Instructor of English at The College of New Jersey.

In 2000, Gross was named a Distinguished Teaching Artist and also received the Robert Fraser Open Poetry Competition Award, which awards a scholarship to a dedicated writing student with funds raised during the competition. She then became the Poet Laureate of Bucks County in 2002.

Her first full-volume of poetry, The Perfection of Zeros, was published in 2004. Gross has said that the themes in her poetry explore the mysterious nature of our ability to go on, the sufficiency of the ordinary, and the sustaining and encouraging influence of the natural world. The first stanza of her poem "Wound" serves to exemplify these themes:

There is a mouth, and the mouth

There is a cave, and its sides are wet.

There is a flower, and its throat is warm.

where muscle and skin ought to be.

When asked which poets inspired her, she replied, "John Keats made me swoon.Reading William Carlos Williams taught me that my own language and life could be the materials of poetry. Walt Whitman inspired largess. Theodore Roethke gave me music. Elizabeth Bishop, exactitude and reserve. Robert Bly, enthusiasm. William Stafford, faith in going forward."

She credits traditional storytelling skills for providing her balance in her art. "In learning a story from the oral tradition," she said, "I have the privilege of inhabiting material that I did not create. My own telling, of course, contributes to the life of each story, but I am relieved of the burden of being the sole creator. I value the collaborative nature of that art, as I value the way my poetry is enriched by other poems and by music and visual art."

Her poem, "The Perfection of Zero," was selected by the Public Poetry Project of the Pennsylvania Center for the Book in 2008.

In 2006, she was resident faculty at the Frost Place Festival and Conference on Poetry in Franconia, New Hampshire, and was recently awarded the 2012-2013 Author-in-Residence Grant from the Hopewell Valley Education Foundation (hvef) to create poetry and a "Poetry on Parade" performance with third graders; the students proudly read their poems with their own art as backdrop and with theatrical and musical accompaniment, facilitating the children's creativity and public speaking skills.

Luray Gross resides in Plumstead Township, Bucks County, Pennsylvania. She works as a Writer-in-Residence through the New Jersey State Council on the Arts, a Visiting Poet for the Geraldine R. Dodge Foundation, and a Teaching Artist with Storytelling Arts, Inc. of Kingston, New Jersey. She is also a Poetry Editor for the Mercer County Community College literary journal, Kelsey Review.

Gross is currently working on a second full-length volume of poems and has said that "in poems I'm speaking, it seems, with my authentic voice, relieved in some mysterious way from the embarrassments and limitations of selfhood."