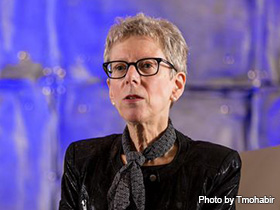 Philadelphia's Terry Gross was born in Brooklyn in 1951. After taking degrees at the State University of New York at Buffalo, she began a brief career in teaching before entering the radio industry. Since 1975, she has hosted various incarnations of the public radio show Fresh Air. Her work has earned her both the George Foster Peabody and Edward R. Murrow Awards. She continues to broadcast from the studios of WHYY in Philadelphia.

Radio broadcaster Terry Gross was born in 1951 in the Sheepshead Bay neighborhood of Brooklyn, New York. She was the only daughter of Anne and Irving Gross; she also had an older brother, Leon. They lived in a very crowded apartment complex in a largely Jewish portion of the city and she remarked in the introduction to her 2004 book All I Did Was Ask that she thought that the "Catholic family across the street was an embattled minority." Gross and others attribute her well-known reticence to speak of her own life to the lack of privacy in such a heavily populated environment. She would leave New York City for Buffalo, earning both a BA and an MA at the State University of New York at Buffalo. After her graduation, she first attempted to become an eighth grade teacher in Buffalo, but was fired before Christmas, having felt poorly equipped for such a position.

Gross' career in radio began in 1973 at Buffalo's WBFO public station. Within two years she had moved to Philadelphia's WHYY to become a producer and host of Fresh Air, a live, local interview show. Fresh Air went national in 1985 and then increased to a full hour in 1987 as the lead-in program to All Things Considered.

During her years in broadcasting, Terry Gross has earned an excellent reputation among critics and her peers alike. Media critics have praised her and touted the qualities of her voice. Michael Phillips wrote in the Chicago Tribune that "her delivery is one of the indelible beauts of contemporary radio." Scott Simon prefaced his own interview on NPR's Weekend Edition with Terry Gross by saying she "is the best interviewer in the United States."

Not all guests have been as fulsome in their praise of Gross' interviews. Once when interviewing actress and acting teacher Uta Hagen, Gross asked about acting techniques. Upon learning that Gross was not an actress, Hagen replied that such techniques were none of her business. Musician Lou Reed stalked off the show. She said in Philadelphia Magazine that her rather strange interview with Gene Simmons of the rock group Kiss was "one of the high points of the show. You don't hear many guests telling public radio hosts that if they want to welcome them with open arms, they also have to welcome them with open legs." Most recently aggressive conservative television interviewer Bill O'Reilly left the show in a huff when he thought she'd treated him less favorably than liberal commentator Al Franken. Gross told Publishers Weekly that she didn't "mind when an interview goes that way. On the other hand, I don't want to go looking for it. I don't want to do it just for the sake of generating controversy or ratings, because I think that's the position commercial radio is in, and that's why I'm on public radio."

Her peers in the broadcasting world, however, have honored her with some of their greatest awards. In 1993, Fresh Air with Terry Gross was given the prestigious George Foster Peabody Award for excellence in journalism. The Peabody Award citation read, in part: "'Fresh Air' is a breezy and brilliant weekday magazine of contemporary culture and public affairs...Ms. Gross asks thoughtful, unexpected questions...breathing 'fresh air' into talk radio." In 2003, Gross was given the Edward R. Murrow Award by the Corporation for Public Broadcasting (CPB) for "foster[ing] public radio's quality and service and shap[ing] its direction." CPB's president Robert T. Coonrod said in the press release announcing the award that "Terry Gross embodies public radio's core values: curiosity, intelligence, respect for her subjects, and concern for listeners."

In 2004, she published a collection of interviews, All I Did Was Ask. In it, she wrote briefly of some of her famous interviews, as well as her philosophy of conducting interviews. Aside from the practical concerns of saving the station money by not flying guests on the show to Philadelphia, Gross writes that the long distance "often makes [the interview] easier." She also tells guests that if she asks a question that crosses a line, they should tell her and she will move on. That proviso allows her to feel free to ask anything since the choice to answer or not, even if that means she transgresses "many rules of polite conversation." Nevertheless, she remains a very popular host and a well-regarded one. Gross continues her nightly broadcasts from Philadelphia where she lives with her husband, jazz critic Francis Davis.